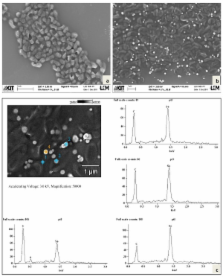 Selenium (Se) is an essential trace element, but is toxic at high concentrations. Depending upon the geological background, the land use or on anthropogenic pollution, different amounts of Se may be present in soil. Its toxicity is related to the oxyanions selenate and selenite as they are water soluble and bioavailable. Microorganisms play an important role in Se transformations in soil and its cycling in the environment by transforming water-soluble oxyanions into water insoluble, non-toxic elemental Se (0). For this study, soil samples were collected from selenium-contaminated agricultural soils of Punjab/India to enrich and isolate microbes that interacted with the Se cycle.

A mixed microbial culture enriched from the arable soil of Punjab could reduce 230 mg/l of water soluble selenite to spherical Se (0) nanoparticles during aerobic growth as confirmed by SEM-EDX. Four pure cultures (C 1, C 4, C 6, C 7) of Gram negative, oxidase and catalase positive, aerobic bacteria were isolated from this mixed microbial consortium and identified by 16 S rDNA gene sequence alignment as two strains of Duganella sp. (C 1, C 4) and two strains of Agrobacterium sp.(C 6, C 7). SEM/TEM-EDX analyses of the culture broth of the four strains revealed excretion of uniformly round sharply contoured Se (0) nanoparticles by all cultures. Their size ranged from 140–200 nm in cultures of strains C 1 and C 4, and from 185–190 nm in cultures of strains C 6 and C 7. Both Duganella sp. revealed better selenite reduction efficiencies than the two Agrobacterium sp.

This is the first study reporting the capability of newly isolated, aerobically growing Duganella sp. and Agrobacterium sp. from soils of Punjab/India to form spherical, regularly formed Se (0) nanoparticles from water soluble selenite. Among others, the four strains may significantly contribute to the biogeochemical cycling of Se in soil. Bioconversion of toxic selenite to non-toxic Se (0) nanoparticles under aerobic conditions in general may be useful for detoxification of agricultural soil, since elemental Se may not be taken up by the roots of plants and thus allow non-dangerous fodder and food production on Se-containing soil.

S. Langley,  Mitchell Herbel,  Stephen S. Curran … (2003)
Certain anaerobic bacteria respire toxic selenium oxyanions and in doing so produce extracellular accumulations of elemental selenium [Se(0)]. We examined three physiologically and phylogenetically diverse species of selenate- and selenite-respiring bacteria, Sulfurospirillum barnesii, Bacillus selenitireducens, and Selenihalanaerobacter shriftii, for the occurrence of this phenomenon. When grown with selenium oxyanions as the electron acceptor, all of these organisms formed extracellular granules consisting of stable, uniform nanospheres (diameter, approximately 300 nm) of Se(0) having monoclinic crystalline structures. Intracellular packets of Se(0) were also noted. The number of intracellular Se(0) packets could be reduced by first growing cells with nitrate as the electron acceptor and then adding selenite ions to washed suspensions of the nitrate-grown cells. This resulted in the formation of primarily extracellular Se nanospheres. After harvesting and cleansing of cellular debris, we observed large differences in the optical properties (UV-visible absorption and Raman spectra) of purified extracellular nanospheres produced in this manner by the three different bacterial species. The spectral properties in turn differed substantially from those of amorphous Se(0) formed by chemical oxidation of H(2)Se and of black, vitreous Se(0) formed chemically by reduction of selenite with ascorbate. The microbial synthesis of Se(0) nanospheres results in unique, complex, compacted nanostructural arrangements of Se atoms. These arrangements probably reflect a diversity of enzymes involved in the dissimilatory reduction that are subtly different in different microbes. Remarkably, these conditions cannot be achieved by current methods of chemical synthesis.

Konrad H. Paszkiewicz,  Charles Debieux,  Elizabeth Dridge … (2011)
During selenate respiration by Thauera selenatis, the reduction of selenate results in the formation of intracellular selenium (Se) deposits that are ultimately secreted as Se nanospheres of approximately 150 nm in diameter. We report that the Se nanospheres are associated with a protein of approximately 95 kDa. Subsequent experiments to investigate the expression and secretion profile of this protein have demonstrated that it is up-regulated and secreted in response to increasing selenite concentrations. The protein was purified from Se nanospheres, and peptide fragments from a tryptic digest were used to identify the gene in the draft T. selenatis genome. A matched open reading frame was located, encoding a protein with a calculated mass of 94.5 kDa. N-terminal sequence analysis of the mature protein revealed no cleavable signal peptide, suggesting that the protein is exported directly from the cytoplasm. The protein has been called Se factor A (SefA), and homologues of known function have not been reported previously. The sefA gene was cloned and expressed in Escherichia coli, and the recombinant His-tagged SefA purified. In vivo experiments demonstrate that SefA forms larger (approximately 300 nm) Se nanospheres in E. coli when treated with selenite, and these are retained within the cell. In vitro assays demonstrate that the formation of Se nanospheres upon the reduction of selenite by glutathione are stabilized by the presence of SefA. The role of SefA in selenium nanosphere assembly has potential for exploitation in bionanomaterial fabrication.

[1 ]Institute of Biology for Engineers and Biotechnology of Wastewater, Karlsruhe Institute of Technology, 76131, Karlsruhe, Germany