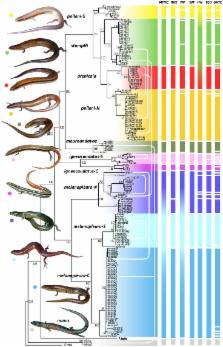 Delimiting and describing species is fundamental to numerous biological disciplines such as evolution, macroecology, and conservation. Delimiting species as independent evolutionary lineages may and often does yield different outcomes depending on the species criteria applied, but methods should be chosen that minimize the inference of objectively erroneous species limits. Several protocols exploit single-gene or multi-gene coalescence statistics, assignment tests or other rationales related to nuclear DNA (nDNA) allele sharing to automatically delimit species. We apply seven different species delimitation protocols to a taxonomically confusing group of Malagasy lizards ( Madascincus), and compare the resulting taxonomies with two newly developed metrics: the Taxonomic index of congruence C tax which quantifies the congruence between two taxonomies, and the Relative taxonomic resolving power index R tax which quantifies the potential of an approach to capture a high number of species boundaries. The protocols differed in the total number of species proposed, between 9 and 34, and were also highly incongruent in placing species boundaries. The Generalized Mixed Yule-Coalescent approach captured the highest number of potential species boundaries but many of these were clearly contradicted by extensive nDNA admixture between sympatric mitochondrial DNA (mtDNA) haplotype lineages. Delimiting species as phenotypically diagnosable mtDNA clades failed to detect two cryptic species that are unambiguous due to a lack of nDNA gene flow despite sympatry. We also consider the high number of species boundaries and their placement by multi-gene Bayesian species delimitation as poorly reliable whereas the Bayesian assignment test approach provided a species delimitation highly congruent with integrative taxonomic practice. The present study illustrates the trade-off in taxonomy between reliability (favored by conservative approaches) and resolving power (favored by inflationist approaches). Quantifying excessive splitting is more difficult than quantifying excessive lumping, suggesting a priority for conservative taxonomies in which errors are more liable to be detected and corrected by subsequent studies.

AWTY (are we there yet?): a system for graphical exploration of MCMC convergence in Bayesian phylogenetics.

James C Wilgenbusch,  Johan Nylander,  David Swofford … (2008)
A key element to a successful Markov chain Monte Carlo (MCMC) inference is the programming and run performance of the Markov chain. However, the explicit use of quality assessments of the MCMC simulations-convergence diagnostics-in phylogenetics is still uncommon. Here, we present a simple tool that uses the output from MCMC simulations and visualizes a number of properties of primary interest in a Bayesian phylogenetic analysis, such as convergence rates of posterior split probabilities and branch lengths. Graphical exploration of the output from phylogenetic MCMC simulations gives intuitive and often crucial information on the success and reliability of the analysis. The tool presented here complements convergence diagnostics already available in other software packages primarily designed for other applications of MCMC. Importantly, the common practice of using trace-plots of a single parameter or summary statistic, such as the likelihood score of sampled trees, can be misleading for assessing the success of a phylogenetic MCMC simulation. The program is available as source under the GNU General Public License and as a web application at http://ceb.scs.fsu.edu/awty.

The integrative future of taxonomy

José M. Padial,  Aurélien Miralles,  Ignacio De la Riva … (2010)
Background Taxonomy is the biological discipline that identifies, describes, classifies and names extant and extinct species and other taxa. Nowadays, species taxonomy is confronted with the challenge to fully incorporate new theory, methods and data from disciplines that study the origin, limits and evolution of species. Results Integrative taxonomy has been proposed as a framework to bring together these conceptual and methodological developments. Here we review perspectives for an integrative taxonomy that directly bear on what species are, how they can be discovered, and how much diversity is on Earth. Conclusions We conclude that taxonomy needs to be pluralistic to improve species discovery and description, and to develop novel protocols to produce the much-needed inventory of life in a reasonable time. To cope with the large number of candidate species revealed by molecular studies of eukaryotes, we propose a classification scheme for those units that will facilitate the subsequent assembly of data sets for the formal description of new species under the Linnaean system, and will ultimately integrate the activities of taxonomists and molecular biologists.

Aurélien Miralles was supported by a postdoctoral Research Fellowship from the Alexander von Humboldt Foundation ( http://www.humboldt-foundation.de/web/home.html) and by two SYNTHESYS grants (FR-TAF-842, GB-TAF-843, http://www.synthesys.info). The funders had no role in study design, data collection and analysis, decision to publish, or preparation of the manuscript.