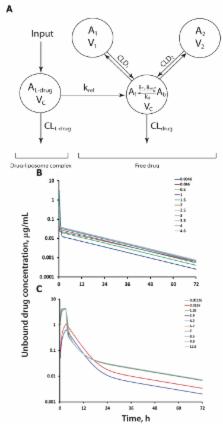 Liposomal formulations of anticancer agents have been developed to prolong drug circulating lifetime, enhance anti-tumor efficacy by increasing tumor drug deposition, and reduce drug toxicity by avoiding critical normal tissues. Despite the clinical approval of numerous liposome-based chemotherapeutics, challenges remain in the development and clinical deployment of micro- and nano-particulate formulations, as well as combining these novel agents with conventional drugs and standard-of-care therapies. Factors requiring optimization include control of drug biodistribution, release rates of the encapsulated drug, and uptake by target cells. Quantitative mathematical modeling of formulation performance can provide an important tool for understanding drug transport, uptake, and disposition processes, as well as their role in therapeutic outcomes. This review identifies several relevant pharmacokinetic/pharmacodynamic models that incorporate key physical, biochemical, and physiological processes involved in delivery of oncology drugs by liposomal formulations. They capture observed data, lend insight into factors determining overall antitumor response, and in some cases, predict conditions for optimizing chemotherapy combinations that include nanoparticulate drug carriers.

A new concept for macromolecular therapeutics in cancer chemotherapy: mechanism of tumoritropic accumulation of proteins and the antitumor agent smancs.

Yasuhiro Matsumura,  Miki Maeda (1986)
We previously found that a polymer conjugated to the anticancer protein neocarzinostatin, named smancs, accumulated more in tumor tissues than did neocarzinostatin. To determine the general mechanism of this tumoritropic accumulation of smancs and other proteins, we used radioactive (51Cr-labeled) proteins of various molecular sizes (Mr 12,000 to 160,000) and other properties. In addition, we used dye-complexed serum albumin to visualize the accumulation in tumors of tumor-bearing mice. Many proteins progressively accumulated in the tumor tissues of these mice, and a ratio of the protein concentration in the tumor to that in the blood of 5 was obtained within 19 to 72 h. A large protein like immunoglobulin G required a longer time to reach this value of 5. The protein concentration ratio in the tumor to that in the blood of neither 1 nor 5 was achieved with neocarzinostatin, a representative of a small protein (Mr 12,000) in all time. We speculate that the tumoritropic accumulation of these proteins resulted because of the hypervasculature, an enhanced permeability to even macromolecules, and little recovery through either blood vessels or lymphatic vessels. This accumulation of macromolecules in the tumor was also found after i.v. injection of an albumin-dye complex (Mr 69,000), as well as after injection into normal and tumor tissues. The complex was retained only by tumor tissue for prolonged periods. There was little lymphatic recovery of macromolecules from tumor tissue. The present finding is of potential value in macromolecular tumor therapeutics and diagnosis.

Regulation of transport pathways in tumor vessels: role of tumor type and microenvironment.

Vladimir P. Torchilin,  W Monsky,  Rishi K. Jain … (1998)
Novel anti-neoplastic agents such as gene targeting vectors and encapsulated carriers are quite large (approximately 100-300 nm in diameter). An understanding of the functional size and physiological regulation of transvascular pathways is necessary to optimize delivery of these agents. Here we analyze the functional limits of transvascular transport and its modulation by the microenvironment. One human and five murine tumors including mammary and colorectal carcinomas, hepatoma, glioma, and sarcoma were implanted in the dorsal skin-fold chamber or cranial window, and the pore cutoff size, a functional measure of transvascular gap size, was determined. The microenvironment was modulated: (i) spatially, by growing tumors in subcutaneous or cranial locations and (ii) temporally, by inducing vascular regression in hormone-dependent tumors. Tumors grown subcutaneously exhibited a characteristic pore cutoff size ranging from 200 nm to 1.2 microm. This pore cutoff size was reduced in tumors grown in the cranium or in regressing tumors after hormone withdrawal. Vessels induced in basic fibroblast growth factor-containing gels had a pore cutoff size of 200 nm. Albumin permeability was independent of pore cutoff size. These results have three major implications for the delivery of therapeutic agents: (i) delivery may be less efficient in cranial tumors than in subcutaneous tumors, (ii) delivery may be reduced during tumor regression induced by hormonal ablation, and (iii) permeability to a molecule is independent of pore cutoff size as long as the diameter of the molecule is much less than the pore diameter.