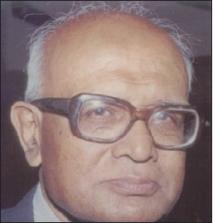 ScienceOpenPublisherPMC
Bookmark
There is no author summary for this article yet. Authors can add summaries to their articles on ScienceOpen to make them more accessible to a non-specialist audience.
Prof. A K Gupta (1917–2007) Prof. Arun Kumar Gupta was born on December 17, 1917. He obtained his M.B.B.S. in 1941 and M.S. General Surgery in 1944 from Patna Medical College. After completing his education, he joined the Short Service Commission of the Army and served in India, Malaysia, and Singapore. He left army in 1947 and went to attend United Liverpool Hospital in the UK. He got his M. Ch. (Ortho) from Liverpool in 1951 and later also obtained F.R.C.S. in 1952 from Royal College of Surgeons, England.1 Prof. A K Gupta came back to India in 1953 and joined Irwin Hospital (Today's Maulana Azad Medical College and LNJPN Hospital) in Delhi where he served till 1955. Later, he joined as a Lecturer of Orthopedics at S.N. Medical College, Agra, where he worked from 1955 to 1957. He then joined as a Reader in Orthopedics at G.S.V.M. Medical College, Kanpur, and played a key role in establishing the Department of Orthopaedics there. M.S. Ortho degree course was started here in 1960 and he trained a total of 38 M.S. and 36 D. Ortho surgeons during his tenure. A lot of his students accomplished senior professional and academic positions in India and abroad. He became Professor and Head of the same Department in 1959 and served till his retirement in 1976.1 He was completely devoted to patient care and teaching throughout his life. He was a committed teacher, diligent surgeon, and esteemed leader. Prof. Gupta was a voracious reader and had vast knowledge of orthopedic literature. His main clinical interests were rickets and osteomalacia, pediatric femoral neck fractures, osteotomies around hip, correction of foot deformities and hand and lower limb deformities of poliomyelitis, and Hansen's disease. He was an active member of Indian Orthopaedic Association (IOA) and served as its Secretary from 1963 to 1966 and then graced the Chair of Vice President of IOA in 1967. He served as President of IOA in 1975–1976 and was awarded the highest honor of “IOA - Lifetime Achievement Award” at the 51st Annual Conference of IOA in 2006 at Delhi.1 On his name, “A K Gupta Trophy” is awarded every year to the best chapter of IOA, and “A K Gupta Gold Medal” is presented to the best paper presented at UP Chapter of IOA (UPCON). UPCON 2008 and the January 2008 Issue of Bone and Joint Diseases Journal were dedicated to the commemoration of Prof. A K Gupta.1 He was diagnosed with cancer in the last 2 years of his life and left for heavenly abode on December 30, 2007, at the age of 90 years. He is remembered as a compassionate surgeon and loving teacher by all, who came in contact with him.1 Financial support and sponsorship Nil. Conflicts of interest There are no conflicts of interest.

Surya Bhan (2008)
Prof. A. K. Gupta, M.S, F.R.C.S, M.Ch.Orth 1917-2007 Professor Arun Kumar Gupta, the doyen of Indian Orthopaedics, died on 30th December 2007, just after his 90th birthday. He fought an extended battle against cancer in the last two years of his life. Throughout his active life, he displayed admirable qualities of responsibility and commitment to both patient care and teaching. Prof. A. K. Gupta was born on 17th December 1917. He entered Patna Medical College and obtained M.B.B.S. (1941) and M.S. General Surgery (1944). He then joined the Indian Army and served in India, Singapore and Malaysia. He left the Short Service Commission of the Army in 1947 and went to the UK, where he worked at United Liverpool Hospital. He obtained M.Ch. (Orth) from Liverpool (1951) and F.R.C.S. (1952) from Royal College of Surgeons, England. He was full of national pride and so returned to India in 1953 to join Irwin Hospital (now Maulana Azad Medical College and LNJPN Hospital) in Delhi where he remained till 1955. His next appointment was as Lecturer of Orthopaedics at S.N. Medical College, Agra from 1955 to 1957. He then moved to G.S.V.M. Medical College, Kanpur, as Reader in Orthopaedics and was responsible for establishing the Department of Orthopaedics there. He became Professor and Head of the Department in 1959, a position he held till his retirement in 1976. The course for M.S.Orth. degree was started at Kanpur in 1960 and in the next 15 years till his retirement, 38 M.S. and 36 D.Orth surgeons were trained. Most of his students achieved senior professional and academic positions in India and overseas. Prof. A. K. Gupta had a positive and optimistic attitude, and did not believe in wasting time and complaining about problems. He never appeared rushed and no one ever heard him speak in a harsh voice to anyone around him. He had appropriate facial expressions, body movements and a friendly attitude, which are ingredients of lasting relationship. He was a dedicated teacher, tireless surgeon and a respected leader. Educating orthopaedic residents never took a backseat to anything. Prof. Gupta was a lifelong scholar. He read voraciously and had broad depth of knowledge of orthopaedics as well as of literature and current events. Prof. A. K. Gupta had wide-ranging clinical interests, but the topics very close to his heart were rickets and osteomalacia, paediatric femoral neck fractures, osteotomies around hip, correction of foot deformities and hand and lower limb deformities of poliomyelitis, and Hansen's disease. He played an active role in Indian Orthopaedic Association and was its Secretary from 1963 to 1966 and then held the chair of vice-president in 1967. He was honoured with Presidency of Indian Orthopaedic Association (IOA) in 1975-1976 and was awarded the highest honour of “IOA - Lifetime Achievement Award” at the 51st Annual Conference of Indian Orthopaedic Association in 2006 at Delhi. “A.K. Gupta Trophy” is awarded to the best chapter of IOA, and the best paper presented at UP Chapter of Indian Orthopaedic Association (UPCON), gets “A.K. Gupta Gold Medal”. UPCON - 2008 and the January 2008 issue of Bone and Joint Diseases were dedicated to the memory of Prof. A. K. Gupta. Prof. A. K. Gupta spent a lot of time trying to impart compassion as a surgical skill. He was a very loving man and will be missed dearly not only by his family, but also by his students and all who ever came in contact with him.