Looking into Pandora's Box: The Content of Sci-Hub and its Usage 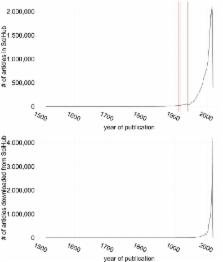 Despite the growth of Open Access, potentially illegally circumventing paywalls to access scholarly publications is becoming a more mainstream phenomenon. The web service Sci-Hub is amongst the biggest facilitators of this, offering free access to around 62 million publications. So far it is not well studied how and why its users are accessing publications through Sci-Hub. By utilizing the recently released corpus of Sci-Hub and comparing it to the data of  ~28 million downloads done through the service, this study tries to address some of these questions. The comparative analysis shows that both the usage and complete corpus is largely made up of recently published articles, with users disproportionately favoring newer articles and 35% of downloaded articles being published after 2013. These results hint that embargo periods before publications become Open Access are frequently circumnavigated using Guerilla Open Access approaches like Sci-Hub. On a journal level, the downloads show a bias towards some scholarly disciplines, especially Chemistry, suggesting increased barriers to access for these. Comparing the use and corpus on a publisher level, it becomes clear that only 11% of publishers are highly requested in comparison to the baseline frequency, while 45% of all publishers are significantly less accessed than expected. Despite this, the oligopoly of publishers is even more remarkable on the level of content consumption, with 80% of all downloads being published through only 9 publishers. All of this suggests that Sci-Hub is used by different populations and for a number of different reasons, and that there is still a lack of access to the published scientific record. A further analysis of these openly available data resources will undoubtedly be valuable for the investigation of academic publishing.

The Oligopoly of Academic Publishers in the Digital Era

Vincent Larivière,  Stefanie Haustein,  Philippe Mongeon (2015)
The consolidation of the scientific publishing industry has been the topic of much debate within and outside the scientific community, especially in relation to major publishers’ high profit margins. However, the share of scientific output published in the journals of these major publishers, as well as its evolution over time and across various disciplines, has not yet been analyzed. This paper provides such analysis, based on 45 million documents indexed in the Web of Science over the period 1973-2013. It shows that in both natural and medical sciences (NMS) and social sciences and humanities (SSH), Reed-Elsevier, Wiley-Blackwell, Springer, and Taylor & Francis increased their share of the published output, especially since the advent of the digital era (mid-1990s). Combined, the top five most prolific publishers account for more than 50% of all papers published in 2013. Disciplines of the social sciences have the highest level of concentration (70% of papers from the top five publishers), while the humanities have remained relatively independent (20% from top five publishers). NMS disciplines are in between, mainly because of the strength of their scientific societies, such as the ACS in chemistry or APS in physics. The paper also examines the migration of journals between small and big publishing houses and explores the effect of publisher change on citation impact. It concludes with a discussion on the economics of scholarly publishing.

The Number of Scholarly Documents on the Public Web

Madian Khabsa,  C. Lee Giles (2014)
The number of scholarly documents available on the web is estimated using capture/recapture methods by studying the coverage of two major academic search engines: Google Scholar and Microsoft Academic Search. Our estimates show that at least 114 million English-language scholarly documents are accessible on the web, of which Google Scholar has nearly 100 million. Of these, we estimate that at least 27 million (24%) are freely available since they do not require a subscription or payment of any kind. In addition, at a finer scale, we also estimate the number of scholarly documents on the web for fifteen fields: Agricultural Science, Arts and Humanities, Biology, Chemistry, Computer Science, Economics and Business, Engineering, Environmental Sciences, Geosciences, Material Science, Mathematics, Medicine, Physics, Social Sciences, and Multidisciplinary, as defined by Microsoft Academic Search. In addition, we show that among these fields the percentage of documents defined as freely available varies significantly, i.e., from 12 to 50%.

The academic, economic and societal impacts of Open Access: an evidence-based review

Competing interests: The author uses SciHub regularly in his own research. Otherwise the author declares no competing financial, personal, or professional interests.

The author(s) declared that no grants were involved in supporting this work.