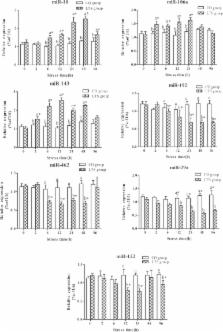 Cold stress has a serious impact on the overwintering survival and yield of genetically improved farmed tilapia (GIFT, Oreochromis niloticus). Understanding the physiological and molecular regulation mechanisms of low-temperature adaptation is necessary to help breed new tolerant strains. The semi-lethal low temperature of juvenile GIFT at 96 h was determined as 9.4 °C. We constructed and sequenced two small RNA libraries from head kidney tissues, one for the control (CO) group and one for the 9.4 °C-stressed (LTS) group, and identified 1736 and 1481 known microRNAs (miRNAs), and 164 and 152 novel miRNAs in the CO and LTS libraries, respectively. We verify the expression of nine up-regulated miRNAs and eight down-regulation miRNAs by qRT-PCR, and found their expression patterns were consistent with the sequencing results. We found that cold stress may have produced dysregulation of free radical and lipid metabolism, decreased superoxide dismutase activity, reduced respiratory burst and phagocytic activity of macrophages, increased malondialdehyde content, and adversely affected the physiological adaptation of GIFT, eventually leading to death. This study revealed interactions among miRNAs and signal regulated pathways in GIFT under cold stress that may help to understand the pathways involved in cold resistance.

Role of microRNAs in vascular diseases, inflammation, and angiogenesis.

Stefanie Dimmeler,  Carmen Urbich,  Angelika Kuehbacher (2008)
The integrity of the endothelial monolayer is fundamental for the homoeostasis of the vascular system. Functional endothelial cells are also required for the growth of new blood vessels during neovascularization. Although multiple growth factors have been shown to regulate angiogenesis and vascular development, little is known about the complex upstream regulation of gene expression and translation. MicroRNAs (miRNAs) are an emerging class of highly conserved, non-coding small RNAs that regulate gene expression on the post-transcriptional level by inhibiting the translation of protein from mRNA or by promoting the degradation of mRNA. More than 500 human miRNAs have been identified so far, and increasing evidence indicates that miRNAs have distinct expression profiles and play crucial roles in various physiological and pathological processes such as cardiogenesis, haematopoietic lineage differentiation, and oncogenesis. Meanwhile, a few specific miRNAs that regulate endothelial cell functions and angiogenesis have been described. Let7-f, miR-27b, and mir-130a were identified as pro-angiogenic miRNAs. In contrast, miR-221 and miR-222 inhibit endothelial cell migration, proliferation, and angiogenesis in vitro by targeting the stem cell factor receptor c-kit and indirectly regulating endothelial nitric oxide synthase expression. Moreover, some miRNAs are involved in tumour angiogenesis such as the miR-17-92 cluster and miR-378. Early studies also indicate the contribution of specific miRNAs (e.g. miR-155, miR-21, and miR-126) to vascular inflammation and diseases. Thus, the identification of miRNAs and their respective targets may offer new therapeutic strategies to treat vascular diseases such as atherosclerosis, to improve neovascularization after ischaemia, or to prevent tumour progression.

Role of Dicer and Drosha for endothelial microRNA expression and angiogenesis.