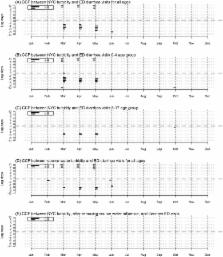 Studies have examined whether there is a relationship between drinking water turbidity and gastrointestinal (GI) illness indicators, and results have varied possibly due to differences in methods and study settings.

As part of a water security improvement project we conducted a retrospective analysis of the relationship between drinking water turbidity and GI illness in New York City (NYC) based on emergency department chief complaint syndromic data that are available in near-real-time.

We used a Poisson time-series model to estimate the relationship of turbidity measured at distribution system and source water sites to diarrhea emergency department (ED) visits in NYC during 2002-2009. The analysis assessed age groups and was stratified by season and adjusted for sub-seasonal temporal trends, year-to-year variation, ambient temperature, day-of-week, and holidays.

Seasonal variation unrelated to turbidity dominated (~90% deviance) the variation of daily diarrhea ED visits, with an additional 0.4% deviance explained with turbidity. Small yet significant multi-day lagged associations were found between NYC turbidity and diarrhea ED visits in the spring only, with approximately 5% excess risk per inter-quartile-range of NYC turbidity peaking at a 6 day lag. This association was strongest among those aged 0-4 years and was explained by the variation in source water turbidity.

Integrated analysis of turbidity and syndromic surveillance data, as part of overall drinking water surveillance, may be useful for enhanced situational awareness of possible risk factors that can contribute to GI illness. Elucidating the causes of turbidity-GI illness associations including seasonal and regional variations would be necessary to further inform surveillance needs.

Richard Heffernan,  Farzad Mostashari,  Debjani Das … (2004)
The New York City Department of Health and Mental Hygiene has established a syndromic surveillance system that monitors emergency department visits to detect disease outbreaks early. Routinely collected chief complaint information is transmitted electronically to the health department daily and analyzed for temporal and spatial aberrations. Respiratory, fever, diarrhea, and vomiting are the key syndromes analyzed. Statistically significant aberrations or "signals" are investigated to determine their public health importance. In the first year of operation (November 15, 2001, to November 14, 2002), 2.5 million visits were reported from 39 participating emergency departments, covering an estimated 75% of annual visits. Most signals for the respiratory and fever syndromes (64% and 95%, respectively) occurred during periods of peak influenza A and B activity. Eighty-three percent of the signals for diarrhea and 88% of the signals for vomiting occurred during periods of suspected norovirus and rotavirus transmission.

Kazuhiko Ito,  Robert Mathes,  Zev Ross … (2010)
Background Recent time-series studies have indicated that both cardiovascular disease (CVD)mortality and hospitalizations are associated with particulate matter (PM). However, seasonal patterns of PM associations with these outcomes are not consistent, and PM components responsible for these associations have not been determined. We investigated this issue in New York City (NYC), where PM originates from regional and local combustion sources. Objective In this study, we examined the role of particulate matter with aerodynamic diameter ≤ 2.5 μm (PM2.5) and its key chemical components on both CVD hospitalizations and on mortality in NYC. Methods We analyzed daily deaths and emergency hospitalizations for CVDs among persons ≥ 40 years of age for associations with PM2.5, its chemical components, nitrogen dioxide (NO2), carbon monoxide, and sulfur dioxide for the years 2000–2006 using a Poisson time-series model adjusting for temporal and seasonal trends, temperature effects, and day of the week. We estimated excess risks per interquartile-range increases at lags 0 through 3 days for warm (April through September) and cold (October through March) seasons. Results The CVD mortality series exhibit strong seasonal trends, whereas the CVD hospitalization series show a strong day-of-week pattern. These outcome series were not correlated with each other but were individually associated with a number of PM2.5 chemical components from regional and local sources, each with different seasonal patterns and lags. Coal-combustion–related components (e.g., selenium) were associated with CVD mortality in summer and CVD hospitalizations in winter, whereas elemental carbon and NO2 showed associations with these outcomes in both seasons. Conclusion Local combustion sources, including traffic and residual oil burning, may play a year-round role in the associations between air pollution and CVD outcomes, but transported aerosols may explain the seasonal variation in associations shown by PM2.5 mass.

F Dangendorf,  M Exner,  V Vacata … (2002)
Hygienic and microbiological examinations of watercourses are usually not carried out during heavy rainfall and runoff events. After rainfall or snowmelt, there are often massive increases in turbidity in flooding creeks in mountain ranges, which are frequently interpreted as an indication of microbial contamination. The aim of this study was to quantify the microbial loads of watercourses during such runoff events and to compare these loads with loads occurring during regular conditions. In a 14-month monitoring period we investigated the microbial loads of three tributaries of different drinking water reservoirs. A total of 99 water samples were taken under different runoff conditions and analyzed to determine physical, chemical, bacterial, and parasitic parameters. Thirty-two water samples were considered event samples during nine measuring series. The criteria for events, based on duration and intensity of precipitation, water depth gauge measurements, and dynamics, had been fixed before the investigation for each creek individually. Of the physical and chemical parameters examined, only the turbidity, pH, and nitrate values differed clearly from the values obtained for regular samples. Most of the bacteriological parameters investigated (colony, Escherichia coli, coliform, fecal streptococcal, and Clostridium perfringens counts) increased considerably during extreme runoff events. If relevant sources of parasitic contamination occurred in catchment areas, the concentrations of Giardia and Cryptosporidium rose significantly during events. The results show that substantial shares of the total microbial loads in watercourses and in drinking water reservoirs result from rainfall and extreme runoff events. Consequently, regular samples are considered inadequate for representing the microbial contamination of watercourse systems. The procedures for raw water surveillance in the context of multiple-barrier protection and risk assessment ought to include sampling during extreme runoff situations.

This work was supported by the Environmental Protection Agency Water Security Initiative grant #H1-83380501 ( http://water.epa.gov/infrastructure/watersecurity/lawsregs/initiative.cfm). The EPA approved funding for the NYC Water Security Initiative, including funds to conduct a study of water quality and health outcomes. The funders had no role in study design, data collection and analysis, decision to publish, or preparation of the manuscript.

Data Availability NYC Syndromic Surveillance data is available through the NYC EpiQuery database which can be accessed at: https://a816-healthpsi.nyc.gov/epiquery/Syndromic/index.html. Water quality data were collected by the NYC Department of Environmental Protection: http://www.nyc.gov/html/dep/html/drinking_water/wsstate.shtml. For additional information contact the DEP at: http://www.nyc.gov/html/dep/html/contact_us/index.shtml.
Data availability:
ScienceOpen disciplines: Uncategorized