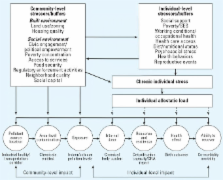 Research indicates that the double jeopardy of exposure to environmental hazards combined with place-based stressors is associated with maternal and child health (MCH) disparities.

Our aim is to present evidence that individual-level and place-based psychosocial stressors may compromise host resistance such that environmental pollutants would have adverse health effects at relatively lower doses, thus partially explaining MCH disparities, particularly poor birth outcomes. Allostatic load may be a physiologic mechanism behind the moderation of the toxic effect of environmental pollutants by social stressors. We propose a conceptual framework for holistic approaches to future MCH research that elucidates the interplay of psychosocial stressors and environmental hazards in order to better explain drivers of MCH disparities.

Given the complexity of the link between environmental factors and MCH disparities, a holistic approach to future MCH research that seeks to untangle the double jeopardy of chronic stressors and environmental hazard exposures could help elucidate how the interplay of these factors shapes persistent racial and economic disparities in MCH.

Bringing context back into epidemiology: variables and fallacies in multilevel analysis.

A Diez-Roux (1998)
A large portion of current epidemiologic research is based on methodologic individualism: the notion that the distribution of health and disease in populations can be explained exclusively in terms of the characteristics of individuals. The present paper discusses the need to include group- or macro-level variables in epidemiologic studies, thus incorporating multiple levels of determination in the study of health outcomes. These types of analyses, which have been called contextual or multi-level analyses, challenge epidemiologists to develop theoretical models of disease causation that extend across levels and explain how group-level and individual-level variables interact in shaping health and disease. They also raise a series of methodological issues, including the need to select the appropriate contextual unit and contextual variables, to correctly specify the individual-level model, and, in some cases, to account for residual correlation between individuals within contexts. Despite its complexities, multilevel analysis holds potential for reemphasizing the role of macro-level variables in shaping health and disease in populations.

Gilbert Gee, Devon C. Payne-Sturges (2004)
Although it is often acknowledged that social and environmental factors interact to produce racial and ethnic environmental health disparities, it is still unclear how this occurs. Despite continued controversy, the environmental justice movement has provided some insight by suggesting that disadvantaged communities face greater likelihood of exposure to ambient hazards. The exposure–disease paradigm has long suggested that differential “vulnerability” may modify the effects of toxicants on biological systems. However, relatively little work has been done to specify whether racial and ethnic minorities may have greater vulnerability than do majority populations and, further, what these vulnerabilities may be. We suggest that psychosocial stress may be the vulnerability factor that links social conditions with environmental hazards. Psychosocial stress can lead to acute and chronic changes in the functioning of body systems (e.g., immune) and also lead directly to illness. In this article we present a multidisciplinary framework integrating these ideas. We also argue that residential segregation leads to differential experiences of community stress, exposure to pollutants, and access to community resources. When not counterbalanced by resources, stressors may lead to heightened vulnerability to environmental hazards.

Effects of transplacental exposure to environmental pollutants on birth outcomes in a multiethnic population.

Frederica Perera, Virginia Rauh, Wei-Yann Tsai … (2003)
Inner-city, minority populations are high-risk groups for adverse birth outcomes and also are more likely to be exposed to environmental contaminants, including environmental tobacco smoke (ETS), polycyclic aromatic hydrocarbons (PAHs), and pesticides. In a sample of 263 nonsmoking African-American and Dominican women, we evaluated the effects on birth outcomes of prenatal exposure to airborne PAHs monitored during pregnancy by personal air sampling, along with ETS estimated by plasma cotinine, and an organophosphate pesticide (OP) estimated by plasma chlorpyrifos (CPF). Plasma CPF was used as a covariate because it was the most often detected in plasma and was highly correlated with other pesticides frequently detected in plasma. Among African Americans, high prenatal exposure to PAHs was associated with lower birth weight (p = 0.003) and smaller head circumference (p = 0.01) after adjusting for potential confounders. CPF was associated with decreased birth weight and birth length overall (p = 0.01 and p = 0.003, respectively) and with lower birth weight among African Americans (p = 0.04) and reduced birth length in Dominicans (p < 0.001), and was therefore included as a covariate in the model with PAH. After controlling for CPF, relationships between PAHs and birth outcomes were essentially unchanged. In this analysis, PAHs and CPF appear to be significant independent determinants of birth outcomes. Further analyses of pesticides will be carried out. Possible explanations of the failure to find a significant effect of PAHs in the Hispanic subsample are discussed. This study provides evidence that environmental pollutants at levels currently encountered in New York City adversely affect fetal development.