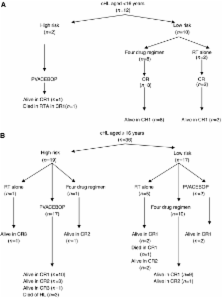 The aim was to assess outcome in a population-based cohort of adolescents with Hodgkin's lymphoma (HL) diagnosed in the UK's northern region over a 10-year period. Among a population of 3.09 million, 55 of 676 patients (8%) diagnosed with HL were aged 13–19. Seven had nodular lymphocyte-predominant HL, 48 classical HL (cHL). Of the latter, 36 were ⩾16 years. Application of the Scottish and Newcastle Lymphoma Group (SNLG) prognostic index meant 21 patients were considered high risk (index ⩾0.5). They received PVACEBOP multi-agent chemotherapy as primary therapy. Standard risk patients (SNLG index <0.5) were treated with standard ChlVPP or ABVD chemotherapy±radiotherapy. Scottish and Newcastle Lymphoma Group indexing is not valid for patients under 16. Twelve patients therefore received UKCCSG protocols ( n=8), ABVD plus radiotherapy ( n=2), or PVACEBOP ( n=2). Forty-six patients with cHL (96%) achieved complete remission. Seven patients relapsed but all entered complete remission after salvage therapy. Five patients died: three of HL, one in an accident and one of disseminated varicella complicating cystic fibrosis. Five- and 10-year overall survival was 93 and 86%, respectively; disease-specific survival was 95 and 92%. The data suggest that older adolescents with high-risk HL require intensive protocols as primary therapy to secure optimal outcome.

Thomas Bloomfield,  J Diebold,  Reid N. Harris … (1999)
Since 1995, the European Association of Pathologists (EAHP) and the Society for Hematopathology (SH) have been developing a new World Health Organization (WHO) classification of haematological malignancies. The classification includes lymphoid, myeloid, histiocytic and mast cell neoplasms. The WHO project involves 10 committees of pathologists, who have developed lists and definitions of disease entities. A Clinical Advisory Committee (CAC) of international haematologists and oncologists was formed to ensure that the classification will be useful to clinicians. A meeting was held in November 1997 to discuss clinical issues related to the classification. The WHO has adopted the 'Revised European-American Classification of Lymphoid Neoplasms' (REAL), published in 1994 by the International Lymphoma Study Group (ILSG), as the classification of lymphoid neoplasms. This approach to classification is based on the principle that a classification is a list of 'real' disease entities, which are defined by a combination of morphology, immunophenotype, genetic features and clinical features. The relative importance of each of these features varies among diseases, and there is no one 'gold standard'. The WHO classification has applied the principles of the REAL classification to myeloid and histiocytic neoplasms. The classification of myeloid neoplasms recognizes distinct entities defined by a combination of morphology and cytogenetic abnormalities. The CAC meeting, which was organized around a series of clinical questions, was able to reach a consensus on most of the questions posed. The questions and the consensus are discussed in detail below. Among other things, the CAC concluded that clinical groupings of lymphoid neoplasms was neither necessary nor desirable. Patient treatment is determined by the specific type of lymphoma, with the addition of grade within the tumour type, if applicable, and clinical prognostic factors such as the international prognostic index (IPI). The experience of developing the WHO classification has produced a new and exciting degree of cooperation and communication between oncologists and pathologists from around the world, which should facilitate progress in the understanding and treatment of haematological malignancies.

Randomized comparison of low-dose involved-field radiotherapy and no radiotherapy for children with Hodgkin's disease who achieve a complete response to chemotherapy.

John Hutchinson,  G Gilchrist,  Richard Sposto … (2002)
Current standard therapy for children and adolescents with Hodgkin's disease includes combination chemotherapy and low-dose involved-field radiation (LD-IFRT). Because radiation may be associated with adverse late effects, the Children's Cancer Group (CCG) investigated whether radiation could be omitted in patients achieving a complete response to initial chemotherapy without jeopardizing the excellent outcome obtained with combined-modality therapy. Between January 1995 and December 1998, 829 eligible patients were enrolled onto CCG 5942. A total of 501 patients who achieved an initial complete response after risk-adapted combination chemotherapy were randomized to receive LD-IFRT or no further treatment. Event-free survival (EFS) and overall survival were assessed from the date of study entry or the date of randomization, as appropriate. The projected 3-year EFS from study entry for the entire cohort was 87% +/- 1.2%. Among patients who achieved a complete response to initial chemotherapy, 92% +/- 1.9% of those randomized to receive LD-IFRT were alive and disease free 3 years after randomization, versus 87% +/- 2.2% for patients randomized to receive no further therapy (stratified log-rank test; P =.057). With an "as-treated" analysis, 3-year EFS after randomization for the radiation cohort was 93% +/- 1.7% versus 85% +/- 2.3% for patients receiving no further therapy (stratified log-rank test; P =.0024). Three-year survival estimates for patients treated with and without LD-IFRT were 98% +/- 1.1% for patients who received radiation and 99% +/- 0.5% for patients who did not receive radiation. LD-IFRT after an initial complete response to risk-adapted chemotherapy improved EFS. At this time, there is no survival advantage for LD-IFRT, but follow-up remains short.