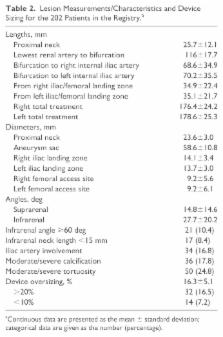 To evaluate the safety and performance of the Treovance stent-graft.

The RATIONALE registry showed favorable safety and clinical performance of the Treovance stent-graft for the treatment of infrarenal AAAs in a real-world setting.

R M Greenhalgh,  L Brown,  G Kwong … (2015)
Endovascular aneurysm repair (EVAR) is a new technology to treat patients with abdominal aortic aneurysm (AAA) when the anatomy is suitable. Uncertainty exists about how endovascular repair compares with conventional open surgery. EVAR trial 1 was instigated to compare these treatments in patients judged fit for open AAA repair. Between 1999 and 2003, 1082 elective (non-emergency) patients were randomised to receive either EVAR (n=543) or open AAA repair (n=539). Patients aged at least 60 years with aneurysms of diameter 5.5 cm or more, who were fit enough for open surgical repair (anaesthetically and medically well enough for the procedure), were recruited for the study at 41 British hospitals proficient in the EVAR technique. The primary outcome measure is all-cause mortality and these results will be released in 2005. The primary analysis presented here is operative mortality by intention to treat and a secondary analysis was done in per-protocol patients. Patients (983 men, 99 women) had a mean age of 74 years (SD 6) and mean AAA diameter of 6.5 cm (SD 1). 1047 (97%) patients underwent AAA repair and 1008 (93%) received their allocated treatment. 30-day mortality in the EVAR group was 1.7% (9/531) versus 4.7% (24/516) in the open repair group (odds ratio 0.35 [95% CI 0.16-0.77], p=0.009). By per-protocol analysis, 30-day mortality for EVAR was 1.6% (8/512) versus 4.6% (23/496) for open repair (0.33 [0.15-0.74], p=0.007). Secondary interventions were more common in patients allocated EVAR (9.8% vs 5.8%, p=0.02). In patients with large AAAs, treatment by EVAR reduced the 30-day operative mortality by two-thirds compared with open repair. Any change in clinical practice should await durability and longer term results.

F Padberg,  Panagiotis Kougias,  Jon Matsumura … (2012)
Whether elective endovascular repair of abdominal aortic aneurysm reduces long-term morbidity and mortality, as compared with traditional open repair, remains uncertain. We randomly assigned 881 patients with asymptomatic abdominal aortic aneurysms who were candidates for both procedures to either endovascular repair (444) or open repair (437) and followed them for up to 9 years (mean, 5.2). Patients were selected from 42 Veterans Affairs medical centers and were 49 years of age or older at the time of registration. More than 95% of the patients underwent the assigned repair. For the primary outcome of all-cause mortality, 146 deaths occurred in each group (hazard ratio with endovascular repair versus open repair, 0.97; 95% confidence interval [CI], 0.77 to 1.22; P=0.81). The previously reported reduction in perioperative mortality with endovascular repair was sustained at 2 years (hazard ratio, 0.63; 95% CI, 0.40 to 0.98; P=0.04) and at 3 years (hazard ratio, 0.72; 95% CI, 0.51 to 1.00; P=0.05) but not thereafter. There were 10 aneurysm-related deaths in the endovascular-repair group (2.3%) versus 16 in the open-repair group (3.7%) (P=0.22). Six aneurysm ruptures were confirmed in the endovascular-repair group versus none in the open-repair group (P=0.03). A significant interaction was observed between age and type of treatment (P=0.006); survival was increased among patients under 70 years of age in the endovascular-repair group but tended to be better among those 70 years of age or older in the open-repair group. Endovascular repair and open repair resulted in similar long-term survival. The perioperative survival advantage with endovascular repair was sustained for several years, but rupture after repair remained a concern. Endovascular repair led to increased long-term survival among younger patients but not among older patients, for whom a greater benefit from the endovascular approach had been expected. (Funded by the Department of Veterans Affairs Office of Research and Development; OVER ClinicalTrials.gov number, NCT00094575.).