Association between Helicobacter pylori and end-stage renal disease: A meta-analysis 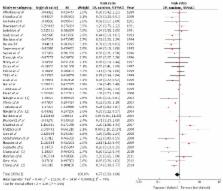 To investigate the prevalence and association of Helicobacter pylori ( H. pylori) with end-stage renal disease (ESRD).

SA comprehensive literature search was completed from inception until October 2016. Studies that reported prevalence, relative risks, odd ratios, hazard ratios or standardized incidence ratio of H. pylori among ESRD patients were included. Participants without H. pylori were used as comparators to assess the association between H. pylori infection and ESRD. Pooled risk ratios and 95%CI was calculated using a random-effect model. Adjusted point estimates from each study were combined by the generic inverse variance method of DerSimonian and Laird.

T Kodama,  Yoshio Yamaoka,  Shogo Kikuchi … (2002)
Although epidemiological studies suggest that interleukin (IL)-1 genetic polymorphisms are involved in Helicobacter pylori-related gastric carcinogenesis, the data are conflicting regarding the effects of these polymorphisms on IL-1beta production. IL-1B-511 polymorphism was genotyped by polymerase chain reaction (PCR)-restriction fragment length polymorphism, and IL-1RN variable number of tandem repeats was determined by PCR. Mucosal IL-1beta levels were measured by enzyme-linked immunosorbent assay. To determine which factors influence mucosal IL-1beta levels, gastric inflammation, and atrophy, multiple regression analyses were performed. We studied 117 H. pylori-infected Japanese patients. Carriers of the IL-1B-511T/T genotype or IL-1RN*2 allele had higher mucosal IL-1beta levels than noncarriers (partial regression coefficient [PRC] +/- SE), TT versus CC: 37.6 +/- 6 [antrum] and 32.1 +/- 6 [corpus] pg/mg protein (P < 0.001 for each), *1/*2 versus *1/*1: 24 +/- 8 [antrum] (P <0.01) and 36.5 +/- 7 [corpus] (P <0.001). Simultaneous carriers of IL-1B-511T/T genotype and IL-1RN*2 allele had the highest IL-1beta levels (82.9 +/- 12 [antrum] and 87.2 +/- 11 [corpus]) and showed a synergistic effect between 2 loci. The *1/*2 carriers were closely related to atrophy (PRC +/- SE; 0.87 +/- 0.4 [antrum] and 0.93 +/- 0.4 [corpus], P < 0.05), whereas being a carrier of the -511T/T genotype was related to severe gastric inflammation. IL-1 genetic polymorphisms influenced H. pylori-related gastric mucosal IL-1beta levels and were related to gastric inflammation and atrophy, factors thought to be important in gastric carcinogenesis.

Transmission and epidemiology of Helicobacter pylori.

Kyle Cave (1996)
Helicobacter pylori is one of the most common bacterial infections worldwide. However, the majority of those infected do not develop clinical manifestations of disease. This review discusses the epidemiology of the organism in terms of incidence and prevalence, the presumed means of transmission from person to person, and how typing of the organism has helped the epidemiologist. The epidemiology of disorders that are associated with H. pylori is also discussed.

H Khedmat,  M Amini,  M. Lessan-Pezeshki … (2007)
Upper gastrointestinal (UGI) symptoms are common in uremic patients, and higher serum levels of urea have been suggested to be related to Helicobacter pylori (HP) colonization and UGI mucosal inflammation. The aim of this study was to compare HP infection and UGI endoscopic findings between uremic patients, renal transplant (RT) recipients, and controls. A total of 474 subjects (71 chronic renal failure [CRF], 73 hemodialysis [HD], 25 Tx, and 305 controls) from Baqyiatallah Hospital, Tehran, Iran were recruited between April 2002 and March 2004 for evaluation of dyspepsia, excluding those receiving any HP-eradication therapy. All subjects were examined for esophagus, stomach and duodenum mucosa, and infection with HP on 2 distinct tissue samples of the anthral region. Four groups of subjects (mean +/- 2 se; age, 45 +/- 1.6 years; 62.9% male) were studied. Duodenal ulcer in the uremic patients (CRF, 16.1%; HD, 13.7%) was more common than that in the RT-recipients (8%) and controls (6.5%); P=.038. Erosive gastritis and duodenal bulb deformity were also more common in the uremic subjects (CRF, 23.9%, 36.9%; HD, 30.1%, 20.5%, respectively) than those in the other subjects (RT recipients, 16%, 8%; controls, 8.2%; 0%, respectively); P<.001. HP infection was found to be higher in the uremic patients (CRF, 66.2%; HD, 63%) than in the RT recipients (40%) and controls (34.8%); P<.001. Higher rates of gastric and duodenal mucosal lesions and HP infection in the uremic patients in comparison with the subjects with normal renal function may have resulted from higher serum levels of urea, anemia, and fluctuations in the gastric blood supply in the CRF and HD patients. However, more tenable evidence from controlled trials is required for the eradication of HP in all uremic patients and transplantation candidates.