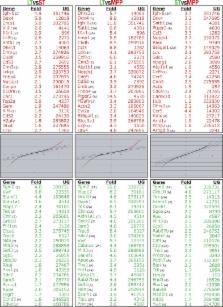 The hematopoietic system is an invaluable model both for understanding basic developmental biology and for developing clinically relevant cell therapies. Using highly purified cells and rigorous microarray analysis we have compared the expression pattern of three of the most primitive hematopoietic subpopulations in adult mouse bone marrow: long-term hematopoietic stem cells (HSC), short-term HSC, and multipotent progenitors. All three populations are capable of differentiating into a spectrum of mature blood cells, but differ in their self-renewal and proliferative capacity. We identified numerous novel potential regulators of HSC self-renewal and proliferation that were differentially expressed between these closely related cell populations. Many of the differentially expressed transcripts fit into pathways and protein complexes not previously identified in HSC, providing evidence for new HSC regulatory units. Extending these observations to the protein level, we demonstrate expression of several of the corresponding proteins, which provide novel surface markers for HSC. We discuss the implications of our findings for HSC biology. In particular, our data suggest that cell–cell and cell–matrix interactions are major regulators of long-term HSC, and that HSC themselves play important roles in regulating their immediate microenvironment.

Hematopoietic, or blood-forming, stem cells (HSC) are responsible for the continual replenishment of all blood cells throughout life. This ability to both renew themselves and give rise to expanded populations of differentiating and mature cells is a hallmark of stem cells and is therefore an area of intense research. The rarity of HSC as well as their location in the bone marrow environment has made it difficult to identify the genes that regulate these properties. The earliest stages of blood development begins with the long-term (LT) repopulating HSC that then differentiate into short-term (ST) repopulating HSC and non-self renewing multipotent progenitors (MPP). The authors investigated the gene expression differences in these highly purified populations that differ mainly in their capacity to self renew, and identified a number of genes specific to each of these populations. Intriguingly, many of these genes code for proteins that are involved in cell–cell and cell–matrix interactions that were not previously identified on these populations. These novel discoveries will, together with future experiments, enhance our understanding of the basic biology of stem cells and their clinical uses.

I Weissman,  Nigel Clarke,  T Reya … (2001)
Stem cell biology has come of age. Unequivocal proof that stem cells exist in the haematopoietic system has given way to the prospective isolation of several tissue-specific stem and progenitor cells, the initial delineation of their properties and expressed genetic programmes, and the beginnings of their utility in regenerative medicine. Perhaps the most important and useful property of stem cells is that of self-renewal. Through this property, striking parallels can be found between stem cells and cancer cells: tumours may often originate from the transformation of normal stem cells, similar signalling pathways may regulate self-renewal in stem cells and cancer cells, and cancer cells may include 'cancer stem cells' - rare cells with indefinite potential for self-renewal that drive tumorigenesis.

Significance analysis of microarrays applied to the ionizing radiation response.

V Tusher,  R Tibshirani,  G Chu (2001)
Microarrays can measure the expression of thousands of genes to identify changes in expression between different biological states. Methods are needed to determine the significance of these changes while accounting for the enormous number of genes. We describe a method, Significance Analysis of Microarrays (SAM), that assigns a score to each gene on the basis of change in gene expression relative to the standard deviation of repeated measurements. For genes with scores greater than an adjustable threshold, SAM uses permutations of the repeated measurements to estimate the percentage of genes identified by chance, the false discovery rate (FDR). When the transcriptional response of human cells to ionizing radiation was measured by microarrays, SAM identified 34 genes that changed at least 1.5-fold with an estimated FDR of 12%, compared with FDRs of 60 and 84% by using conventional methods of analysis. Of the 34 genes, 19 were involved in cell cycle regulation and 3 in apoptosis. Surprisingly, four nucleotide excision repair genes were induced, suggesting that this repair pathway for UV-damaged DNA might play a previously unrecognized role in repairing DNA damaged by ionizing radiation.

*To whom correspondence should be addressed. E-mail: cforsber@123456stanford.edu