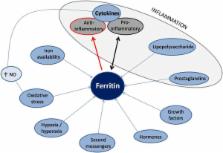 Over the last few years, accumulating data have implicated a role for ferritin as a signaling molecule and direct mediator of the immune system. Hyperferritinemia is associated with a multitude of clinical conditions and with worse prognosis in critically ill patients.

There are four uncommon medical conditions characterized by high levels of ferritin, namely the macrophage activation syndrome (MAS), adult onset Still’s disease (AOSD), catastrophic antiphospholipid syndrome (cAPS) and septic shock, that share a similar clinical and laboratory features, and also respond to similar treatments, suggesting a common pathogenic mechanism. Ferritin is known to be a pro-inflammatory mediator inducing expression of pro-inflammatory molecules, yet it has opposing actions as a pro-inflammatory and as an immunosuppressant. We propose that the exceptionally high ferritin levels observed in these uncommon clinical conditions are not just the product of the inflammation but rather may contribute to the development of a cytokine storm.

Here we review and compare four clinical conditions and the role of ferritin as an immunomodulator. We would like to propose including these four conditions under a common syndrome entity termed “Hyperferritinemic Syndrome”.

Serum ferritin: Past, present and future.

Yan-Wei Wang,  Katy Coffman,  Suzy Torti … (2010)
Serum ferritin was discovered in the 1930s, and was developed as a clinical test in the 1970s. Many diseases are associated with iron overload or iron deficiency. Serum ferritin is widely used in diagnosing and monitoring these diseases. In this chapter, we discuss the role of serum ferritin in physiological and pathological processes and its use as a clinical tool. Although many aspects of the fundamental biology of serum ferritin remain surprisingly unclear, a growing number of roles have been attributed to extracellular ferritin, including newly described roles in iron delivery, angiogenesis, inflammation, immunity, signaling and cancer. Serum ferritin remains a clinically useful tool. Further studies on the biology of this protein may provide new biological insights. Copyright 2010 Elsevier B.V. All rights reserved.

P. Harrison,  P Arosio (1996)
The iron storage protein, ferritin, plays a key role in iron metabolism. Its ability to sequester the element gives ferritin the dual functions of iron detoxification and iron reserve. The importance of these functions is emphasised by ferritin's ubiquitous distribution among living species. Ferritin's three-dimensional structure is highly conserved. All ferritins have 24 protein subunits arranged in 432 symmetry to give a hollow shell with an 80 A diameter cavity capable of storing up to 4500 Fe(III) atoms as an inorganic complex. Subunits are folded as 4-helix bundles each having a fifth short helix at roughly 60 degrees to the bundle axis. Structural features of ferritins from humans, horse, bullfrog and bacteria are described: all have essentially the same architecture in spite of large variations in primary structure (amino acid sequence identities can be as low as 14%) and the presence in some bacterial ferritins of haem groups. Ferritin molecules isolated from vertebrates are composed of two types of subunit (H and L), whereas those from plants and bacteria contain only H-type chains, where 'H-type' is associated with the presence of centres catalysing the oxidation of two Fe(II) atoms. The similarity between the dinuclear iron centres of ferritin H-chains and those of ribonucleotide reductase and other proteins suggests a possible wider evolutionary linkage. A great deal of research effort is now concentrated on two aspects of ferritin: its functional mechanisms and its regulation. These form the major part of the review. Steps in iron storage within ferritin molecules consist of Fe(II) oxidation, Fe(III) migration and the nucleation and growth of the iron core mineral. H-chains are important for Fe(II) oxidation and L-chains assist in core formation. Iron mobilisation, relevant to ferritin's role as iron reserve, is also discussed. Translational regulation of mammalian ferritin synthesis in response to iron and the apparent links between iron and citrate metabolism through a single molecule with dual function are described. The molecule, when binding a [4Fe-4S] cluster, is a functioning (cytoplasmic) aconitase. When cellular iron is low, loss of the [4Fe-4S] cluster allows the molecule to bind to the 5'-untranslated region (5'-UTR) of the ferritin m-RNA and thus to repress translation. In this form it is known as the iron regulatory protein (IRP) and the stem-loop RNA structure to which it binds is the iron regulatory element (IRE). IREs are found in the 3'-UTR of the transferrin receptor and in the 5'-UTR of erythroid aminolaevulinic acid synthase, enabling tight co-ordination between cellular iron uptake and the synthesis of ferritin and haem. Degradation of ferritin could potentially lead to an increase in toxicity due to uncontrolled release of iron. Degradation within membrane-encapsulated "secondary lysosomes' may avoid this problem and this seems to be the origin of another form of storage iron known as haemosiderin. However, in certain pathological states, massive deposits of "haemosiderin' are found which do not arise directly from ferritin breakdown. Understanding the numerous inter-relationships between the various intracellular iron complexes presents a major challenge.

This is an Open Access article distributed under the terms of the Creative Commons Attribution License (http://creativecommons.org/licenses/by/2.0), which permits unrestricted use, distribution, and reproduction in any medium, provided the original work is properly cited.