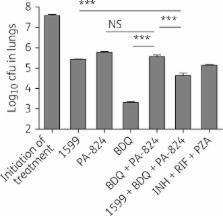 Objectives: New drug regimens employing combinations of existing and experimental antimicrobial agents are needed to shorten treatment of tuberculosis (TB) in humans. The spectinamides are narrow-spectrum semisynthetic analogues of spectinomycin, modified to avoid intrinsic efflux by Mycobacterium tuberculosis. Spectinamides, including lead 1599, have been previously shown to exhibit a promising therapeutic profile in mice as single agents. Here we explore the in vivo activity of lead spectinamides when combined with other agents.

Methods: The efficacy of 1599 or 1810 was tested in combination in three increasingly advanced TB mouse models. Mice were infected by aerosol and allowed to establish acute or chronic infection, followed by treatment (≤4 weeks) with the spectinamides alone or in two- and three-drug combination regimens with existing and novel therapeutic agents. Bacteria were enumerated from lungs by plating for cfu.

Conclusions: Spectinamides were effective partner agents for multiple anti-TB agents including bedaquiline, rifampicin and pyrazinamide. None of these in vivo synergistic interactions was predicted from in vitro MIC chequerboard assays. These data support further development of the spectinamides as combination partners with existing and experimental anti-TB agents.

A diarylquinoline drug active on the ATP synthase of Mycobacterium tuberculosis.

Jerome Guillemont,  Nacer Lounis,  Chantal Truffot … (2005)
The incidence of tuberculosis has been increasing substantially on a worldwide basis over the past decade, but no tuberculosis-specific drugs have been discovered in 40 years. We identified a diarylquinoline, R207910, that potently inhibits both drug-sensitive and drug-resistant Mycobacterium tuberculosis in vitro (minimum inhibitory concentration 0.06 mug/ml). In mice, R207910 exceeded the bactericidal activities of isoniazid and rifampin by at least 1 log unit. Substitution of drugs included in the World Health Organization's first-line tuberculosis treatment regimen (rifampin, isoniazid, and pyrazinamide) with R207910 accelerated bactericidal activity, leading to complete culture conversion after 2 months of treatment in some combinations. A single dose of R207910 inhibited mycobacterial growth for 1 week. Plasma levels associated with efficacy in mice were well tolerated in healthy human volunteers. Mutants selected in vitro suggest that the drug targets the proton pump of adenosine triphosphate (ATP) synthase.

Timothy D. McHugh,  P. W. Phillips,  Stephen H. Gillespie … (2014)
Early-phase and preclinical studies suggest that moxifloxacin-containing regimens could allow for effective 4-month treatment of uncomplicated, smear-positive pulmonary tuberculosis. We conducted a randomized, double-blind, placebo-controlled, phase 3 trial to test the noninferiority of two moxifloxacin-containing regimens as compared with a control regimen. One group of patients received isoniazid, rifampin, pyrazinamide, and ethambutol for 8 weeks, followed by 18 weeks of isoniazid and rifampin (control group). In the second group, we replaced ethambutol with moxifloxacin for 17 weeks, followed by 9 weeks of placebo (isoniazid group), and in the third group, we replaced isoniazid with moxifloxacin for 17 weeks, followed by 9 weeks of placebo (ethambutol group). The primary end point was treatment failure or relapse within 18 months after randomization. Of the 1931 patients who underwent randomization, in the per-protocol analysis, a favorable outcome was reported in fewer patients in the isoniazid group (85%) and the ethambutol group (80%) than in the control group (92%), for a difference favoring the control group of 6.1 percentage points (97.5% confidence interval [CI], 1.7 to 10.5) versus the isoniazid group and 11.4 percentage points (97.5% CI, 6.7 to 16.1) versus the ethambutol group. Results were consistent in the modified intention-to-treat analysis and all sensitivity analyses. The hazard ratios for the time to culture negativity in both solid and liquid mediums for the isoniazid and ethambutol groups, as compared with the control group, ranged from 1.17 to 1.25, indicating a shorter duration, with the lower bounds of the 95% confidence intervals exceeding 1.00 in all cases. There was no significant difference in the incidence of grade 3 or 4 adverse events, with events reported in 127 patients (19%) in the isoniazid group, 111 (17%) in the ethambutol group, and 123 (19%) in the control group. The two moxifloxacin-containing regimens produced a more rapid initial decline in bacterial load, as compared with the control group. However, noninferiority for these regimens was not shown, which indicates that shortening treatment to 4 months was not effective in this setting. (Funded by the Global Alliance for TB Drug Development and others; REMoxTB ClinicalTrials.gov number, NCT00864383.).

Advances in the development of new tuberculosis drugs and treatment regimens.

Stewart T. Cole,  Payam Nahid,  Alimuddin Zumla (2013)
Despite the introduction 40 years ago of the inexpensive and effective four-drug (isoniazid, rifampicin, pyrazinamide and ethambutol) treatment regimen, tuberculosis (TB) continues to cause considerable morbidity and mortality worldwide. For the first time since the 1960s, new and novel drugs and regimens for all forms of TB are emerging. Such regimens are likely to utilize both repurposed drugs and new chemical entities, and several of these regimens are now progressing through clinical trials. This article covers current concepts and recent advances in TB drug discovery and development, including an update of ongoing TB treatment trials, newer clinical trial designs, TB biomarkers and adjunct host-directed therapies.

This is an Open Access article distributed under the terms of the Creative Commons Attribution License ( http://creativecommons.org/licenses/by/4.0/), which permits unrestricted reuse, distribution, and reproduction in any medium, provided the original work is properly cited. 770