A Model of Binocular Rivalry and Cross-orientation Suppression 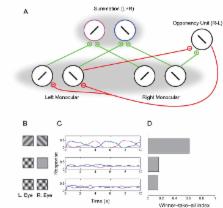 Binocular rivalry and cross-orientation suppression are well-studied forms of competition in visual cortex, but models of these two types of competition are in tension with one another. Binocular rivalry occurs during the presentation of dichoptic grating stimuli, where two orthogonal gratings presented separately to the two eyes evoke strong alternations in perceptual dominance. Cross-orientation suppression occurs during the presentation of plaid stimuli, where the responses to a component grating presented to both eyes is weakened by the presence of a superimposed orthogonal grating. Conventional models of rivalry that rely on strong competition between orientation-selective neurons incorrectly predict rivalry between the components of plaids. Lowering the inhibitory weights in such models reduces rivalry for plaids, but also reduces it for dichoptic gratings. Using an exhaustive grid search, we show that this problem cannot be solved simply by adjusting the parameters of the model. Instead, we propose a robust class of models that rely on ocular opponency neurons, previously proposed as a mechanism for efficient stereo coding, to yield rivalry only for dichoptic gratings, not for plaids. This class of models reconciles models of binocular rivalry with the divisive normalization framework that has been used to explain cross-orientation. Our model makes novel predictions that we confirmed with psychophysical tests.

Binocular rivalry is a visual illusion that occurs when the two eyes are presented with incompatible images. Instead of perceiving a mixture of the two images, most people tend to experiences alternations in which they only see one image at a time. Binocular rivalry is more than just an interesting illusion: it reflects actual competition between neurons in the brain, and therefore provides a rare window into neural dynamics. To help us understand these mechanisms, researchers have developed several computational models of binocular rivalry. Yet surprisingly, as we show in this paper, previous computational models of rivalry make an incorrect prediction. They predict that certain types of images (similar to checkerboards) will cause strong perceptual alternations even when viewed normally. Since this prediction doesn't hold up, the existing models must not be telling the whole story. In this paper, we develop a new model of binocular rivalry that doesn't make this prediction. The model also makes novel predictions – not made by conventional models – that stand up to experimental test. Our model thus provides a better account of how neurons in the visual system interact with one another.

Normalization as a canonical neural computation.

Matteo Carandini,  David J. Heeger (2011)
There is increasing evidence that the brain relies on a set of canonical neural computations, repeating them across brain regions and modalities to apply similar operations to different problems. A promising candidate for such a computation is normalization, in which the responses of neurons are divided by a common factor that typically includes the summed activity of a pool of neurons. Normalization was developed to explain responses in the primary visual cortex and is now thought to operate throughout the visual system, and in many other sensory modalities and brain regions. Normalization may underlie operations such as the representation of odours, the modulatory effects of visual attention, the encoding of value and the integration of multisensory information. Its presence in such a diversity of neural systems in multiple species, from invertebrates to mammals, suggests that it serves as a canonical neural computation.

D Heeger (1992)
Simple cells in the striate cortex have been depicted as half-wave-rectified linear operators. Complex cells have been depicted as energy mechanisms, constructed from the squared sum of the outputs of quadrature pairs of linear operators. However, the linear/energy model falls short of a complete explanation of striate cell responses. In this paper, a modified version of the linear/energy model is presented in which striate cells mutually inhibit one another, effectively normalizing their responses with respect to stimulus contrast. This paper reviews experimental measurements of striate cell responses, and shows that the new model explains a significantly larger body of physiological data.

The normalization model of attention.

Thomas Reynolds,  David J. Heeger (2009)
Attention has been found to have a wide variety of effects on the responses of neurons in visual cortex. We describe a model of attention that exhibits each of these different forms of attentional modulation, depending on the stimulus conditions and the spread (or selectivity) of the attention field in the model. The model helps reconcile proposals that have been taken to represent alternative theories of attention. We argue that the variety and complexity of the results reported in the literature emerge from the variety of empirical protocols that were used, such that the results observed in any one experiment depended on the stimulus conditions and the subject's attentional strategy, a notion that we define precisely in terms of the attention field in the model, but that has not typically been completely under experimental control.