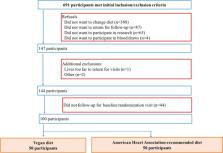 The open‐label, blinded end‐point, EVADE CAD (Effects of a Vegan Versus the American Heart Association‐Recommended Diet in Coronary Artery Disease) trial randomized participants (n=100) with coronary artery disease to 8 weeks of a vegan or American Heart Association–recommended diet with provision of groceries, tools to measure dietary intake, and dietary counseling. The primary end point was high‐sensitivity C‐reactive protein. A linear regression model compared end points after 8 weeks of a vegan versus American Heart Association diet and adjusted for baseline concentration of the end point. Significance levels for the primary and secondary end points were set at 0.05 and 0.0015, respectively. A vegan diet resulted in a significant 32% lower high‐sensitivity C‐reactive protein (β, 0.68, 95% confidence interval [0.49–0.94]; P=0.02) when compared with the American Heart Association diet. Results were consistent after adjustment for age, race, baseline waist circumference, diabetes mellitus, and prior myocardial infarction (adjusted β, 0.67 [0.47–0.94], P=0.02). The degree of reduction in body mass index and waist circumference did not significantly differ between the 2 diet groups (adjusted β, 0.99 [0.97–1.00], P=0.10; and adjusted β, 1.00 [0.98–1.01], P=0.66, respectively). There were also no significant differences in markers of glycemic control between the 2 diet groups. There was a nonsignificant 13% reduction in low‐density lipoprotein cholesterol with the vegan diet when compared with the American Heart Association diet (adjusted β, 0.87 [0.78–0.97], P=0.01). There were no significant differences in other lipid parameters.

In patients with coronary artery disease on guideline‐directed medical therapy, a vegan diet may be considered to lower high‐sensitivity C‐reactive protein as a risk marker of adverse outcomes.

A.G. Olsson,  J McMurray,  G Thorgeirsson … (1994)
Drug therapy for hypercholesterolaemia has remained controversial mainly because of insufficient clinical trial evidence for improved survival. The present trial was designed to evaluate the effect of cholesterol lowering with simvastatin on mortality and morbidity in patients with coronary heart disease (CHD). 4444 patients with angina pectoris or previous myocardial infarction and serum cholesterol 5.5-8.0 mmol/L on a lipid-lowering diet were randomised to double-blind treatment with simvastatin or placebo. Over the 5.4 years median follow-up period, simvastatin produced mean changes in total cholesterol, low-density-lipoprotein cholesterol, and high-density-lipoprotein cholesterol of -25%, -35%, and +8%, respectively, with few adverse effects. 256 patients (12%) in the placebo group died, compared with 182 (8%) in the simvastatin group. The relative risk of death in the simvastatin group was 0.70 (95% CI 0.58-0.85, p = 0.0003). The 6-year probabilities of survival in the placebo and simvastatin groups were 87.6% and 91.3%, respectively. There were 189 coronary deaths in the placebo group and 111 in the simvastatin group (relative risk 0.58, 95% CI 0.46-0.73), while noncardiovascular causes accounted for 49 and 46 deaths, respectively. 622 patients (28%) in the placebo group and 431 (19%) in the simvastatin group had one or more major coronary events. The relative risk was 0.66 (95% CI 0.59-0.75, p < 0.00001), and the respective probabilities of escaping such events were 70.5% and 79.6%. This risk was also significantly reduced in subgroups consisting of women and patients of both sexes aged 60 or more. Other benefits of treatment included a 37% reduction (p < 0.00001) in the risk of undergoing myocardial revascularisation procedures. This study shows that long-term treatment with simvastatin is safe and improves survival in CHD patients.

Associations of fats and carbohydrate intake with cardiovascular disease and mortality in 18 countries from five continents (PURE): a prospective cohort study

Mahshid Dehghan,  Andrew Mente,  Xiaohe Zhang … (2017)
The relationship between macronutrients and cardiovascular disease and mortality is controversial. Most available data are from European and North American populations where nutrition excess is more likely, so their applicability to other populations is unclear.

Charley A Budgeon,  J W Eikelboom,  John L P Thompson … (2013)
The objective of this study was to determine whether colchicine 0.5 mg/day can reduce the risk of cardiovascular events in patients with clinically stable coronary disease. The presence of activated neutrophils in culprit atherosclerotic plaques of patients with unstable coronary disease raises the possibility that inhibition of neutrophil function with colchicine may reduce the risk of plaque instability and thereby improve clinical outcomes in patients with stable coronary disease. In a clinical trial with a prospective, randomized, observer-blinded endpoint design, 532 patients with stable coronary disease receiving aspirin and/or clopidogrel (93%) and statins (95%) were randomly assigned colchicine 0.5 mg/day or no colchicine and followed for a median of 3 years. The primary outcome was the composite incidence of acute coronary syndrome, out-of-hospital cardiac arrest, or noncardioembolic ischemic stroke. The primary analysis was by intention-to-treat. The primary outcome occurred in 15 of 282 patients (5.3%) who received colchicine and 40 of 250 patients (16.0%) assigned no colchicine (hazard ratio: 0.33; 95% confidence interval [CI] 0.18 to 0.59; p < 0.001; number needed to treat: 11). In a pre-specified secondary on-treatment analysis that excluded 32 patients (11%) assigned to colchicine who withdrew within 30 days due to intestinal intolerance and a further 7 patients (2%) who did not start treatment, the primary outcome occurred in 4.5% versus 16.0% (hazard ratio: 0.29; 95% CI: 0.15 to 0.56; p < 0.001). Colchicine 0.5 mg/day administered in addition to statins and other standard secondary prevention therapies appeared effective for the prevention of cardiovascular events in patients with stable coronary disease. Copyright © 2013 American College of Cardiology Foundation. Published by Elsevier Inc. All rights reserved.