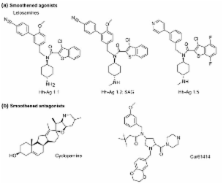 Small-molecule antagonists of Hedgehog-pathway signaling, such as cyclopamine, have been known for some time. Now, small-molecule agonists of the Hedgehog pathway have also been identified. The finding that both antagonists and agonists target the protein Smoothened supports the emerging hypothesis that Smoothened may be regulated by endogenous small molecules.

Edmond W K Young,  P P-C Chiang,  Philip A. Beachy … (1996)
Targeted gene disruption in the mouse shows that the Sonic hedgehog (Shh) gene plays a critical role in patterning of vertebrate embryonic tissues, including the brain and spinal cord, the axial skeleton and the limbs. Early defects are observed in the establishment or maintenance of midline structures, such as the notochord and the floorplate, and later defects include absence of distal limb structures, cyclopia, absence of ventral cell types within the neural tube, and absence of the spinal column and most of the ribs. Defects in all tissues extend beyond the normal sites of Shh transcription, confirming the proposed role of Shh proteins as an extracellular signal required for the tissue-organizing properties of several vertebrate patterning centres.