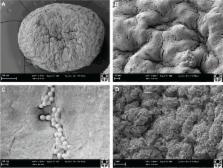 The authors have previously designed, developed, and characterized a novel microencapsulated formulation as a platform for the targeted delivery of therapeutics in an animal model of type 2 diabetes, using the drug probucol (PB). The aim of this study was to optimize PB microcapsules by incorporating the bile acid deoxycholic acid (DCA), which has good permeation-enhancing properties, and to examine its effect on microcapsules’ morphology, rheology, structural and surface characteristics, and excipients’ chemical and thermal compatibilities. Microencapsulation was carried out using a BÜCHI-based microencapsulating system established in the authors’ laboratory. Using the polymer sodium alginate (SA), two microencapsulated formulations were prepared: PB-SA (control) and PB-DCA-SA (test) at a constant ratio (1:30 and 1:3:30, respectively). Complete characterization of the microcapsules was carried out. The incorporation of DCA resulted in better structural and surface characteristics, uniform morphology, and stable chemical and thermal profiles, while size and rheological parameters remained similar to control. In addition, PB-DCA-SA microcapsules showed good excipients’ compatibilities, which were supported by data from differential scanning calorimetry, Fourier transform infrared spectroscopy, scanning electron microscopy, and energy dispersive X-ray studies, suggesting microcapsule stability. Hence, PB-DCA-SA microcapsules have good rheological and compatibility characteristics and may be suitable for the oral delivery of PB in type 2 diabetes.

Oxidative stress and the use of antioxidants in diabetes: Linking basic science to clinical practice

Jeanette Schultz Johansen,  Alex K Harris,  David Rychly … (2005)
Cardiovascular complications, characterized by endothelial dysfunction and accelerated atherosclerosis, are the leading cause of morbidity and mortality associated with diabetes. There is growing evidence that excess generation of highly reactive free radicals, largely due to hyperglycemia, causes oxidative stress, which further exacerbates the development and progression of diabetes and its complications. Overproduction and/or insufficient removal of these free radicals result in vascular dysfunction, damage to cellular proteins, membrane lipids and nucleic acids. Despite overwhelming evidence on the damaging consequences of oxidative stress and its role in experimental diabetes, large scale clinical trials with classic antioxidants failed to demonstrate any benefit for diabetic patients. As our understanding of the mechanisms of free radical generation evolves, it is becoming clear that rather than merely scavenging reactive radicals, a more comprehensive approach aimed at preventing the generation of these reactive species as well as scavenging may prove more beneficial. Therefore, new strategies with classic as well as new antioxidants should be implemented in the treatment of diabetes.

Where are we with probucol: a new life for an old drug?

Shizuya Yamashita,  Yuji Matsuzawa (2009)
Probucol has a long history of clinical application with established efficacy and safety profiles. Probucol is a potent anti-oxidant drug that has been in clinical use during the past few decades for the treatment and prevention of cardiovascular diseases. Here we review the current status of knowledge on the pharmacology, clinical benefits, and the mechanism of actions of this unique drug. Probucol has diverse pharmacological properties with therapeutic effects on the cardiovascular systems. Its mechanism of pharmacologic actions at the molecular level has recently been elucidated with the new concept of HDL metabolism associated with cholesteryl ester transfer protein (CETP) or scavenger receptor class B type I (SR-BI). HDL-C reduction may not be a "side effect" but it most likely might reflect a mechanism of action of probucol. Probucol could be reconsidered as an option at least in case statins, which are known to be effective in lowering low-density lipoproteins (LDL) and coronary artery disease (CAD) risk, are not effective. In particular, a marked CAD risk reduction has been recently reported in long-term probucol treatment of patients with heterozygous familial hypercholesterolemia (FH) in Japan. Therefore, probucol could be a more common therapeutic drug for the treatment of patients with FH as well. There is more than enough reason to believe that this old drug has much more to offer than hitherto known.