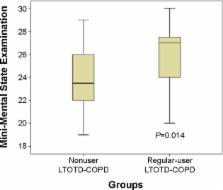 A number of studies have shown that COPD, particularly in its later and more severe stages, is associated with various cognitive deficits. Thus, the primary goal of the present study was to elucidate the extent of cognitive impairment in patients with long-term oxygen therapy-dependent (LTOTD) COPD. In addition, this study aimed to determine the effectiveness of two cognitive screening tests, the Mini-Mental State Examination (MMSE) and the Montreal Cognitive Assessment (MoCA), for COPD patients and the ability of oxygen therapy to mitigate COPD-related deficits in cognitive function.

The present study enrolled 45 subjects: 24 nonuser and 21 regular-user LTOTD-COPD patients. All subjects had a similar grade of education, and there were no significant differences regarding age or sex. The MoCA (cutoff: <26 points) and MMSE (cutoff: ≤24 points) scores were compared between these two groups.

The nonuser LTOTD-COPD group had a significantly lower MoCA score than that of the regular-user LTOTD-COPD group (19.38±2.99 vs 21.68±2.14, respectively) as well as a significantly lower MMSE score. Moreover, the absence of supplemental oxygen therapy increased the risk of cognitive impairment (MoCA, P=0.007 and MMSE, P=0.014), and the MoCA and MMSE scores significantly correlated with the number of emergency admissions and the number of hospitalizations in the last year.

The Montreal Cognitive Assessment: validity and utility in a memory clinic setting.

Andrew T. Smith,  Clive Holmes,  Nadia Gildeh (2007)
To prospectively validate the Montreal Cognitive Assessment (MoCA) in a UK memory clinic. We administered the MoCA and Mini-Mental State Examination (MMSE) to 32 subjects fulfilling diagnostic criteria for dementia, to 23 subjects fulfilling diagnostic criteria for mild cognitive impairment (MCI), and to 12 memory clinic comparison subjects, at baseline and then at 6-month follow-up. Clinical diagnoses for dementia and MCI were made according to ICD-10 and Petersen criteria. The sensitivity and specificity of both measures were assessed for detection of MCI and dementia. With a cut-off score of 26, the MMSE had a sensitivity of 17% to detect subjects with MCI, whereas the MoCA detected 83%. The MMSE had a sensitivity of 25% to detect subjects with dementia, whereas the MoCA detected 94%. Specificity for the MMSE was 100%, and specificity for the MoCA was 50%. Of subjects with MCI, 35% developed dementia within 6 months, and all scored less than 26 points on the MoCA at baseline. The MoCA is a useful brief screening tool for the detection of mild dementia or MCI in subjects scoring over 25 points on the MMSE. In patients already diagnosed with MCI, the MoCA helps identify those at risk of developing dementia at 6-month follow-up.

Christine Sattler,  Pablo Toro,  Peter Schönknecht … (2012)
Growing epidemiological evidence suggests that premorbid participation in cognitive leisure activities (CLA) reduces the risk of dementia by increasing cognitive reserve. We investigated the differential effect of CLA, education, and socioeconomic status (SES) on the development of mild cognitive impairment (MCI) and Alzheimer's disease (AD). Participants in the prospective population-based ILSE study (*1930-1932; 12-year follow-up) were examined in three examination waves (t1:1993/94; t2:1997/98; t3:2005/07). In total, 381 subjects of the original cohort (n=500) were re-examined at t3. Of these subjects 29% received the diagnosis of MCI and 7% of AD. Subjects participated in a thorough psychogeriatric examination and neuropsychological testing. Moreover, they took part in a detailed autobiographical interview and completed questionnaires including socio-demographic data and current frequency of participation in CLA. Subjects who were highly cognitively active at t1 had a significantly reduced risk of developing MCI/AD at t3 (scores adjusted for education, SES, gender, and depressive symptoms). Additionally, high education and high SES separately reduced the risk of MCI and AD. Our results confirm the hypothesis that a high level of CLA acts as a protective factor against the development of MCI and AD by increasing cognitive reserve. This effect is not accounted for by important potential confounders. Copyright © 2012 Elsevier Ltd. All rights reserved.