Ameliorative Effects of PACAP against Cartilage Degeneration. Morphological, Immunohistochemical and Biochemical Evidence from in Vivo and in Vitro Models of Rat Osteoarthritis 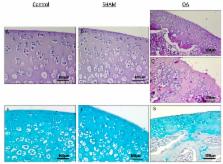 Osteoarthritis (OA); the most common form of degenerative joint disease, is associated with variations in pro-inflammatory growth factor levels, inflammation and hypocellularity resulting from chondrocyte apoptosis. Pituitary adenylate cyclase-activating polypeptide (PACAP) is a neuropeptide endowed with a range of trophic effects in several cell types; including chondrocytes. However; its role in OA has not been studied. To address this issue, we investigated whether PACAP expression is affected in OA cartilage obtained from experimentally-induced OA rat models, and then studied the effects of PACAP in isolated chondrocytes exposed to IL-1β in vitro to mimic the inflammatory milieu of OA cartilage. OA induction was established by histomorphometric and histochemical analyses. Changes in PACAP distribution in cartilage, or its concentration in synovial fluid (SF), were assessed by immunohistochemistry and ELISA. Results showed that PACAP abundance in cartilage tissue and SF was high in healthy controls. OA induction decreased PACAP levels both in affected cartilage and SF. In vitro, PACAP prevented IL-1β-induced chondrocyte apoptosis, as determined by MTT assay; Hoechst staining and western blots of apoptotic-related proteins. These changes were also accompanied by decreased i-NOS and COX-2 levels, suggesting an anti-inflammatory effect. Altogether, these findings support a potential role for PACAP as a chondroprotective agent for the treatment of OA.

VPAC and PAC receptors: From ligands to function.

Louise Dickson,  Keith Finlayson (2009)
Vasoactive intestinal peptide (VIP) and the pituitary adenylate cyclase activating polypeptides (PACAPs) share 68% identity at the amino acid level and belong to the secretin peptide family. Following the initial discovery of VIP almost four decades ago a substantial amount of knowledge has been presented describing the mechanisms of action, distribution and pleiotropic functions of these related peptides. It is now known that the physiological actions of these widely distributed peptides are produced through activation of three common G-protein coupled receptors (VPAC(1), VPAC(2) and PAC(1)R) which preferentially stimulate adenylate cyclase and increase intracellular cAMP, although stimulation of other intracellular messengers, including calcium and phospholipase D, has been reported. Using a range of in vitro and in vivo approaches, including cell-based functional assays, transgenic animals and rodent models of disease, VPAC/PAC receptor activation has been associated with numerous physiological processes (e.g. control of circadian rhythms) and clinical conditions (e.g. pulmonary hypertension), which underlies on-going research efforts and makes these peptides and their cognate receptors attractive targets for the pharmaceutical industry. However, despite the considerable interest in VPAC/PAC receptors and the processes which they mediate, there is still a paucity of selective and available, non-peptide ligands, which has hindered further advances in this field both at the basic research and clinical level. This review summarises the current knowledge of VIP/PACAP and the VPAC/PAC receptors with regard to their distribution, pharmacology, signalling pathways, splice variants and finally, the utility of animal models in exploring their physiological roles.

Macroscopic and histopathologic analysis of human knee menisci in aging and osteoarthritis.

Magdalena Koziol,  C Pauli,  A Hasegawa … (2011)
Meniscus lesions following trauma or associated with osteoarthritis (OA) have been described, yet meniscus aging has not been systematically analyzed. The objectives of this study were to (1) establish standardized protocols for representative macroscopic and microscopic analysis, (2) improve existing scoring systems, and (3) apply these techniques to a large number of human menisci. Medial and lateral menisci from 107 human knees were obtained and cut in two different planes (triangle/cross section and transverse/horizontal section as well) in three separate locations (middle portion, anterior and posterior horns). All sections included vascular and avascular regions and were graded for (1) surface integrity, (2) cellularity, (3) matrix/fiber organization and collagen alignment, and (4) Safranin-O staining intensity. The cartilage in all knee compartments was also scored. The new macroscopic and microscopic grading systems showed high inter-reader and intra-reader intraclass correlation coefficients. The major age-related changes in menisci in joints with no or minimal OA included increased Safranin-O staining intensity, decreased cell density, the appearance of acellular zones, and evidence of mucoid degeneration with some loss of collagen fiber organization. The earliest meniscus changes occurred predominantly along the inner rim. Menisci from OA joints showed severe fibrocartilaginous separation of the matrix, extensive fraying, tears and calcification. Abnormal cell arrangements included decreased cellularity, diffuse hypercellularity along with cellular hypertrophy and abnormal cell clusters. In general, the anterior horns of both medial and lateral menisci were less affected by age and OA. New standardized protocols and new validated grading systems allowed us to conduct a more systematic evaluation of changes in aging and OA menisci at a macroscopic and microscopic level. Several meniscus abnormalities appear to be specific to aging in the absence of significant OA. With aging the meniscal surface can be intact but abnormal matrix organization and cellularity were observed within the meniscal substance. The increased Safranin-O staining appears to represent a shift from fibroblastic to chondrocytic phenotype during aging and early degeneration. Copyright © 2011 Osteoarthritis Research Society International. Published by Elsevier Ltd. All rights reserved.