A cross-sectional survey of practices and knowledge among antibiotic retailers in Nairobi, Kenya 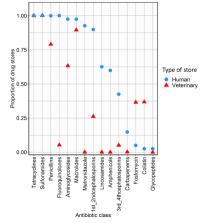 Antimicrobial resistance (AMR) driven by antibiotic consumption is a growing global health threat. However, data on antimicrobial consumption patterns in low- and middle-income countries (LMICs) is sparse. Here, we investigate the patterns of antibiotic sales in humans and livestock in urban Nairobi, Kenya, and evaluate the level of awareness and common behaviours related to antibiotic use and AMR amongst human and veterinary pharmacists.

A total of 40 human and 19 veterinary drug store pharmacists were interviewed in Nairobi in 2018 using a standard questionnaire. Data recorded included demographic variables, types of antibiotics sold, antibiotic customers, antibiotic prescribing practices and knowledge of antibiotic use and AMR.

Our study shows that at the retail level, there is a considerable overlap between antibiotic classes (10/15) sold for use in both human and veterinary medicine. Whilst in our study, clinical training significantly influenced knowledge on issues related to antibiotic use and AMR and respondents had a relatively adequate level of knowledge about AMR, several inappropriate prescribing practices were identified. For example, we found that most veterinary and human drug stores (100% and 52% respectively) sold antibiotics without a prescription and noted that customer preference was an important factor when prescribing antibiotics in half of the drug stores.

Although more research is needed to understand the drivers of antibiotic consumption in both human and animal populations, these findings highlight the need for immediate strategies to improve prescribing practices across the pharmacists in Nairobi and by extension other low- and middle-income country settings.

The Scree Test For The Number Of Factors

Emergence of plasmid-mediated colistin resistance mechanism MCR-1 in animals and human beings in China: a microbiological and molecular biological study.