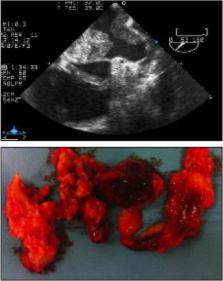 Cardiac tumors are exceedingly rare (0.001–0.03% in most autopsy series). They can be present anywhere within the heart and can be attached to any surface or be embedded in the myocardium or pericardial space. Signs and symptoms are nonspecific and highly variable related to the localization, size and composition of the cardiac mass. Echocardiography, typically performed for another indication, may be the first imaging modality alerting the clinician to the presence of a cardiac mass. Although echocardiography cannot give the histopathology, certain imaging features and adjunctive tools such as contrast imaging may aid in the differential diagnosis as do the adjunctive clinical data and the following principles: (1) thrombus or vegetations are the most likely etiology, (2) cardiac tumors are mostly secondary and (3) primary cardiac tumors are mostly benign. Although the finding of a cardiac mass on echocardiography may generate confusion, a stepwise approach may serve well practically. Herein, we will review such an approach and the role of echocardiography in the assessment of cardiac masses.

K Reynen (1995)
Although cardiac myxomas are histologically benign, they may be lethal because of their strategic position. They can mimic not only every cardiac disease but also infective, immunologic, and malignant processes. Myxomas must therefore be included in the differential diagnosis of valvular heart disease, cardiac insufficiency, cardiomegaly, bacterial endocarditis, disturbances of ventricular and supraventricular rhythm, syncope, and systemic or pulmonary embolism. The symptoms depend on the size, mobility, and location of the tumor. Echocardiography, including the transesophageal approach, is the most important means of diagnosis; CT and MRI may also be helpful. Coronary arteriography in patients over 40 years of age is generally required to rule out concomitant coronary artery disease. Surgical removal of the tumor should be performed as soon as possible; the long-term prognosis is excellent, and recurrences are rare. In follow-up examinations as well, echocardiography is essential.

Tumors of the heart. A 20-year experience with a review of 12,485 consecutive autopsies.

Patrick C. H. Chan,  Andy P Dickens,  Hugo Lam (1993)
Cardiac involvement by primary and secondary tumors is one of the least investigated subjects in oncology. Seven cases of primary and 154 cases of secondary cardiac tumors from autopsies performed over a 20-year period (1972 through 1991) at Queen Mary Hospital, Hong Kong, were reviewed. During this period, 12,485 autopsies were performed, and the autopsy incidence for primary and secondary heart tumors is thus 0.056% and 1.23%, respectively. Only seven primary cardiac tumors were found, including two myxomas, two rhabdomyomas, two hemangiomas, and one lipoma. For secondary tumors involving the heart (including both metastasis and local extension), important primary tumors in male subjects were carcinoma of the lung (31.7%), esophageal carcinoma (28.7%), lymphoma (11.9%), carcinoma of the liver (6.9%), leukemia (4.0%), and gastric carcinoma (4.0%), while in female subjects, carcinoma of the lung (35.9%), lymphoma (17.0%), carcinoma of the breast (7.5%), and pancreatic carcinoma (7.5%) predominated. Overall, the three most common malignant neoplasms encountered were carcinoma of the lung, esophageal carcinoma, and lymphoma. Pericardium, including epicardium, was the most common location of cardiac involvement by secondary tumors, followed by myocardium and endocardium. The present study showed a higher percentage of esophageal carcinoma and carcinoma of the liver (reflecting the higher incidence of these tumors in Hong Kong Chinese), but a lower incidence of carcinoma of the breast when compared with other series. The metastatic lung tumors showed an unusual predominance of adenocarcinoma.

Ramesh Gowda,  Ijaz Khan,  Chandra Nair … (2003)
With the advent of echocardiography, cardiac papillary fibroelastoma (CPF) is being increasingly reported. The demographics, clinical characteristics, pathological features, treatment, and prognosis of CPF are examined. Cases, case series and related articles on the subject in all languages were identified through a comprehensive literature search. Seven hundred twenty-five cases of CPF were identified. Males comprised 55% of patients. Highest prevalence was in the 8th decade of life. The valvular surface was the predominant locations of tumor. The most commonly involved valve was the aortic valve, followed by the mitral valve. The left ventricle was the predominant nonvalvular site involved. No clear risk factor for development of CPF has been reported. Size of the tumor varied from 2 mm to 70 mm. Clinically, CPFs have presented with transient ischemic attack, stroke, myocardial infarction, sudden death, heart failure, presyncope, syncope, pulmonary embolism, blindness, and peripheral embolism. Tumor mobility was the only independent predictor of CPF-related death or nonfatal embolization. Symptomatic patients should be treated surgically because the successful complete resection of CPF is curative and the long-term postoperative prognosis is excellent. The symptomatic patients who are not surgical candidates could be offered long-term oral anticoagulation, although no randomized controlled data are available on its efficacy. Asymptomatic patients could be treated surgically if the tumor is mobile, as the tumor mobility is the independent predictor of death or nonfatal embolization. Asymptomatic patients with nonmobile CPF could be followed-up closely with periodic clinical evaluation and echocardiography, and receive surgical intervention when symptoms develop or the tumor becomes mobile.

Correspondence should be addressed to J Herrmann; Email: herrmann.joerg@ 123456mayo.edu