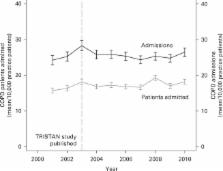 To investigate the impact of rising primary care prescribing of LAMA and LABA+ICS drugs on COPD admissions.

This retrospective cohort study of general practice COPD admission and prescribing data between 2007 and 2010 comprised a representative group of 806 English general practices (population 5,264,506). Outcome measures were practice rates of COPD patient admissions and prescription costs of LAMA and LABA+ICS. General practice characteristics were based on the UK quality and outcomes framework.

Spurious Correlation and the Fallacy of the Ratio Standard Revisited

F. Ram,  Gabriela A C G Camargo,  J Bourbeau … (2006)
A systematic review was undertaken to evaluate the efficacy of tiotropium, a long acting anticholinergic drug, on clinical events, symptom scales, pulmonary function, and adverse events in stable chronic obstructive pulmonary disease (COPD). A systematic search was made of the Cochrane trials database, MEDLINE, EMBASE, CINAHL, and a hand search of 20 respiratory journals. Missing data were obtained from authors and the manufacturer. Randomised controlled trials of > or =12 weeks' duration comparing tiotropium with placebo, ipratropium bromide, or long acting beta2 agonists (LABA) were reviewed. Studies were pooled to yield odds ratios (OR) or weighted mean differences with 95% confidence intervals (CI). Nine trials (8002 patients) met the inclusion criteria. Tiotropium reduced the odds of a COPD exacerbation (OR 0.73; 95% CI 0.66 to 0.81) and related hospitalisation (OR 0.68; 95% CI 0.54 to 0.84) but not pulmonary (OR 0.50; 95% CI 0.19 to 1.29) or all-cause (OR 0.96; 95% CI 0.63 to 1.47) mortality compared with placebo and ipratropium. Reductions in exacerbations and hospitalisations compared with LABA were not statistically significant. Similar patterns were evident for quality of life and symptom scales. Tiotropium yielded greater increases in forced expiratory volume in 1 second (FEV1) and forced vital capacity (FVC) from baseline to 6-12 months than did placebo, ipratropium, and LABA. Decline in FEV1 over 1 year was 30 ml (95% CI 7 to 53) slower with tiotropium than with placebo and ipratropium (data were not available for LABA). Reports of dry mouth and urinary tract infections were increased with tiotropium. Tiotropium reduced COPD exacerbations and related hospitalisations, improved quality of life and symptoms, and may have slowed the decline in FEV1. Long term trials are warranted to evaluate the effects of tiotropium on decline in FEV1 and to clarify its role compared with LABA.

Nicholas Chong,  Daniel P. Poole,  Charlotta Karner (2011)
Tiotropium is an anticholinergic agent which has gained widespread acceptance as a once daily maintenance therapy for symptoms and exacerbations of stable chronic obstructive pulmonary disease (COPD). In the past few years there have been several systematic reviews of the efficacy of tiotropium, however, several new trials have compared tiotropium treatment with placebo, including those of a soft mist inhaler, making an update necessary. To evaluate data from randomised controlled trials (RCTs) comparing the efficacy of tiotropium and placebo in patients with COPD, upon clinically important endpoints. We searched the Cochrane Airways Group's Specialised Register of Trials (CAGR) and ClinicalTrials.gov up to February 2012. We included parallel group RCTs of three months or longer comparing treatment with tiotropium against placebo for patients with COPD. Two review authors independently assessed studies for inclusion and then extracted data on study quality and the outcome results. We contacted study authors and trial sponsors for additional information, and collected information on adverse effects from all trials. We analysed the data using Cochrane Review Manager 5, RevMan 5.1. This review included 22 studies of good methodological quality that had enrolled 23,309 participants with COPD. The studies used similar designs, however, the duration varied from three months to four years. In 19 of the studies, 18 μg tiotropium once daily via the Handihaler dry powder inhaler was evaluated, and in three studies, 5 or 10 μg tiotropium once daily via the Respimat soft mist inhaler was evaluated. Compared to placebo, tiotropium treatment significantly improved the mean quality of life (mean difference (MD) -2.89; 95% confidence interval (CI) -3.35 to -2.44), increased the number of participants with a clinically significant improvement (odds ratio (OR) 1.52; 95% CI 1.38 to 1.68), and reduced the number of participants with a clinically significant deterioration (OR 0.65; 95% CI 0.59 to 0.72) in quality of life (measured by the St George's Respiratory Questionnaire (SGRQ)). Tiotropium treatment significantly reduced the number of participants suffering from exacerbations (OR 0.78; 95% CI 0.70 to 0.87). This corresponds to a need to treat 16 patients (95% CI 10 to 36) with tiotropium for a year in order to avoid one additional patient suffering exacerbations, based on the average placebo event rate of 44% from one-year studies. Tiotropium treatment led to fewer hospitalisations due to exacerbations (OR 0.85; 95% CI 0.72 to 1.00), but there was no statistically significant difference in all-cause hospitalisations (OR 1.00; 95% CI 0.88 to 1.13) or non-fatal serious adverse events (OR 1.03; 95% CI 0.97 to 1.10). Additionally, there was no statistically significant difference in all-cause mortality between the tiotropium and placebo groups (Peto OR 0.98; 95% CI 0.86 to 1.11). However, subgroup analysis found a significant difference between the studies using a dry powder inhaler and those with a soft mist inhaler (test for subgroup differences: P = 0.01). With the dry powder inhaler there were fewer deaths in the tiotropium group (Peto OR 0.92; 95% CI 0.80 to 1.05) than in the placebo group (yearly rate 2.8%), but with the soft mist inhaler there were significantly more deaths in the tiotropium group (Peto OR 1.47; 95% CI 1.04 to 2.08) than in the placebo group (yearly rate 1.8%). It is noted that the rates of patients discontinuing study treatment were uneven, with significantly fewer participants withdrawing from tiotropium treatment than from placebo treatment (OR 0.66; 95% CI 0.59 to 0.73). Participants on tiotropium had improved lung function at the end of the study compared with those on placebo (trough forced expiratory volume in one second (FEV(1)) MD 118.92 mL; 95% CI 113.07 to 124.77). This review shows that tiotropium treatment was associated with a significant improvement in patients' quality of life and it reduced the risk of exacerbations, with a number needed to treat to benefit (NNTB) of 16 to prevent one exacerbation. Tiotropium also reduced exacerbations leading to hospitalisation but no significant difference was found for hospitalisation of any cause or mortality. Thus, tiotropium appears to be a reasonable choice for the management of patients with stable COPD, as proposed in guidelines. The review however, shows that tiotropium delivered via the Respimat soft mist inhaler was associated with a significantly increased risk of mortality compared with placebo, which calls for caution with this device whilst awaiting the results of an ongoing head-to-head trial comparing tiotropium delivery devices and doses.