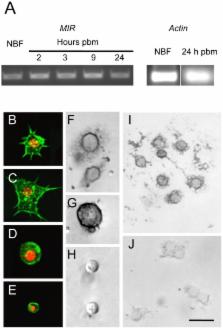 All vector mosquito species must feed on the blood of a vertebrate host to produce eggs. Multiple cycles of blood feeding also promote frequent contacts with hosts, which enhance the risk of exposure to infectious agents and disease transmission. Blood feeding triggers the release of insulin-like peptides (ILPs) from the brain of the mosquito Aedes aegypti, which regulate blood meal digestion and egg formation. In turn, hemocytes serve as the most important constitutive defense in mosquitoes against pathogens that enter the hemocoel. Prior studies indicated that blood feeding stimulates hemocytes to increase in abundance, but how this increase in abundance is regulated is unknown. Here, we determined that phagocytic granulocytes and oenocytoids express the A. aegypti insulin receptor ( AaMIR). We then showed that: 1) decapitation of mosquitoes after blood feeding inhibited hemocyte proliferation, 2) a single dose of insulin-like peptide 3 (ILP3) sufficient to stimulate egg production rescued proliferation, and 3) knockdown of the AaMIR inhibited ILP3 rescue activity. Infection studies indicated that increased hemocyte abundance enhanced clearance of the bacterium Escherichia coli at lower levels of infection. Surprisingly, however, non-blood fed females better survived intermediate and high levels of E. coli infection than blood fed females. Taken together, our results reveal a previously unrecognized role for the insulin signaling pathway in regulating hemocyte proliferation. Our results also indicate that blood feeding enhances resistance to E. coli at lower levels of infection but reduces tolerance at higher levels of infection.

Mosquitoes are vectors of several important diseases of humans and other mammals including Dengue fever, malaria and filariasis. These diseases adversely affect worldwide health by killing or debilitating millions of individuals. The key feature of mosquito biology that makes them such important disease vectors is that adult females must feed on the blood of their vertebrate host(s) to produce eggs. In turn, repeated bouts of blood feeding and egg development elevate the risk of mosquitoes feeding on an infected host and transmitting a given pathogen from one individual to another. A key regulator of egg development following blood feeding is the release of insulin-like peptides from the mosquito brain. We have found that insulin-like peptides enhance production of immune cells (hemocytes) that serve as the first line of defense against infection. Conversely, the molecular pathways that regulate egg development and hemocyte proliferation reduce the ability of mosquitoes to tolerate a persistent systemic infection. Taken together, our results indicate that trade-offs exist between reproduction and immune defense in mosquitoes, which is a subject of fundamental interest to evolutionary biologists and of applied importance in understanding disease transmission.

Insect hemocytes and their role in immunity.

M.D. Lavine,  M.R. Strand (2002)
The innate immune system of insects is divided into humoral and cellular defense responses. Humoral defenses include antimicrobial peptides, the cascades that regulate coagulation and melanization of hemolymph, and the production of reactive intermediates of oxygen and nitrogen. Cellular defenses refer to hemocyte-mediated responses like phagocytosis and encapsulation. In this review, we discuss the cellular immune responses of insects with emphasis on studies in Lepidoptera and Diptera. Insect hemocytes originate from mesodermally derived stem cells that differentiate into specific lineages identified by morphology, function, and molecular markers. In Lepidoptera, most cellular defense responses involve granular cells and plasmatocytes, whereas in Drosophila they involve primarily plasmatocytes and lamellocytes. Insect hemocytes recognize a variety of foreign targets as well as alterations to self. Both humoral and cell surface receptors are involved in these recognition events. Once a target is recognized as foreign, hemocyte-mediated defense responses are regulated by signaling factors and effector molecules that control cell adhesion and cytotoxicity. Several lines of evidence indicate that humoral and cellular defense responses are well-coordinated with one another. Cross-talk between the immune and nervous system may also play a role in regulating inflammation-like responses in insects during infection.

Disentangling genetic variation for resistance and tolerance to infectious diseases in animals.

Lars Råberg,  Derek Sim,  Andrew Read (2007)
Hosts can in principle employ two different strategies to defend themselves against parasites: resistance and tolerance. Animals typically exhibit considerable genetic variation for resistance (the ability to limit parasite burden). However, little is known about whether animals can evolve tolerance (the ability to limit the damage caused by a given parasite burden). Using rodent malaria in laboratory mice as a model system and the statistical framework developed by plant-pathogen biologists, we demonstrated genetic variation for tolerance, as measured by the extent to which anemia and weight loss increased with increasing parasite burden. Moreover, resistance and tolerance were negatively genetically correlated. These results mean that animals, like plants, can evolve two conceptually different types of defense, a finding that has important implications for the understanding of the epidemiology and evolution of infectious diseases.

Two ways to survive infection: what resistance and tolerance can teach us about treating infectious diseases.

S. Schneider,  Janelle Ayres (2008)
A host can evolve two types of defence mechanism to increase its fitness when challenged with a pathogen: resistance and tolerance. Immunology is a well-defined field in which the mechanisms behind resistance to infection are dissected. By contrast, the mechanisms behind the ability to tolerate infections are studied in a less methodical manner. In this Opinion, we provide evidence that animals have specific tolerance mechanisms and discuss their potential clinical impact. It is important to distinguish between these two defence mechanisms because they have different pathological and epidemiological effects. An increased understanding of tolerance to pathogen infection could lead to more efficient treatments for infectious diseases and a better description of host-pathogen interactions.

Publisher ID: PPATHOGENS-D-11-01098
DOI: 10.1371/journal.ppat.1002274
PMC ID: 3188524
PubMed ID: 21998579
Copyright statement: Castillo et al. This is an open-access article distributed under the terms of the Creative Commons Attribution License, which permits unrestricted use, distribution, and reproduction in any medium, provided the original author and source are credited.