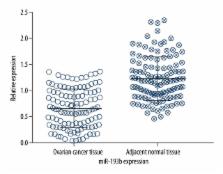 MiRNAs play important roles in regulating many fundamental biological processes. Deregulation of miRNAs is involved in the initiation and progression of cancer. MiR-193b is regarded as tumor suppressor in many types of cancers. However, the role of miR-193b in ovarian cancer is poorly understood.

Reduction of miR-193b was found in ovarian cancer and its lower expression was associated with poorer prognosis. Tissue miR-193b showed potential as novel biomarker for ovarian cancer.

Manel Esteller (2011)
The relevance of the non-coding genome to human disease has mainly been studied in the context of the widespread disruption of microRNA (miRNA) expression and function that is seen in human cancer. However, we are only beginning to understand the nature and extent of the involvement of non-coding RNAs (ncRNAs) in disease. Other ncRNAs, such as PIWI-interacting RNAs (piRNAs), small nucleolar RNAs (snoRNAs), transcribed ultraconserved regions (T-UCRs) and large intergenic non-coding RNAs (lincRNAs) are emerging as key elements of cellular homeostasis. Along with microRNAs, dysregulation of these ncRNAs is being found to have relevance not only to tumorigenesis, but also to neurological, cardiovascular, developmental and other diseases. There is great interest in therapeutic strategies to counteract these perturbations of ncRNAs.

Many roads to maturity: microRNA biogenesis pathways and their regulation.

Julia Winter,  Sven Diederichs,  Stephanie Jung … (2009)
MicroRNAs are important regulators of gene expression that control both physiological and pathological processes such as development and cancer. Although their mode of action has attracted great attention, the principles governing their expression and activity are only beginning to emerge. Recent studies have introduced a paradigm shift in our understanding of the microRNA biogenesis pathway, which was previously believed to be universal to all microRNAs. Maturation steps specific to individual microRNAs have been uncovered, and these offer a plethora of regulatory options after transcription with multiple proteins affecting microRNA processing efficiency. Here we review the recent advances in knowledge of the microRNA biosynthesis pathways and discuss their impact on post-transcriptional microRNA regulation during tumour development.

microRNAs as oncogenes and tumor suppressors.

Chase Anderson,  Annie S. Anderson,  Baohong Zhang … (2007)
microRNAs (miRNAs) are a new class of non-protein-coding, endogenous, small RNAs. They are important regulatory molecules in animals and plants. miRNA regulates gene expression by translational repression, mRNA cleavage, and mRNA decay initiated by miRNA-guided rapid deadenylation. Recent studies show that some miRNAs regulate cell proliferation and apoptosis processes that are important in cancer formation. By using multiple molecular techniques, which include Northern blot analysis, real-time PCR, miRNA microarray, up- or down-expression of specific miRNAs, it was found that several miRNAs were directly involved in human cancers, including lung, breast, brain, liver, colon cancer, and leukemia. In addition, some miRNAs may function as oncogenes or tumor suppressors. More than 50% of miRNA genes are located in cancer-associated genomic regions or in fragile sites, suggesting that miRNAs may play a more important role in the pathogenesis of a limited range of human cancers than previously thought. Overexpressed miRNAs in cancers, such as mir-17-92, may function as oncogenes and promote cancer development by negatively regulating tumor suppressor genes and/or genes that control cell differentiation or apoptosis. Underexpressed miRNAs in cancers, such as let-7, function as tumor suppressor genes and may inhibit cancers by regulating oncogenes and/or genes that control cell differentiation or apoptosis. miRNA expression profiles may become useful biomarkers for cancer diagnostics. In addition, miRNA therapy could be a powerful tool for cancer prevention and therapeutics.

This work is licensed under a Creative Commons Attribution-NonCommercial-NoDerivs 3.0 Unported License