Management of the patient with eosinophilic asthma: a new era begins 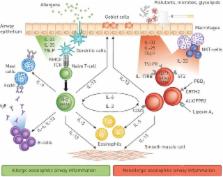 Now that it is generally accepted that asthma is a heterogeneous condition, phenotyping of asthma patients has become a mandatory part of the diagnostic workup of all patients who do not respond satisfactorily to standard therapy with inhaled corticosteroids. Late-onset eosinophilic asthma is currently one of the most well-defined asthma phenotypes and seems to have a different underlying pathobiology to classical childhood-onset, allergic asthma. Patients with this phenotype can be identified in the clinic by typical symptoms (few allergies and dyspnoea on exertion), typical lung function abnormalities (“fixed” airflow obstruction, reduced forced vital capacity and increased residual volume), typical comorbidities (nasal polyposis) and a good response to systemic corticosteroids. The definitive diagnosis is based on evidence of eosinophilia in bronchial biopsies or induced sputum, which can be estimated with reasonable accuracy by eosinophilia in peripheral blood. Until recently, patients with eosinophilic asthma had a very poor quality of life and many suffered from frequent severe exacerbations or were dependent on oral corticosteroids. Now, for the first time, novel biologicals targeting the eosinophil have become available that have been shown to be able to provide full control of this type of refractory asthma, and to become a safe and efficacious substitute for oral corticosteroids.

Human IL-25- and IL-33-responsive type 2 innate lymphoid cells are defined by expression of CRTH2 and CD161.

Jenny M. Mjösberg, Sara Trifari, Natasha K. Crellin … (2011)
Innate lymphoid cells (ILCs) are emerging as a family of effectors and regulators of innate immunity and tissue remodeling. Interleukin 22 (IL-22)- and IL-17-producing ILCs, which depend on the transcription factor RORγt, express CD127 (IL-7 receptor α-chain) and the natural killer cell marker CD161. Here we describe another lineage-negative CD127(+)CD161(+) ILC population found in humans that expressed the chemoattractant receptor CRTH2. These cells responded in vitro to IL-2 plus IL-25 and IL-33 by producing IL-13. CRTH2(+) ILCs were present in fetal and adult lung and gut. In fetal gut, these cells expressed IL-13 but not IL-17 or IL-22. There was enrichment for CRTH2(+) ILCs in nasal polyps of chronic rhinosinusitis, a typical type 2 inflammatory disease. Our data identify a unique type of human ILC that provides an innate source of T helper type 2 (T(H)2) cytokines.

Lebrikizumab treatment in adults with asthma.

Z. Zhu, R. J. Homer, Z. Wang … (1999)
Interleukin (IL)-13 is a pleiotropic cytokine produced in large quantities by activated CD4(+) Th2 lymphocytes. To define further its potential in vivo effector functions, the Clara cell 10-kDa protein promoter was used to express IL-13 selectively in the lung, and the phenotype of the resulting transgenic mice was characterized. In contrast to transgene-negative littermates, the lungs of transgene-positive mice contained an inflammatory response around small and large airways and in the surrounding parenchyma. It was mononuclear in nature and contained significant numbers of eosinophils and enlarged and occasionally multinucleated macrophages. Airway epithelial cell hypertrophy, mucus cell metaplasia, the hyperproduction of neutral and acidic mucus, the deposition of Charcot-Leyden-like crystals, and subepithelial airway fibrosis were also prominently noted. Eotaxin protein and mRNA were also present in large quantities in the lungs of the transgene-positive, but not the transgene-negative, mice. IL-4, IL-5, granulocyte-macrophage colony-stimulating factor, and monocyte chemoattractant protein-5 were not similarly detected. Physiological evaluations revealed significant increases in baseline airways resistance and airways hyperresponsiveness (AHR) to methacholine in transgene-positive animals. Thus, the targeted pulmonary expression of IL-13 causes a mononuclear and eosinophilic inflammatory response, mucus cell metaplasia, the deposition of Charcot-Leyden-like crystals, airway fibrosis, eotaxin production, airways obstruction, and nonspecific AHR. IL-13 may play an important role in the pathogenesis of similar responses in asthma or other Th2-polarized tissue responses.