Anesthetic management of Shah–Waardenburg syndrome: Experience of two cases and review of literature 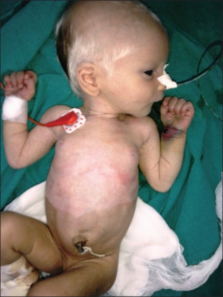 Waardenburg syndrome (WS) is a rare autosomally inherited and genetically heterogeneous disorder of neural crest cell development. Literature regarding the anesthetic management of these cases is limited. We present 2 cases of Shah–Waardenburg syndrome and discuss them in the context of review of previously published cases.

Waardenburg syndrome (WS) type I is caused by defects at multiple loci, one of which is near ALPP on chromosome 2: first report of the WS consortium.

K M Grundfast,  Ada R S Diehl,  Kevin C. Foy … (1992)
Previous studies have localized the gene for Waardenburg syndrome (WS) type I to the distal portion of chromosome 2q, near the ALPP locus. We pooled linkage data obtained from 41 WS type I and 3 WS type II families which were typed for six polymorphic loci on chromosome 2q in order to refine the location of the WS locus (WS1) and evaluate the extent of genetic heterogeneity. In the course of this work, we developed diagnostic criteria for genetic and phenotypic studies. Our findings, based on two-locus and multilocus analysis using a linkage map established from reference pedigrees, suggest that there are two or more mutations causing WS, one of which (i.e., WS1) is located on chromosome 2q, between the ALPP and FN1 loci, at distances of 7.8 cM and 11.2 cM for each marker, respectively. The results also indicate that WS1 is responsible for the illness in approximately 45% of all families in this sample. However, the odds favoring this position over a location between ALPP and SAG are only 2:1 when alternate assumptions about the proportion of linked families are considered. We conclude that a more saturated map of this region of chromosome 2q, including highly polymorphic markers, will be needed to accurately distinguish linked families and, ultimately, isolate the mutant gene.

Conrad Hodgkinson,  William Donaldson,  Pavel Michalek (2008)
We describe successful fiberoptic-guided tracheal intubation through the novel supraglottic "I-gel" airway in two uncooperative adult patients with genetic syndromes, learning disability, and predicted difficult airway, scheduled for complex dental treatment under general anesthesia. The I-gel maintained the airway immediately after induction, allowing oxygenation and ventilation. Location of the laryngeal inlet was successful on the first attempt with a fiberscope, and the tracheal tube was inserted into the trachea over the endoscope without complication in both patients. This report suggests another option for management of predicted difficult airways.

Michael Wegner,  Ken Inoue,  Hua Yu … (2007)
Peripheral demyelinating neuropathy, central dysmyelinating leukodystrophy, Waardenburg syndrome and Hirschsprung disease (PCWH) is a complex neurocristopathy caused by SOX10 mutations. Most PCWH-associated SOX10 mutations result in premature termination codons (PTCs), for which the molecular mechanism has recently been delineated. However, the first mutation reported to cause PCWH was a disruption of the native stop codon that by conceptual translation extends the protein into the 3' untranslated region (3'-UTR) for an additional 82 residues. In this study, we sought to determine the currently unknown molecular pathology for the SOX10 extension mutation using in vitro functional assays. Despite the wild-type SOX10 coding sequence remaining intact, the extension mutation led to severely diminished transcription and DNA-binding activities. Nevertheless, it showed no dominant-negative interference with wild-type SOX10 in vitro. Within the 82-amino acid tail, an 11-amino acid region (termed the WR domain) was responsible primarily for the deleterious properties of the extension. The WR domain, presumably forming an alpha-helix structure, inhibited SOX10 transcription activities if inserted in the carboxyl-terminal half of the protein. The WR domain can also affect other transcription factors with a graded effect when fused to the carboxyl termini, suggesting that it probably elicits a toxic functional activity. Together, molecular pathology for the SOX10 extension mutation is distinct from that of more common PTC mutations. Failure to properly terminate SOX10 translation causes the generation of a deleterious functional domain that occurs because of translation of the normal 3'-UTR; the mutant fusion protein causes a severe neurological disease.