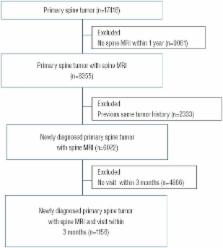 Our study provides a detailed view of the characteristics, medical utilization states, and survival rates of patients newly diagnosed with primary spine tumors in Korea.

Young Yoon,  Gi Park,  Hyonggin An … (2015)
Abstract This study determined the trends in the quantities and patterns of nationwide antibiotic consumption in the Republic of Korea (ROK). This nationwide descriptive epidemiological study was conducted in the ROK between 2008 and 2012. The quantities and patterns of total systemic antibiotic prescriptions were analyzed using National Health Insurance claims data collected through the Health Insurance Review and Assessment service. Data concerning systemic antibiotics were collected using measurement units of the defined daily dose (DDD) per 1000 people per day according to the Anatomical Therapeutic Chemical classification. Over the 5-year study period, the annual consumption of systemic antibiotics ranged from 21.68 to 23.12 DDD per 1000 people per day. Outpatient antibiotic use accounted for 80.9% of total consumption. A regression model with autoregressive errors showed significant increased consumption of major antibiotic subgroups, including 3rd-generation cephalosporins, carbapenems, and glycopeptides (P < 0.001). However, the antibiotic use of 1st- (P = 0.003), 2nd- (P = 0.004), and 3rd-generation (P = 0.018) cephalosporins among patients who underwent surgery under monitoring by the antimicrobial stewardship programs for perioperative prescription was significantly lower than in those who underwent surgery without monitoring programs. In time-series analysis, total antibiotic consumption demonstrated significant seasonality (P < 0.001). The consumption of broad-spectrum antibiotics was noted to have increased in the ROK from 2008 to 2012, providing a possible explanation for the changing epidemiology of multidrug resistance. Larger prospective studies are needed to investigate the impact on public health of monitoring programs of perioperative antibiotic usage.

Seil Sohn and Jinhee Kim contributed equally to this work.