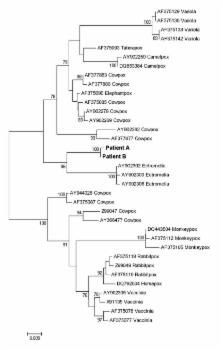 Bookmark
There is no author summary for this article yet. Authors can add summaries to their articles on ScienceOpen to make them more accessible to a non-specialist audience.
To the Editor: Kurth et al ( 1 ) recently described a cowpoxvirus chain of transmission from rat to human through an elephant in Germany. Zoonotic cowpoxvirus infections are well known in Europe ( 2 , 3 ). This virus can infect many animal species; serologic evidence of infection may approach 10% in cats in western Europe ( 4 , 5 ). Zoonotic orthopoxvirus (OPV) infection has been reported in several European countries, but it is rare south of the Alps, and no extensive description of cases is available for Italy. We describe 2 cases of zoonotic OPV in Friuli, northeastern Italy, in veterinary personnel scratched by cats. In December 2005, a male veterinary student (patient A) who had been scratched by a cat with multiple cutaneous ulcerated lesions sought care at a local hospital; he had a lesion on his right hand, moderate fever, and malaise. Histopathologic findings from the cat indicated feline poxvirus infection. In July 2007, a female veterinarian (patient B) who lived in a different area of the same region and also had been scratched by a cat, sought care at the same hospital; she had a lesion close to the right sternoclavicular joint. On the basis of patients’ history of exposure and clinical presentation of the animals’ disease, zoonotic transmission of OPV infection was suspected. Vesicle fluid and, subsequently, crusts from the patients’ lesions, were sent to the virology laboratory of the reference center for poxvirus infections at National Institute for Infectious Diseases in Rome, where OPV diagnosis was based on electron microscopy, virus isolation, and detection of viral nucleic acid. In addition, serial blood samples were sent to the same laboratory for analysis of specific antibodies and cellular immune response. The viruses were almost identical, according to the partial sequence of the crmB gene (EF612710 and FJ445748) and on the complete sequence of the hemagglutinin gene (EF612709 and FJ445747). The hemagglutinin (Figure) and the partial crmB (not shown) sequences from each isolate formed a distinct cluster within the OPV genus; similar results were obtained from concatenated analysis of both genes (not shown). The identity/similarity scores of the complete nucleotide sequences of crmB and hemagglutinin genes from patient A, in relation to other OPVs, were, respectively, Ectromelia (AF012825), 0.598 and 0.841; cowpox (X94355), 0.933 and 0.927; vaccinia (AY678276), 0.844 and 0.934; camelpox (AY009086), 0.941 and 0.940; monkeypox (DQ011153), 0.909 and 0.914; and variola (DQ437588), 0.922 and 0.906. On the basis of these results, species assignment of the isolated OPVs was not possible. Preliminary sequence data on additional genes (ATI, A27L, and CBP) from patient A’s isolate supported the segregation of these OPVs in Italy from the other known OPV species. However, the available information is still not enough to infer whether the isolates from Italy belong to a novel or known OPV species. More extensive biologic and molecular characterization is in progress. Figure Phylogenetic tree of nucleotide sequences of the complete hemagglutinin open reading frame (930 bp) of orthopoxviruses (OPVs) isolated from the 2 patients described in this report and additional poxviruses available in GenBank (cowpox: AY902279, AY902269, AF375085, AF377883, AF377886, AY902262, AY944028, Z99047, AY366477, AF377877, AF375087; taterapox: AF375093; camelpox: AY902250, DQ853384; horsepox: DQ792504; elephantpox: AF375090; vaccinia: AY902305, X91135, AF375078, AF375077; rabbitpox: AF375119, AF375118, Z99049; variola: AF375129, AF375130, AF375138, AF375142; ectromelia: AY902302, AY902303, AY902306; monkeypox: DQ443504, AF375105, AF375112). Multiple alignment was generated with ClustalW 1.7 software in BioEdit (www.mbio.ncsu.edu/BioEdit/BioEdit.html), and the phylogenetic tree was constructed by using maximum-likelihood and neighbor-joining algorithms implemented in Mega 4.0 software (www.megasoftware.net). Bootstrap values >75 are shown at nodes. The sequences from the patients described in this report form a distinct cluster separate from other OPV sequences. Scale bar indicates genetic distance. The 2 cases reported here, occurring >1 year apart, indicate that OPV is circulating in domestic, and possibly wild, local fauna; they underscore the need for physicians and veterinarians to become aware of the risk for OPV zoonoses. A surveillance program has been launched among local veterinary clinics to identify nonvaccinated veterinarians who have been exposed to OPV. A surveillance plan for cats at these clinics has also been started.

Benjamin H Meyer,  Sarah M. Hazel,  Grant W. Montgomery … (1999)
It is generally accepted that the reservoir hosts of cowpox virus are wild rodents, although direct evidence for this is lacking for much of the virus's geographic range. Here, through a combination of serology and PCR, we demonstrate conclusively that the main hosts in Great Britain are bank voles, wood mice and short-tailed field voles. However, we also suggest that wood mice may not be able to maintain infection alone, explaining the absence of cowpox from Ireland where voles are generally not found. Infection in wild rodents varies seasonally, and this variation probably underlies the marked seasonal incidence of infection in accidental hosts such as humans and domestic cats.

Cowpox infection causing a generalized eruption in a patient with atopic dermatitis.

David Roberts,  J. Thomas,  S Blackford (1993)
We report a patient with a history of atopic dermatitis who developed a generalized eruption due to cowpox infection. The infection was probably acquired from the patient's cat. This is the first report from Britain of cowpox causing Kaposi's varicelliform eruption in a patient with atopic dermatitis.

Generalized fatal Cowpox virus infection in a cat with transmission to a human contact case.

A Hlinak,  C Czerny,  Kurt Hoffmann … (2006)
A 4-month-old female domestic shorthair cat was infected by a virus of the Poxvirus family. The animal developed a severe pneumonia and generalized ulcerating lesions of the skin. Histologically, typical eosinophilic intracytoplasmic inclusion bodies indicative of an Orthopoxvirus (OPV) infection were present. The lung showed grey-white to haemorrhagic nodular lesions with a central zone of complete necrosis of alveolar and bronchial tissue. Electron microscopy from skin and lung nodules revealed typical square-shaped OPV particles. Cultivation of the virus on chorio-allantoic membranes of embryonated chicken eggs resulted in haemorrhagic plaques. Restriction enzyme analysis, PCR and sequencing of the D8L gene identified the OPV isolate as a typical Cowpox virus. It was transmitted by the cat to a human contact person who developed a local nodular dermatitis at the inoculation site in association with signs of general infection and had an increase of OPV-specific neutralizing antibodies in paired serum samples.