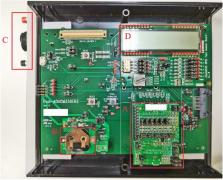 An on-chip transducer, for monitoring noninvasively the insulin bio-availability in real time after administration in clinical diabetology, is proposed. The bioavailability is assessed as insulin decrease in situ after administration by means of local impedance measurement. Inter-and-intra individual reproducibility is enhanced by a personalized model, specific for the subject, identified and validated during each insulin administration. Such a real-time noninvasive bioavailability measurement allows to increase the accuracy of insulin bolus administration, by attenuating drawbacks of glycemic swings significantly. In the first part of this paper, the concept, the architecture, and the operation of the transducer, as well as details about its prototype, are illustrated. Then, the metrological characterization and validation are reported in laboratory, in vitro on eggplants, ex vivo on pig abdominal non-perfused muscle, and in vivo on a human subject, using injection as a reference subcutaneous delivery of insulin. Results of significant intra-individual reproducibility in vitro and ex vivo point out noteworthy scenarios for assessing insulin bioavailability in clinical diabetology.

Comparison of human skin or epidermis models with human and animal skin in in-vitro percutaneous absorption.

Fritz P. Schmook,  Josef Meingassner,  Andreas Billich (2001)
For the study of in-vitro skin penetration of candidate drugs, excised animal skin is frequently used as a replacement for human skin. Reconstructed human skin or epidermis equivalents have been proposed as alternatives. We compared the penetration properties of human, pig and rat skin with the Graftskin LSE (living skin equivalent) and the Skinethic HRE (human reconstructed epidermis) models using four topical dermatological drugs (salicylic acid, hydrocortisone, clotrimazole and terbinafine) with widely varying polarity. In agreement with published data, pig skin appeared as the most suitable model for human skin: the fluxes through the skin and concentrations in the skin were of the same order of magnitude for both tissues, with differences of at most two- or fourfold, respectively. Graftskin LSE provided an adequate barrier to salicylic acid, but was very permeable for the more hydrophobic compounds (e.g. about 900-fold higher flux and 50-fold higher skin concentrations of clotrimazole as compared to human skin), even more than rat skin. In the case of the Skinethic HRE, we found similar concentrations of salicylic acid as in human skin and an approximately sevenfold higher flux. In contrast, the permeation of hydrophobic compounds through the epidermal layer was vastly higher than through split-thickness human skin (up to a factor of about 800). To conclude, currently available reconstituted skin models cannot be regarded as generally useful for in-vitro penetration studies.

Biophysical study of porcine ear skin in vitro and its comparison to human skin in vivo.

N Sekkat,  Yogeshvar N. Kalia,  R. Kiplin Guy (2002)
The goal of this work was to establish, using biophysical characterization, that porcine ear skin in vitro is a valid model for its human counterpart. Specifically, stratum corneum (SC) barrier function was evaluated during its progressive removal by adhesive tape-stripping using the techniques of transepidermal water loss (TEWL) and impedance spectroscopy. TEWL increased slowly at first and then more rapidly with the degree of SC impairment. In contrast, low-frequency skin impedance declined exponentially as a function of progressive SC removal. The methods provide complementary and correlated information about SC barrier function. Biophysical parameters, including the diffusivity and permeability coefficient of water across the SC, and the thickness of the barrier were determined from the TEWL data using Fick's first law of diffusion. Furthermore, an ionic partition coefficient-mobility product was estimated from the skin impedance measurements. Comparison of the results with those previously reported for human skin in vivo strongly supports the validity of the porcine membrane as an in vitro model. Copyright 2002 Wiley-Liss, Inc. and the American Pharmaceutical Association J Pharm Sci 91:2376-2381, 2002

Open Access This article is licensed under a Creative Commons Attribution 4.0 International License, which permits use, sharing, adaptation, distribution and reproduction in any medium or format, as long as you give appropriate credit to the original author(s) and the source, provide a link to the Creative Commons license, and indicate if changes were made. The images or other third party material in this article are included in the article's Creative Commons license, unless indicated otherwise in a credit line to the material. If material is not included in the article's Creative Commons license and your intended use is not permitted by statutory regulation or exceeds the permitted use, you will need to obtain permission directly from the copyright holder. To view a copy of this license, visit http://creativecommons.org/licenses/by/4.0/.