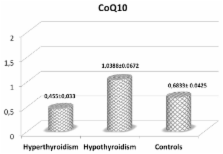 In previous works we demonstrated an inverse correlation between plasma Coenzyme Q 10 (CoQ 10) and thyroid hormones; in fact, CoQ 10 levels in hyperthyroid patients were found among the lowest detected in human diseases. On the contrary, CoQ 10 is elevated in hypothyroid subjects, also in subclinical conditions, suggesting the usefulness of this index in assessing metabolic status in thyroid disorders. A Low-T3 syndrome is a condition observed in several chronic diseases: it is considered an adaptation mechanism, where there is a reduction in pro-hormone T4 conversion. Low T3-Syndrome is not usually considered to be corrected with replacement therapy. We review the role of thyroid hormones in regulation of antioxidant systems, also presenting data on total antioxidant capacity and Coenzyme Q 10. Published studies suggest that oxidative stress could be involved in the clinical course of different heart diseases; our data could support the rationale of replacement therapy in low-T3 conditions.

B Khaw,  U Schmidt,  T DiSalvo … (1996)
Heart failure can result from a variety of causes, including ischemic, hypertensive, toxic, and inflammatory heart disease. However, the cellular mechanisms responsible for the progressive deterioration of myocardial function observed in heart failure remain unclear and may result from apoptosis (programmed cell death). We examined seven explanted hearts obtained during cardiac transplantation for evidence of apoptosis. All seven patients had severe chronic heart failure: four had idiopathic dilated cardiomyopathy, and three had ischemic cardiomyopathy. DNA fragmentation (an indicator of apoptosis) was identified histochemically by in situ end-labeling as well as by agarose-gel electrophoresis of end-labeled DNA. Myocardial tissues obtained from four patients who had had a myocardial infarction one to two days previously were used as positive controls, and heart tissues obtained from four persons who died in motor vehicle accidents were used as negative controls for the end-labeling studies. Hearts from all four patients with idiopathic dilated cardiomyopathy and from one of the three patients with ischemic cardiomyopathy had histochemical evidence of DNA fragmentation. All four myocardial samples from patients with dilated cardiomyopathy also demonstrated DNA laddering, a characteristic of apoptosis, whereas this was not seen in any of the samples from patients with ischemic cardiomyopathy. Histological evidence of apoptosis was also observed in the central necrotic zone of acute myocardial infarcts, but not in myocardium remote from the infarcted zone. Rare isolated apoptotic myocytes were seen in the myocardium from the four persons who died in motor vehicle accidents. Loss of myocytes due to apoptosis occurs in patients with end-stage cardiomyopathy and may contribute to progressive myocardial dysfunction.

F. Crane (2001)
Coenzyme Q is well defined as a crucial component of the oxidative phosphorylation process in mitochondria which converts the energy in carbohydrates and fatty acids into ATP to drive cellular machinery and synthesis. New roles for coenzyme Q in other cellular functions are only becoming recognized. The new aspects have developed from the recognition that coenzyme Q can undergo oxidation/reduction reactions in other cell membranes such as lysosomes. Golgi or plasma membranes. In mitochondria and lysosomes, coenzyme Q undergoes reduction/oxidation cycles during which it transfers protons across the membrane to form a proton gradient. The presence of high concentrations of quinol in all membranes provides a basis for antioxidant action either by direct reaction with radicals or by regeneration of tocopherol and ascorbate. Evidence for a function in redox control of cell signaling and gene expression is developing from studies on coenzyme Q stimulation of cell growth, inhibition of apoptosis, control of thiol groups, formation of hydrogen peroxide and control of membrane channels. Deficiency of coenzyme Q has been described based on failure of biosynthesis caused by gene mutation, inhibition of biosynthesis by HMG coA reductase inhibitors (statins) or for unknown reasons in ageing and cancer. Correction of deficiency requires supplementation with higher levels of coenzyme Q than are available in the diet.

Helen Prior,  G Cao (1999)
Several methods have been developed to measure the total antioxidant capacity of a biological sample. The use of peroxyl or hydroxyl radicals as pro-oxidants in the oxygen radical absorbance capacity (ORAC) assay makes it different and unique from the assays that involve oxidants that are not necessarily pro-oxidants. An improvement in quantitation is achieved in the ORAC assay by taking the reaction between substrate and free radicals to completion and using an area-under-curve technique for quantitation compared to the assays that measure a lag phase. The interpretation of the changes in plasma or serum antioxidant capacity becomes complicated by the different methods used in detecting these changes. The interpretation also depends upon the conditions under which the antioxidant capacity is determined because the measurement reflects outcomes in a dynamic system. An increased antioxidant capacity in plasma or serum may not necessarily be a desirable condition if it reflects a response to increased oxidative stress. Similarly, a decrease in plasma or serum antioxidant capacity may not necessarily be an undesirable condition if the measurement reflects decreased production of reactive species. Because of these complications, no single measurement of antioxidant status is going to be sufficient, but a "battery" of measurements, many of which will be described in Forum articles, will be necessary to adequately assess oxidative stress in biological systems.