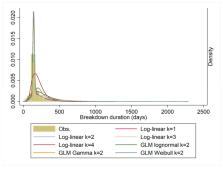 Bovine tuberculosis (bTB) outbreaks, caused by Mycobacterium bovis infection, are a costly animal health challenge. Understanding factors associated with the duration of outbreaks, known as breakdowns, could lead to better disease management policy development. We undertook a retrospective observational study (2012–2018) and employed Finite Mixture Models (FMM) to model the outcome parameter, and to investigate how factors were associated with duration for differing subpopulations identified. In addition to traditional risk factors (e.g., herd size, bTB history), we also explored farm geographic area, parcels/farm fragmentation, metrics of intensity via nitrogen loading, and whether herds were designated controlled beef finishing units (CBFU) as potential risk factors for increased duration. The final model fitted log-normal distributions, with two latent classes (k) which partitioned the population into a subpopulation around the central tendency of the distribution, and a second around the tails of the distribution. The latter subpopulation included longer breakdowns of policy interest. Increasing duration was positively associated with recent (<3 years) TB history and the number of reactors disclosed, (log) herd size, beef herd-type relative to other herd types, number of land parcels, area, being designated a CBFU (“feedlot”) and having high annual inward cattle movements within the “tails” subpopulation. Breakdown length was negatively associated with the year of commencement of breakdown (i.e., a decreasing trend) and non-significantly with the organic nitrogen produced on the farm (N kg/hectare), a measure of stocking density. The latter finding may be due to confounding effects with herd size and area. Most variables contributed only moderately to explaining variation in breakdown duration, that is, they had moderate size effects on duration. Herd-size and CBFU had greater effect sizes on the outcome. The findings contribute to evidence-based policy formation in Ireland.

J. F. Mitchell,  J Mawdsley,  Nigel A D Bourn … (2005)
For 20 years, bovine tuberculosis (BTB) has been spreading in Great Britain (England, Wales and Scotland) and is now endemic in the southwest and parts of central England and in southwest Wales, and occurs sporadically elsewhere. Although its transmission pathways remain poorly understood, the disease's distribution was previously modelled statistically by using environmental variables and measures of their seasonality. Movements of infected animals have long been considered a critical factor in the spread of livestock diseases, as reflected in strict import/export regulations, the extensive movement restrictions imposed during the 2001 foot-and-mouth disease outbreak, the tracing procedures after a new case of BTB has been confirmed and the Government's recently published strategic framework for the sustainable control on BTB. Since January 2001 it has been mandatory for stock-keepers in Great Britain to notify the British Cattle Movement Service of all cattle births, movements and deaths. Here we show that movements as recorded in the Cattle Tracing System data archive, and particularly those from areas where BTB is reported, consistently outperform environmental, topographic and other anthropogenic variables as the main predictor of disease occurrence. Simulation distribution models for 2002 and 2003, incorporating all predictor categories, are presented and used to project distributions for 2004 and 2005.

Progress in the control of bovine tuberculosis in Spanish wildlife.

Christian Gortazar,  Joaquín Vicente,  Mariana Boadella … (2011)
Despite the compulsory test and slaughter campaigns in cattle, bovine tuberculosis (bTB) is still present in Spain, and the role of wildlife reservoirs is increasingly recognized. We provide an update on recent progress made in bTB control in Spanish wildlife, including aspects of epidemiology, surveillance, host-pathogen interaction and wildlife vaccination. At the high densities and in the particular circumstances of Mediterranean environments, wild ungulates, mainly Eurasian wild boar and red deer, are able to maintain Mycobacterium bovis circulation even in absence of domestic livestock. Infection is widespread among wild ungulates in the south of the country, local infection prevalence being as high as 52% in wild boar and 27% in red deer. Risk factors identified include host genetic susceptibility, abundance, spatial aggregation at feeders and waterholes, scavenging, and social behaviour. An increasing trend of bTB compatible lesions was reported among wild boar and red deer inspected between 1992 and 2004 in Southwestern Spain. Sporadic cases of badger TB have been detected, further complicating the picture. Gene expression profiles were characterized in European wild boar and Iberian red deer naturally infected with M. bovis. The comparative analysis of gene expression profiles in wildlife hosts in response to infection advanced our understanding of the molecular mechanisms of infection and pathogenesis, revealed common and distinctive host responses to infection and identified candidate genes associated with resistance to bTB and for the characterization of host response to infection and vaccination. Ongoing research is producing valuable knowledge on vaccine delivery, safety and efficacy issues. Baits for the oral delivery of BCG vaccine preparations to wild boar piglets were developed and evaluated. The use of selective feeders during the summer was found to be a potentially reliable bait-deployment strategy. Safety experiments yielded no isolation of M. bovis BCG from faeces, internal organs at necropsy and the environment, even after oral delivery of very high doses. Finally, preliminary vaccination and challenge experiments suggested that a single oral BCG vaccination may protect wild boar from infection by a virulent M. bovis field strain. Copyright © 2011 Elsevier B.V. All rights reserved.

Robin Skuce,  Adrian Allen,  Stanley McDowell (2012)
Bovine tuberculosis (TB), caused by Mycobacterium bovis, is one of the most challenging endemic diseases currently facing government, the veterinary profession, and the farming industry in the United Kingdom and Ireland and in several other countries. The disease has a notoriously complex epidemiology; the scientific evidence supports both cattle-cattle and wildlife-cattle transmission routes. To produce more effective ways of reducing such transmission, it is important to understand those risk factors which influence the presence or absence of bovine TB in cattle herds. Here we review the literature on herd-level risk factor studies. Whilst risk factors operate at different scales and may vary across regions, epidemiological studies have identified a number of risk factors associated with bovine TB herd breakdowns, including the purchase of cattle, the occurrence of bovine TB in contiguous herds, and/or the surrounding area as well as herd size. Other factors identified in some studies include farm and herd management practices, such as, the spreading of slurry, the use of certain housing types, farms having multiple premises, and the use of silage clamps. In general, the most consistently identified risk factors are biologically plausible and consistent with known transmission routes involving cattle-cattle and wildlife-cattle pathways.