Comparison of zero-profile anchored spacer versus plate-cage construct in treatment of cervical spondylosis with regard to clinical outcomes and incidence of major complications: a meta-analysis 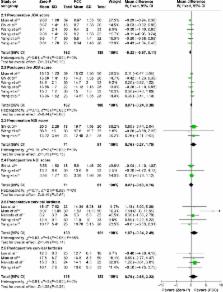 Meta-analysis was conducted to evaluate whether zero-profile anchored spacer (Zero-P) could reduce complication rates, while maintaining similar clinical outcomes compared to plate-cage construct (PCC) in the treatment of cervical spondylosis.

All prospective and retrospective comparative studies published up to May 2015 that compared the clinical outcomes of Zero-P versus PCC in the treatment of cervical spondylosis were acquired by a comprehensive search in PubMed and EMBASE. Exclusion criteria were non-English studies, noncomparative studies, hybrid surgeries, revision surgeries, and surgeries with less than a 12-month follow-up period. The main end points including Japanese Orthopedic Association (JOA) and Neck Disability Index (NDI) scores, cervical lordosis, fusion rate, subsidence, and dysphagia were analyzed. All studies were analyzed with the RevMan 5.2.0 software. Publication biases of main results were examined using Stata 12.0.

Our meta-analysis suggested that surgical treatments of single or multiple levels of cervical spondylosis using Zero-P and PCC were similar in terms of JOA score, NDI score, cervical lordosis, and fusion rate. Although the Zero-P group had a higher subsidence rate than the PCC group, Zero-P had a lower postoperative dysphagia rate and might have a lower adjacent-level ossification rate.

Jung Yoo,  Michael Lee,  Rajesh Bazaz (2002)
A prospective longitudinal study was conducted to evaluate dysphagia after anterior cervical spine surgery. To evaluate the incidence and natural history of dysphagia after anterior cervical spine surgery, and to identify risk factors for the development of postoperative dysphagia. The literature contains only retrospective evaluations of postoperative dysphagia. A wide range of incidence has been reported in these studies. Altogether, 249 consecutive patients undergoing anterior cervical spine surgery were eligible for the study. These patients were contacted 1, 2, 6, and 12 months after the procedure to evaluate swallowing. Risk factors such as age, gender, procedure type, hardware use, and number and location of surgical levels addressed were assessed. Dysphagia incidences of 50.2%, 32.2%, 17.8%, and 12.5% were found at 1, 2, 6, and 12 months, respectively. At 6 months after the procedure, only 4.8% of the patients were experiencing moderate or severe dysphagia. Patient age, type of procedure (corpectomy vs. discectomy or primary vs. revision), hardware presence, and location of surgical levels were not statistically significant risk factors for the development of postoperative dysphagia. Female gender was significant for increased risk of dysphagia at 6 months. Surgery at multiple disc levels increased the risk of postoperative dysphagia at 1 and 2 months. The etiology of the dysphagia in most of the patients was unknown. However, vocal cord paresis was identified in 1.3% of the patients at 12 months. Dysphagia after anterior cervical spine surgery is a common early finding. However, it decreases significantly by 6 months. The minority of patients experience moderate or severe symptoms by 6 months after the procedure. Female gender and multiple surgical levels could be identified as risk factors for the development of postoperative dysphagia.

Comparison of titanium and polyetheretherketone (PEEK) cages in the surgical treatment of multilevel cervical spondylotic myelopathy: a prospective, randomized, control study with over 7-year follow-up.

Deyu Chen,  Haisong Yang,  Xuhua Lu … (2013)
Anterior cervical discectomy and fusion (ACDF) with titanium- or polyetheretherketone (PEEK)-cage reconstruction is widely used in the treatment of cervical spondylotic myelopathy (CSM). This study was to compare outcomes of titanium and PEEK cages in the treatment of multilevel CSM. Between November 2002 and December 2004, a total of 80 patients with 3-level CSM were randomized in a 1:1 ratio to titanium group and PEEK group. The overall follow-up period of the patients ranged from 86 to 116 months (average 99.7 months). Clinical and radiological results were compared between titanium group and PEEK group. At the final follow-up, the clinical outcomes including JOA score, NDI score, and the excellent and good rates of clinical outcomes in the PEEK group were better than those in the titanium group. More loss of the Cobb angles and the intervertebral height was observed in the titanium group, resulting in the radiological parameters in the titanium group becoming inferior to the PEEK group at the final follow-up. Cage subsidence rates were 34.5 and 5.4% in the titanium and PEEK groups, respectively. Fusion was observed in all patients of two groups at the final follow-up. Two patients presented with cage dislocation without clinical symptoms in the titanium group. In surgical treatment of multilevel CSM, PEEK cage is superior to titanium cage in maintenance of intervertebral height and cervical lordosis, resulting in better clinical outcomes in the long-term follow-up.

B. Lee,  Eun Yoo,  Raj Bazaz … (2005)
To compare the incidence, prevalence, and rate of improvement of dysphagia in patients undergoing anterior cervical spine surgery with two different anterior instrumentation designs. The study subjects were 156 consecutive patients undergoing anterior cervical spine surgery with plate fixation. We compared the incidence of dysphagia among the two different plate groups both produced by the same manufacturer (Medtronic Danek); the Atlantis plate has thicker and wider plate dimensions than the Zephir plate. Dysphagia evaluations were performed prospectively by telephone interviews at 1, 2, 6, 12, and 24 months following the procedure. Risk factors such as gender, revision surgery, and number of surgical levels were compared between the groups and were not statistically different. Overall incidences of dysphagia were 49%, 37%, 20%, 15.4%, and 11% at 1, 2, 6, 12, and 24 months, respectively. Severe and disabling dysphagia is reported to be a relatively uncommon complication of anterior cervical surgery. However, a significant number of patients report mild to moderate discomfort including double-swallowing and catching sensation. Except at the 2-month follow-up point, the Atlantis plate group had higher incidences of dysphagia than the Zephir group at all time points (57% vs 50%, 36% vs 4%, 23% vs 14%, 17% vs 7%, 14% vs 0% at 1, 2, 6, 12, and 24 months, respectively). The Atlantis plate group had a 14% incidence of dysphagia at 2 years compared with the Zephir group, which had a 0% incidence at 2 years (P < 0.04). For primary surgeries, there was a higher incidence of dysphagia at all time points in the Atlantis group when compared with the Zephir group (58% vs 43%, 35% vs 30%, 22% vs 10%, 17% vs 0%, and 13% vs 0% at 1, 2, 6, 12, and 24 months, respectively) (P < 0.04 at 1 year). A regression analysis was performed. The resulting formulas predict the permanent rate of dysphagia for the Atlantis group is 13.6% and for the Zephir group is 3.58%. The use of a smaller and smoother profile plate such as the Zephir does reduce the incidence of dysphagia as compared with a slightly larger and less smooth plate such as the Atlantis.