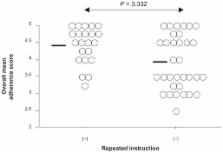 A cross-sectional analysis of 88 COPD patients was performed using a self-reported adherence questionnaire with responses on a 5-point Likert scale.

Of the 88 patients who were potential participants, 55 (63%) responded with usable information. The only significant factor associated with the overall mean adherence score was receiving repeated instruction about inhalation techniques ( P = 0.032). Of the 55 respondents, 22 (40.0%) were given repeated verbal instruction and/or demonstrations of inhalation technique by a respiratory physician. Significant correlations were found between the overall mean adherence score and the health-related quality of life score (St George’s Respiratory Questionnaire: total, r = −0.35, P = 0.023; symptoms, r = −0.43, P = 0.002; impacts, r = −0.35, P = 0.011). Furthermore, patients with repeated instruction showed better quality of life scores than those who did not receive instruction (total, P = 0.030; symptoms, P = 0.038; impacts, P = 0.019).

Repeated instruction for inhalation techniques may contribute to adherence to therapeutic regimens, which relates to better health status in COPD.

Assessment of handling of inhaler devices in real life: an observational study in 3811 patients in primary care.

M. Molimard,  S Lignot,  A. Abouelfath … (2002)
The correct use of inhalation devices is an inclusion criterion for all studies comparing inhaled treatments. In real life, however, patients may make many errors with their usual inhalation device, which may negate the benefits observed in clinical trials. Our study was undertaken to compare inhalation device handling in real life. A total of 3811 patients treated for at least 1 month with an inhalation device (Aerolizer, Autohaler, Diskus, pressurized metered dose inhaler (pMDI), or Turbuhaler) were included in this observational study performed in primary care in France between February 1st and July 14th, 2002. General practitioners had to assess patient handling of their usual inhaler device with the help of a checklist established for each inhaler model, from the package leaflet. Seventy-six percent of patients made at least one error with pMDI compared to 49-55% with breath-actuated inhalers. Errors compromising treatment efficacy were made by 11-12% of patients treated with Aerolizer, Autohaler, or Diskus compared to 28% and 32% of patients treated with pMDI and Turbuhaler, respectively. Overestimation of good inhalation by general practitioners was maximal for Turbuhaler (24%), and lowest for Autohaler and pMDI (6%). Ninety percent of general practitioners felt that participation in the study would improve error detection. These results suggest that there are differences in the handling of inhaler devices in real life in primary care that are not taken into account in controlled studies. There is a need for continued education of prescribers and users in the proper use of these devices to improve treatment efficacy.

S. F. Paul Man,  N R Anthonisen,  Don Sin … (2003)
The care of patients with chronic obstructive pulmonary disease (COPD) has changed radically over the past 2 decades, and novel therapies can not only improve the health status of patients with COPD but also modify its natural course. To systematically review the impact of long-acting bronchodilators, inhaled corticosteroids, nocturnal noninvasive mechanical ventilation, pulmonary rehabilitation, domiciliary oxygen therapy, and disease management programs on clinical outcomes in patients with COPD. MEDLINE and Cochrane databases were searched to identify all randomized controlled trials and systematic reviews from 1980 to May 2002 evaluating interventions in patients with COPD. We also hand searched bibliographies of relevant articles and contacted experts in the field. We included randomized controlled trials that had follow-up of at least 3 months and contained data on at least 1 of these clinical outcomes: health-related quality of life, exacerbations associated with COPD, or death. For pulmonary rehabilitation, we included studies that had a follow-up of at least 6 weeks. Using standard meta-analytic techniques, the effects of interventions were compared with placebo or with usual care. In secondary analyses, the effects of interventions were compared against each other, where possible. Long-acting beta2-agonists and anticholinergics (tiotropium) reduced exacerbation rates by approximately 20% to 25% (relative risk [RR] for long-acting beta2-agonists, 0.79; 95% CI, 0.69-0.90; RR for tiotropium, 0.74; 95% CI, 0.62-0.89) in patients with moderate to severe COPD. Inhaled corticosteroids also reduced exacerbation rates by a similar amount (RR, 0.76; 95% CI, 0.72-0.80). The beneficial effects were most pronounced in trials enrolling patients with FEV1 between 1 L and 2 L. Combining a long-acting beta2-agonist with an inhaled corticosteroid resulted in an approximate 30% (RR, 0.70; 95% CI, 0.62-0.78) reduction in exacerbations. Pulmonary rehabilitation improved the health status of patients with moderate to severe disease, but no material effect was observed on long-term survival or hospitalization rates. Domiciliary oxygen therapy improved survival by approximately 40% in patients with PaO2 lower than 60 mm Hg, but not in those without hypoxia at rest. The data on disease management programs were heterogeneous, but overall no effect was observed on survival or risk of hospitalization. Noninvasive mechanical ventilation was not associated with improved outcomes. A significant body of evidence supports the use of long-acting bronchodilators and inhaled corticosteroids in reducing exacerbations in patients with moderate to severe COPD. Domiciliary oxygen therapy is the only intervention that has been demonstrated to prolong survival, but only in patients with resting hypoxia.

Comparison of discriminative properties among disease-specific questionnaires for measuring health-related quality of life in patients with chronic obstructive pulmonary disease.

T Hajiro,  H Koyama,  T Izumi … (1998)
Three disease-specific, health-related quality of life (HRQL) questionnaires have been introduced to assess patients with chronic obstructive pulmonary disease (COPD): the St. George's Respiratory Questionnaire (SGRQ), the Breathing Problems Questionnaire (BPQ), and the Chronic Respiratory Disease Questionnaire (CRQ). The purpose of the present study was to make comparisons between the SGRQ, the BPQ, and the CRQ in their discriminative properties, and to clarify the characteristics of each questionnaire. One hundred forty-three patients with mild to severe COPD completed pulmonary function tests, progressive cycle ergometer testing for exercise capacity, assessment of dyspnea, anxiety, and depression, and assessment of HRQL. The frequency distributions of the questionnaire scores showed that the SGRQ and the CRQ were normally distributed and that the BPQ was skewed toward low scores. Relationships between all dimensions of the three questionnaires were significant (correlation coefficients [Rs] = 0.74 to 0.86). The three questionnaires had significant but weak correlations (Rs = -0.24 to -0.36) with some physiologic variables (VC, FEV1, and DL(CO)/VA) and mild to moderate correlations with exercise capacity and assessment of dyspnea, anxiety, and depression. Stepwise multiple regression analyses revealed that the Baseline Dyspnea Index (BDI) score, anxiety by the Hospital Anxiety Depression Scale (HAD), and maximal oxygen uptake (VO2max) accounted for 61% of the variance in the SGRQ and that the BDI and anxiety of the HAD accounted for 53 and 49% of the variance in the BPQ and the CRQ, respectively. Dyspnea and psychologic status impacted the HRQL in patients with COPD. Although no substantial differences between the SGRQ, the BPQ, and the CRQ were evident in the correlations with physiologic parameters and the influential factors, the BPQ was found to be less discriminatory than the SGRQ and the CRQ in evaluating HRQL cross-sectionally.