Biosynthesis of Saxitoxin in Marine Dinoflagellates: An Omics Perspective 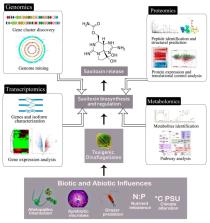 Saxitoxin is an alkaloid neurotoxin originally isolated from the clam Saxidomus giganteus in 1957. This group of neurotoxins is produced by several species of freshwater cyanobacteria and marine dinoflagellates. The saxitoxin biosynthesis pathway was described for the first time in the 1980s and, since then, it was studied in more than seven cyanobacterial genera, comprising 26 genes that form a cluster ranging from 25.7 kb to 35 kb in sequence length. Due to the complexity of the genomic landscape, saxitoxin biosynthesis in dinoflagellates remains unknown. In order to reveal and understand the dynamics of the activity in such impressive unicellular organisms with a complex genome, a strategy that can carefully engage them in a systems view is necessary. Advances in omics technology (the collective tools of biological sciences) facilitated high-throughput studies of the genome, transcriptome, proteome, and metabolome of dinoflagellates. The omics approach was utilized to address saxitoxin-producing dinoflagellates in response to environmental stresses to improve understanding of dinoflagellates gene–environment interactions. Therefore, in this review, the progress in understanding dinoflagellate saxitoxin biosynthesis using an omics approach is emphasized. Further potential applications of metabolomics and genomics to unravel novel insights into saxitoxin biosynthesis in dinoflagellates are also reviewed.

Oliver Fiehn (2001)
Now that complete genome sequences are available for a variety of organisms, the elucidation of gene functions involved in metabolism necessarily includes a better understanding of cellular responses upon mutations on all levels of gene products, mRNA, proteins, and metabolites. Such progress is essential since the observable properties of organisms – the phenotypes – are produced by the genotype in juxtaposition with the environment. Whereas much has been done to make mRNA and protein profiling possible, considerably less effort has been put into profiling the end products of gene expression, metabolites. To date, analytical approaches have been aimed primarily at the accurate quantification of a number of pre-defined target metabolites, or at producing fingerprints of metabolic changes without individually determining metabolite identities. Neither of these approaches allows the formation of an in-depth understanding of the biochemical behaviour within metabolic networks. Yet, by carefully choosing protocols for sample preparation and analytical techniques, a number of chemically different classes of compounds can be quantified simultaneously to enable such understanding. In this review, the terms describing various metabolite-oriented approaches are given, and the differences among these approaches are outlined. Metabolite target analysis, metabolite profiling, metabolomics, and metabolic fingerprinting are considered. For each approach, a number of examples are given, and potential applications are discussed.

Nicolas Vinckenbosch,  Manyuan Long,  Henrik Kaessmann (2008)
Gene copies that stem from the mRNAs of parental source genes have long been viewed as evolutionary dead-ends with little biological relevance. Here we review a range of recent studies that have unveiled a significant number of functional retroposed gene copies in both mammalian and some non-mammalian genomes. These studies have not only revealed previously unknown mechanisms for the emergence of new genes and their functions but have also provided fascinating general insights into molecular and evolutionary processes that have shaped genomes. For example, analyses of chromosomal gene movement patterns via RNA-based gene duplication have shed fresh light on the evolutionary origin and biology of our sex chromosomes.