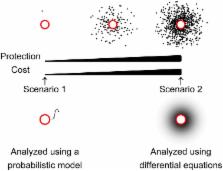 Many strains of bacteria produce antagonistic substances that restrain the growth of others, and potentially give them a competitive advantage. These substances are commonly released to the surrounding environment, involving metabolic costs in terms of energy and nutrients. The rate at which these molecules need to be produced to maintain a certain amount of them close to the producing cell before they are diluted into the environment has not been explored so far. To understand the potential cost of production of antagonistic substances in water environments, we used two different theoretical approaches. Using a probabilistic model, we determined the rate at which a cell needs to produce individual molecules in order to keep on average a single molecule in its vicinity at all times. For this minimum protection, a cell would need to invest 3.92 × 10 −22 kg s −1 of organic matter, which is 9 orders of magnitude lower than the estimated expense for growth. Next, we used a continuous model, based on Fick's laws, to explore the production rate needed to sustain minimum inhibitory concentrations around a cell, which would provide much more protection from competitors. In this scenario, cells would need to invest 1.20 × 10 −11 kg s −1, which is 2 orders of magnitude higher than the estimated expense for growth, and thus not sustainable. We hypothesize that the production of antimicrobial compounds by bacteria in aquatic environments lies between these two extremes.

Tracy J. Mincer,  Benjamin Kirkup,  Sarah Proehl … (2012)
In animals and plants, social structure can reduce conflict within populations and bias aggression toward competing populations; however, for bacteria in the wild it remains unknown whether such population-level organization exists. Here, we show that environmental bacteria are organized into socially cohesive units in which antagonism occurs between rather than within ecologically defined populations. By screening approximately 35,000 possible mutual interactions among Vibrionaceae isolates from the ocean, we show that genotypic clusters known to have cohesive habitat association also act as units in terms of antibiotic production and resistance. Genetic analyses show that within populations, broad-range antibiotics are produced by few genotypes, whereas all others are resistant, suggesting cooperation between conspecifics. Natural antibiotics may thus mediate competition between populations rather than solely increase the success of individuals.

The pyocins of Pseudomonas aeruginosa.

Yvon Michel-Briand,  Christine Baysse (2015)
Pyocins are produced by more than 90% of Pseudomonas aeruginosa strains and each strain may synthesise several pyocins. The pyocin genes are located on the P. aeruginosa chromosome and their activities are inducible by mutagenic agents such as mitomycin C. Three types of pyocins are described. (i). R-type pyocins resemble non-flexible and contractile tails of bacteriophages. They provoke a depolarisation of the cytoplasmic membrane in relation with pore formation. (ii). F-type pyocins also resemble phage tails, but with a flexible and non-contractile rod-like structure. (iii). S-type pyocins are colicin-like, protease-sensitive proteins. They are constituted of two components. The large component carries the killing activity (DNase activity for pyocins S1, S2, S3, AP41; tRNase for pyocin S4; channel-forming activity for pyocin S5). It interacts with the small component (immunity protein). The synthesis of pyocins starts when a mutagen increases the expression of the recA gene and activates the RecA protein, which cleaves the repressor PrtR, liberating the expression of the protein activator gene prtN. R and F-pyocins are derived from an ancestral gene, with similarities to the P2 phage family and the lambda phage family, respectively. The killing domains of S1, S2, AP41 pyocins show a close evolutionary relationship with E2 group colicins, S4 pyocin with colicin E5, and S5 pyocin with colicins Ia, and Ib.

This article was submitted to Microbial Symbioses, a section of the journal Frontiers in Microbiology