COPD uncovered: a cross-sectional study to assess the socioeconomic burden of COPD in Japan 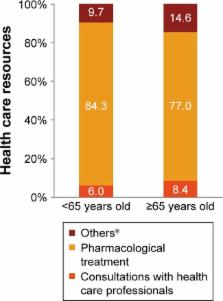 COPD remains a major health problem in Japan. Patients with COPD experience a reduced quality of life (QoL) and have a higher chance of work impairment and productivity loss. However, there is a lack of data on the impact of COPD in terms of QoL and work activity impairment in Japan. This study assessed the socioeconomic burden of COPD in Japan and the impact it may have on the working age population.

This was a 2-year retrospective chart review in COPD patients aged ≥40 years, with at least one health care visit to clinic or hospital in the previous 12 months. Patients were required to have available medical charts for at least the previous 24 months. Symptoms were assessed using COPD assessment test score; EuroQoL Group 5 Dimension (EQ-5D-5L) and work productivity and activity impairment general health questionnaires were used to evaluate health-related QoL and work productivity, and health care resource utilization data were obtained from clinical charts.

Yasuyuki Nasuhara,  Satoshi Fuke,  Satoshi Konno … (2012)
Although the rate of annual decline in FEV1 is one of the most important outcome measures in chronic obstructive pulmonary disease (COPD), little is known about intersubject variability based on clinical phenotypes. To examine the intersubject variability in a 5-year observational cohort study, particularly focusing on emphysema severity. A total of 279 eligible patients with COPD (stages I-IV: 26, 45, 24, and 5%) participated. We conducted a detailed assessment of pulmonary function and computed tomography (CT) at baseline, and performed spirometry every 6 months before and after inhalation of bronchodilator. Smoking status, exacerbation, and pharmacotherapy were carefully monitored. Emphysema severity was evaluated by CT and annual measurements of carbon monoxide transfer coefficient. Using mixed effects model analysis, the annual decline in post-bronchodilator FEV1 was -32±24 (SD) ml/yr (n=261). We classified the subjects of less than the 25th percentile as Rapid decliners, the 25th to 75th percentile as Slow decliners, and greater than the 75th percentile as Sustainers (-63±2, -31±1, and -2±1 [SE] ml/yr). Emphysema severity, but not %FEV1, showed significant differences among the three groups. Multiple logistic regression analysis demonstrated that the Rapid decliners were independently associated with emphysema severity assessed either by CT or carbon monoxide transfer coefficient. The Sustainers displayed less emphysema and higher levels of circulating eosinophils. Emphysema severity is independently associated with a rapid annual decline in FEV1 in COPD. Sustainers and Rapid decliners warrant specific attention in clinical practice.

Characterisation of phenotypes based on severity of emphysema in chronic obstructive pulmonary disease.

Masaru Hasegawa,  Yuya Onodera,  Hironi Makita … (2007)
Airflow limitation in chronic obstructive pulmonary disease (COPD) is caused by a mixture of small airway disease and emphysema, the relative contributions of which may vary among patients. Phenotypes of COPD classified purely based on severity of emphysema are not well defined and may be different from the classic phenotypes of "pink puffers" and "blue bloaters". To characterise clinical phenotypes based on severity of emphysema, 274 subjects with COPD were recruited, excluding those with physician-diagnosed bronchial asthma. For all subjects a detailed interview of disease history and symptoms, quality of life (QOL) measurement, blood sampling, pulmonary function tests before and after inhalation of salbutamol (0.4 mg) and high-resolution CT scanning were performed. Severity of emphysema visually evaluated varied widely even among subjects with the same stage of disease. No significant differences were noted among three groups of subjects classified by severity of emphysema in age, smoking history, chronic bronchitis symptoms, blood eosinophil count, serum IgE level or bronchodilator response. However, subjects with severe emphysema had significantly lower body mass index (BMI) and poorer QOL scores, evaluated using St George's Respiratory Questionnaire (SGRQ), than those with no/mild emphysema (mean (SD) BMI 21.2 (0.5) vs 23.5 (0.3) kg/m(2), respectively; SGRQ total score 40 (3) vs 28 (2), respectively; p<0.001 for both). These characteristics held true even if subjects with the same degree of airflow limitation were chosen. The severity of emphysema varies widely even in patients with the same stage of COPD, and chronic bronchitis symptoms are equally distributed irrespective of emphysema severity. Patients with the phenotype in which emphysema predominates have lower BMI and poorer health-related QOL.

Use of a preference-based measure of health (EQ-5D) in COPD and asthma.

Knut Stavem,  A Simon Pickard,  Rex Jung … (2008)
EQ-5D is a generic preference-based measure of health that can help to understand the impact of asthma and chronic obstructive pulmonary disease (COPD). The purpose of this paper was to synthesize literature on the validity and reliability of EQ-5D use in studies of asthma and COPD, and estimate EQ-5D utility scores associated with stage of disease. A structured search was conducted in EMBASE and MEDLINE (1988-2007) using keywords relevant to respiratory disease and EQ-5D. Original research studies in asthma or COPD that reported EQ-5D results and/or psychometric properties were included. Studies that reported psychometric properties supported the construct validity, test-retest reliability, and responsiveness of EQ-5D in asthma (seven studies) and COPD (nine studies), although some evidence of ceiling effects were observed in asthma studies. In asthma studies that reported summary scores (n=11), EQ-5D index-based scores ranged from 0.42 (SD 0.30) to 0.93 (SD not reported). In COPD studies (n=8), scores ranged from 0.52 (SD 0.16) to 0.84 (SD 0.15). While few asthma studies reported scores by severity level, sufficient studies in COPD were available to calculate pooled mean utility scores according to GOLD stage: stage I=0.74 (0.62-0.87), stage II=0.74 (0.66-0.83), stage III=0.69 (0.60-0.78) and stage IV=0.61 (0.44-0.77) (most severe). Evidence generally supported the validity and reliability of EQ-5D in asthma and COPD. Utility scores associated with COPD stage may be useful for modeling health outcomes in economic evaluations of treatments for COPD.