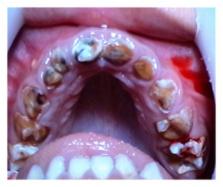 Sanjad-Sakati syndrome (SSS) is a rare genetic disorder with autosomal recessive pattern of inheritance characterized by hypoparathyroidism, sever growth failure, mental retardation, susceptibility to chest infection, and dentofacial anomalies. A child with SSS was referred to the dental departmentseeking dental help for sever dental caries which was attributed to his dietary habits and quality of dental tissues. Full restorative rehabilitation was done under general anesthesia. Two years later, the child presented with recurrent caries affecting uncrowned teeth. High carries recurrence rate was blamed for the nutritional habits endorsed by the parents. Only steel crowned teeth survived such hostile oral environment which suggested shifting of treatment strategy towards full coverage restorations instead of classical cavity preparations and fillings during a second attempt for dental treatment under general anesthesia and for the dental treatment of two cousins of the same child. The author recommends effective health education for parents including the nature of their child's genetic disorder, nutritional needs, and dental health education to improve the life style of such children.

Andrew R. C. Milner, N Sakati, S. Sanjad … (1991)
Twelve infants (six boys, six girls) with severe hypocalcaemic tetany or convulsions were seen over a three year period. Nine patients were symptomatic in the newborn period. Their hypocalcaemia was associated with hyperphosphataemia and very low concentrations of immunoreactive parathyroid hormone. None of the babies suffered from congenital cardiac disease. Cell mediated immunity, measured in five patients, was normal. There were no chromosomal abnormalities but all patients shared several dysmorphic features including deep set eyes, microcephaly, thin lips, beaked nose tip, external ear anomalies, micrognathia, and depressed nasal bridge. Mental retardation of varying degree was found in all patients. All had severe intrauterine and postnatal growth retardation. Four patients have died. The remaining eight patients are on treatments with vitamin D and calcium supplements with no change in their growth pattern. We believe that this association of congenital hypoparathyroidism with severe growth failure and dysmorphism represents a new syndrome.

The dentofacial features of Sanjad-Sakati syndrome: a case report.

Elfatih Malik (2004)
Sanjad-Sakati syndrome is an autosomal recessive disorder that was first reported by Sanjad et al. in 1988. It is characterized by congenital hypoparathyroidism, severe growth failure and dysmorphic features. The clinical features include deep set eyes, microcephaly, thin lips, depressed nasal bridge with beaked nose, external ear anomalies and learning difficulties. This report presents the case of a 4-year-old patient who was referred to our dental clinic because of pain in her mouth and poor dental health. Oral findings included micrognathic mandible and maxilla, microdontia, enamel hypoplasia as well as severely decayed teeth. Treatment was carried out under general anaesthesia to extract the most severely affected teeth and restore those which could be conserved. It was concluded that these patients have special dental needs; early diagnosis of the affected children is therefore important in order to commence preventive dental therapy and carry out appropriate dental treatment at the optimum time.

R Richardson, J. M. Kirk (1990)
Eight children (four boys and four girls) with extreme failure to thrive, dysmorphic features, developmental delay, hypoparathyroidism, and abnormal skeletal survey were studied. They were the products of seven consanguinous marriages, two of the patients being brothers. In the remaining six families, a further four children had affected siblings who had died in infancy. When assessed the children were aged 0.47-12.8 years; SD scores were less than -2 for height, weight, and head circumference in all patients. The children had identical facies with deep set eyes, depressed nasal bridge with beaked nose, long philtrum, thin upper lip, micrognathia, and large floppy earlobes. They were all developmentally retarded. The following abnormalities were found on investigation: hypocalcaemia in all (of whom six of seven had hypoparathyroidism), medullary stenosis and other skeletal survey defects in seven of the eight children, and reduced numbers of T cell subsets in four of four tested. We believe that these children represent a new, as yet undescribed genetically determined syndrome.

Academic Editors: I. Anic, A. Epivatianos, and E. F. Wright