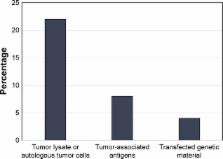 Glioblastoma (GBM) is the most common and fatal primary adult brain tumor. To date, various promising chemotherapeutic regimens have been trialed for use in GBM; however, temozolomide (TMZ) therapy remains the only US Food and Drug Administration-approved first-line chemotherapeutic option for newly diagnosed GBM. Despite maximal therapy with surgery and combined concurrent chemoradiation and adjuvant TMZ therapy, the median overall survival remains approximately 14 months. Given the failure of conventional chemotherapeutic strategies in GBM, there has been renewed interest in the role of immunotherapy in GBM. Dendritic cells are immune antigen-presenting cells that play a role in both the innate and adaptive immune system, thereby making them prime vehicles for immunotherapy via dendritic cell vaccinations (DCVs) in various cancers. There is great enthusiasm surrounding the use of DCVs for GBM with multiple ongoing trials. In this review, we comprehensively summarize the safety, efficacy, and quality of life results from 33 trials reporting on DCV for high-grade gliomas.

Andrew A. Rosenberg,  Chunying Yang,  Nicholas Restifo … (2004)
Great progress has been made in the field of tumor immunology in the past decade, but optimism about the clinical application of currently available cancer vaccine approaches is based more on surrogate endpoints than on clinical tumor regression. In our cancer vaccine trials of 440 patients, the objective response rate was low (2.6%), and comparable to the results obtained by others. We consider here results in cancer vaccine trials and highlight alternate strategies that mediate cancer regression in preclinical and clinical models.