A review of interactions between peripheral and foveal vision 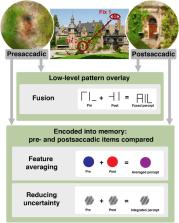 Speed of processing in the human visual system.

Simon Thorpe, Denis Fize, Catherine Marlot (1996)
How long does it take for the human visual system to process a complex natural image? Subjectively, recognition of familiar objects and scenes appears to be virtually instantaneous, but measuring this processing time experimentally has proved difficult. Behavioural measures such as reaction times can be used, but these include not only visual processing but also the time required for response execution. However, event-related potentials (ERPs) can sometimes reveal signs of neural processing well before the motor output. Here we use a go/no-go categorization task in which subjects have to decide whether a previously unseen photograph, flashed on for just 20 ms, contains an animal. ERP analysis revealed a frontal negativity specific to no-go trials that develops roughly 150 ms after stimulus onset. We conclude that the visual processing needed to perform this highly demanding task can be achieved in under 150 ms.

The distinct modes of vision offered by feedforward and recurrent processing.

Victor Lamme, Pieter Roelfsema (2000)
An analysis of response latencies shows that when an image is presented to the visual system, neuronal activity is rapidly routed to a large number of visual areas. However, the activity of cortical neurons is not determined by this feedforward sweep alone. Horizontal connections within areas, and higher areas providing feedback, result in dynamic changes in tuning. The differences between feedforward and recurrent processing could prove pivotal in understanding the distinctions between attentive and pre-attentive vision as well as between conscious and unconscious vision. The feedforward sweep rapidly groups feature constellations that are hardwired in the visual brain, yet is probably incapable of yielding visual awareness; in many cases, recurrent processing is necessary before the features of an object are attentively grouped and the stimulus can enter consciousness.

David Alais, David Burr (2004)
Ventriloquism is the ancient art of making one's voice appear to come from elsewhere, an art exploited by the Greek and Roman oracles, and possibly earlier. We regularly experience the effect when watching television and movies, where the voices seem to emanate from the actors' lips rather than from the actual sound source. Originally, ventriloquism was explained by performers projecting sound to their puppets by special techniques, but more recently it is assumed that ventriloquism results from vision "capturing" sound. In this study we investigate spatial localization of audio-visual stimuli. When visual localization is good, vision does indeed dominate and capture sound. However, for severely blurred visual stimuli (that are poorly localized), the reverse holds: sound captures vision. For less blurred stimuli, neither sense dominates and perception follows the mean position. Precision of bimodal localization is usually better than either the visual or the auditory unimodal presentation. All the results are well explained not by one sense capturing the other, but by a simple model of optimal combination of visual and auditory information.