Hyperinsulinemia in Individuals with obesity: Role of Insulin Clearance 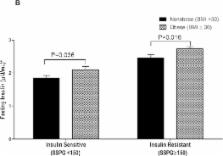 Several studies have shown decreased insulin clearance rate (ICR) in individuals with obesity, but it remains unclear whether this is predominately due to obesity-associated insulin resistance (IR) or obesity itself. We aimed to clarify the complex interrelationship that exists between obesity, IR and ICR.

Healthy volunteers (n = 277) had measurement of IR and ICR using the insulin suppression test (IST). IR was quantified by determining the steady-state plasma glucose (SSPG) during the IST. ICR was estimated by dividing the insulin infusion rate by the steady-state plasma insulin concentration. We performed our analysis by stratifying the experimental population into 4 dichotomous categories, varying in obesity and IR. Obesity was defined as a body mass index (BMI) ≥ 30 kg/m 2, and IR was defined as SSPG ≥ 150 mg/dl.

Reduced ICR in obesity is secondary to IR, not excess adiposity.

Insulin resistance as a predictor of age-related diseases.

Resistance to insulin-mediated glucose disposal as a predictor of cardiovascular disease.

J Yip,  G M Reaven,  F Facchini (1998)
Resistance to insulin-mediated glucose disposal has been postulated to predispose individuals to a cluster of associated abnormalities (Syndrome X) known to increase risk of cardiovascular disease (CVD). Although several abnormalities subsumed under the rubric of Syndrome X have been shown to predict CVD, there has been no prospective study evaluating the power of insulin resistance, the putative fundamental defect in the syndrome, in this context. Therefore, this study was initiated to evaluate the hypothesis that resistance to insulin-mediated glucose disposal would predict the development of CVD in healthy volunteers. To accomplish this goal, 147 normal, healthy, nonobese, volunteers were evaluated [4.7 +/- 0.1 yr (mean +/- SEM)] after baseline measurements of steady state plasma glucose concentration (an estimate of insulin-mediated glucose disposal), as well as other CVD risk factors. Clinical end points developed in 13 subjects during the follow-up period; hypertension in 5, coronary artery disease in 4, cerebrovascular accident in 3, and peripheral vascular disease in 1. There was a significant univariate relationship between SSPG and CVD (P < 0.002), with the majority of the events taking place in the tertile of subjects with the highest SSPG concentration, i.e. the greatest degree of insulin resistance. In contrast, no CVD events were observed in the tertile with the lowest SSPG concentrations; the most insulin sensitive. SSPG was also related significantly to diastolic blood pressure, triglyceride, and low-density lipoprotein and high-density lipoprotein cholesterol concentrations, and the glucose and insulin responses to oral glucose. All of these relationships were independent of age, gender, body mass index, estimates of physical activity, and smoking history. When SSPG was paired with each of the other variables in a series of multiple regression models, only SSPG, or insulin response, were independent predictors of CVD events. In conclusion, approximately one of every five healthy, nonobese subjects in the most insulin-resistant tertile, followed for approximately 5 yr, had a serious clinical event. These data highlight the importance of insulin resistance as a predictor of CVD.