The Role of Culex pipiens L. (Diptera: Culicidae) in Virus Transmission in Europe 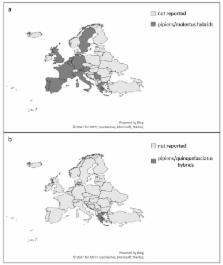 Over the past three decades, a range of mosquito-borne viruses that threaten public and veterinary health have emerged or re-emerged in Europe. Mosquito surveillance activities have highlighted the Culex pipiens species complex as being critical for the maintenance of a number of these viruses. This species complex contains morphologically similar forms that exhibit variation in phenotypes that can influence the probability of virus transmission. Critical amongst these is the choice of host on which to feed, with different forms showing different feeding preferences. This influences the ability of the mosquito to vector viruses and facilitate transmission of viruses to humans and domestic animals. Biases towards blood-feeding on avian or mammalian hosts have been demonstrated for different Cx. pipiens ecoforms and emerging evidence of hybrid populations across Europe adds another level of complexity to virus transmission. A range of molecular methods based on DNA have been developed to enable discrimination between morphologically indistinguishable forms, although this remains an active area of research. This review provides a comprehensive overview of developments in the understanding of the ecology, behaviour and genetics of Cx. pipiens in Europe, and how this influences arbovirus transmission.

Origin of the West Nile virus responsible for an outbreak of encephalitis in the northeastern United States.

J. H. Scherret,  R Lanciotti,  B Panigrahy … (1999)
In late summer 1999, an outbreak of human encephalitis occurred in the northeastern United States that was concurrent with extensive mortality in crows (Corvus species) as well as the deaths of several exotic birds at a zoological park in the same area. Complete genome sequencing of a flavivirus isolated from the brain of a dead Chilean flamingo (Phoenicopterus chilensis), together with partial sequence analysis of envelope glycoprotein (E-glycoprotein) genes amplified from several other species including mosquitoes and two fatal human cases, revealed that West Nile (WN) virus circulated in natural transmission cycles and was responsible for the human disease. Antigenic mapping with E-glycoprotein-specific monoclonal antibodies and E-glycoprotein phylogenetic analysis confirmed these viruses as WN. This North American WN virus was most closely related to a WN virus isolated from a dead goose in Israel in 1998.

Kai-Hui Yao,  Jingyuan Song,  Chang Liu … (2010)
Background The internal transcribed spacer 2 (ITS2) region of nuclear ribosomal DNA is regarded as one of the candidate DNA barcodes because it possesses a number of valuable characteristics, such as the availability of conserved regions for designing universal primers, the ease of its amplification, and sufficient variability to distinguish even closely related species. However, a general analysis of its ability to discriminate species in a comprehensive sample set is lacking. Methodology/Principal Findings In the current study, 50,790 plant and 12,221 animal ITS2 sequences downloaded from GenBank were evaluated according to sequence length, GC content, intra- and inter-specific divergence, and efficiency of identification. The results show that the inter-specific divergence of congeneric species in plants and animals was greater than its corresponding intra-specific variations. The success rates for using the ITS2 region to identify dicotyledons, monocotyledons, gymnosperms, ferns, mosses, and animals were 76.1%, 74.2%, 67.1%, 88.1%, 77.4%, and 91.7% at the species level, respectively. The ITS2 region unveiled a different ability to identify closely related species within different families and genera. The secondary structure of the ITS2 region could provide useful information for species identification and could be considered as a molecular morphological characteristic. Conclusions/Significance As one of the most popular phylogenetic markers for eukaryota, we propose that the ITS2 locus should be used as a universal DNA barcode for identifying plant species and as a complementary locus for CO1 to identify animal species. We have also developed a web application to facilitate ITS2-based cross-kingdom species identification (http://its2-plantidit.dnsalias.org).