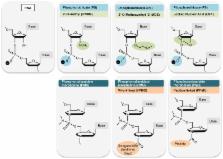 Splice-switching oligonucleotides (SSOs) are short, synthetic, antisense, modified nucleic acids that base-pair with a pre-mRNA and disrupt the normal splicing repertoire of the transcript by blocking the RNA–RNA base-pairing or protein–RNA binding interactions that occur between components of the splicing machinery and the pre-mRNA. Splicing of pre-mRNA is required for the proper expression of the vast majority of protein-coding genes, and thus, targeting the process offers a means to manipulate protein production from a gene. Splicing modulation is particularly valuable in cases of disease caused by mutations that lead to disruption of normal splicing or when interfering with the normal splicing process of a gene transcript may be therapeutic. SSOs offer an effective and specific way to target and alter splicing in a therapeutic manner. Here, we discuss the different approaches used to target and alter pre-mRNA splicing with SSOs. We detail the modifications to the nucleic acids that make them promising therapeutics and discuss the challenges to creating effective SSO drugs. We highlight the development of SSOs designed to treat Duchenne muscular dystrophy and spinal muscular atrophy, which are currently being tested in clinical trials.

Deep surveying of alternative splicing complexity in the human transcriptome by high-throughput sequencing.

Jennifer Smith,  Francis Clark,  Arianne J. Matlin … (2005)
In violation of the 'one gene, one polypeptide' rule, alternative splicing allows individual genes to produce multiple protein isoforms - thereby playing a central part in generating complex proteomes. Alternative splicing also has a largely hidden function in quantitative gene control, by targeting RNAs for nonsense-mediated decay. Traditional gene-by-gene investigations of alternative splicing mechanisms are now being complemented by global approaches. These promise to reveal details of the nature and operation of cellular codes that are constituted by combinations of regulatory elements in pre-mRNA substrates and by cellular complements of splicing regulators, which together determine regulated splicing pathways.