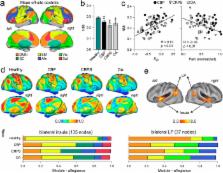 Chronic pain remains poorly understood; yet it is associated with the reorganization of the nervous system. Here, we demonstrate that a unitary global measure of functional connectivity, defined as the extent of degree rank order disruption, k D , identifies the chronic pain state. In contrast, local degree disruption differentiates between chronic pain conditions. We used resting-state functional MRI data to analyze the brain connectome at varying scales and densities. In three chronic pain conditions, we observe disrupted k D , in proportion to individuals’ pain intensity, and associated with community membership disruption. Additionally, we observe regional degree changes, some of which were unique to each type of chronic pain. Subjects with recent onset of back pain exhibited emergence of k D only when the pain became chronic. Similarly, in neuropathic rats k D emerged weeks after injury, in proportion to pain-like behavior. Thus, we found comprehensive cross-species evidence for chronic pain being a state of global randomization of functional connectivity.

Donald Salter,  Eric C. Woolf (2000)
We describe those sensations that are unpleasant, intense, or distressing as painful. Pain is not homogeneous, however, and comprises three categories: physiological, inflammatory, and neuropathic pain. Multiple mechanisms contribute, each of which is subject to or an expression of neural plasticity-the capacity of neurons to change their function, chemical profile, or structure. Here, we develop a conceptual framework for the contribution of plasticity in primary sensory and dorsal horn neurons to the pathogenesis of pain, identifying distinct forms of plasticity, which we term activation, modulation, and modification, that by increasing gain, elicit pain hypersensitivity.

R Melzack (1987)
A short form of the McGill Pain Questionnaire (SF-MPQ) has been developed. The main component of the SF-MPQ consists of 15 descriptors (11 sensory; 4 affective) which are rated on an intensity scale as 0 = none, 1 = mild, 2 = moderate or 3 = severe. Three pain scores are derived from the sum of the intensity rank values of the words chosen for sensory, affective and total descriptors. The SF-MPQ also includes the Present Pain Intensity (PPI) index of the standard MPQ and a visual analogue scale (VAS). The SF-MPQ scores obtained from patients in post-surgical and obstetrical wards and physiotherapy and dental departments were compared to the scores obtained with the standard MPQ. The correlations were consistently high and significant. The SF-MPQ was also shown to be sufficiently sensitive to demonstrate differences due to treatment at statistical levels comparable to those obtained with the standard form. The SF-MPQ shows promise as a useful tool in situations in which the standard MPQ takes too long to administer, yet qualitative information is desired and the PPI and VAS are inadequate.