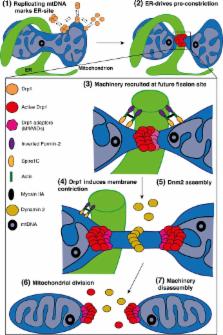 Mitochondria are highly dynamic organelles undergoing coordinated cycles of fission and fusion, referred as ‘mitochondrial dynamics’, in order to maintain their shape, distribution and size. Their transient and rapid morphological adaptations are crucial for many cellular processes such as cell cycle, immunity, apoptosis and mitochondrial quality control. Mutations in the core machinery components and defects in mitochondrial dynamics have been associated with numerous human diseases. These dynamic transitions are mainly ensured by large GTPases belonging to the Dynamin family. Mitochondrial fission is a multi-step process allowing the division of one mitochondrion in two daughter mitochondria. It is regulated by the recruitment of the GTPase Dynamin-related protein 1 (Drp1) by adaptors at actin- and endoplasmic reticulum-mediated mitochondrial constriction sites. Drp1 oligomerization followed by mitochondrial constriction leads to the recruitment of Dynamin 2 to terminate membrane scission. Inner mitochondrial membrane constriction has been proposed to be an independent process regulated by calcium influx. Mitochondrial fusion is driven by a two-step process with the outer mitochondrial membrane fusion mediated by mitofusins 1 and 2 followed by inner membrane fusion, mediated by optic atrophy 1. In addition to the role of membrane lipid composition, several members of the machinery can undergo post-translational modifications modulating these processes. Understanding the molecular mechanisms controlling mitochondrial dynamics is crucial to decipher how mitochondrial shape meets the function and to increase the knowledge on the molecular basis of diseases associated with morphology defects. This article will describe an overview of the molecular mechanisms that govern mitochondrial fission and fusion in mammals.

Naotada Ishihara,  Masatoshi Nomura,  Akihiro Jofuku … (2009)
Mitochondrial morphology is dynamically controlled by a balance between fusion and fission. The physiological importance of mitochondrial fission in vertebrates is less clearly defined than that of mitochondrial fusion. Here we show that mice lacking the mitochondrial fission GTPase Drp1 have developmental abnormalities, particularly in the forebrain, and die after embryonic day 12.5. Neural cell-specific (NS) Drp1(-/-) mice die shortly after birth as a result of brain hypoplasia with apoptosis. Primary culture of NS-Drp1(-/-) mouse forebrain showed a decreased number of neurites and defective synapse formation, thought to be due to aggregated mitochondria that failed to distribute properly within the cell processes. These defects were reflected by abnormal forebrain development and highlight the importance of Drp1-dependent mitochondrial fission within highly polarized cells such as neurons. Moreover, Drp1(-/-) murine embryonic fibroblasts and embryonic stem cells revealed that Drp1 is required for a normal rate of cytochrome c release and caspase activation during apoptosis, although mitochondrial outer membrane permeabilization, as examined by the release of Smac/Diablo and Tim8a, may occur independently of Drp1 activity.

Manuel Palacín,  Antonio Zorzano,  Marc Liesa (2009)
The meaning of the word mitochondrion (from the Greek mitos, meaning thread, and chondros, grain) illustrates that the heterogeneity of mitochondrial morphology has been known since the first descriptions of this organelle. Such a heterogeneous morphology is explained by the dynamic nature of mitochondria. Mitochondrial dynamics is a concept that includes the movement of mitochondria along the cytoskeleton, the regulation of mitochondrial architecture (morphology and distribution), and connectivity mediated by tethering and fusion/fission events. The relevance of these events in mitochondrial and cell physiology has been partially unraveled after the identification of the genes responsible for mitochondrial fusion and fission. Furthermore, during the last decade, it has been identified that mutations in two mitochondrial fusion genes (MFN2 and OPA1) cause prevalent neurodegenerative diseases (Charcot-Marie Tooth type 2A and Kjer disease/autosomal dominant optic atrophy). In addition, other diseases such as type 2 diabetes or vascular proliferative disorders show impaired MFN2 expression. Altogether, these findings have established mitochondrial dynamics as a consolidated area in cellular physiology. Here we review the most significant findings in the field of mitochondrial dynamics in mammalian cells and their implication in human pathologies.

Zhiyin Song,  Hsiuchen Chen,  Maja Fiket … (2007)
OPA1, a dynamin-related guanosine triphosphatase mutated in dominant optic atrophy, is required for the fusion of mitochondria. Proteolytic cleavage by the mitochondrial processing peptidase generates long isoforms from eight messenger RNA (mRNA) splice forms, whereas further cleavages at protease sites S1 and S2 generate short forms. Using OPA1-null cells, we developed a cellular system to study how individual OPA1 splice forms function in mitochondrial fusion. Only mRNA splice forms that generate a long isoform in addition to one or more short isoforms support substantial mitochondrial fusion activity. On their own, long and short OPA1 isoforms have little activity, but, when coexpressed, they functionally complement each other. Loss of mitochondrial membrane potential destabilizes the long isoforms and enhances the cleavage of OPA1 at S1 but not S2. Cleavage at S2 is regulated by the i-AAA protease Yme1L. Our results suggest that mammalian cells have multiple pathways to control mitochondrial fusion through regulation of the spectrum of OPA1 isoforms.