The ‘SELection End points in Communities of bacTeria’ (SELECT) Method: A Novel Experimental Assay to Facilitate Risk Assessment of Selection for Antimicrobial Resistance in the Environment 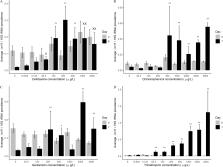 Antimicrobial resistance (AMR) is one of the most significant health threats to society. A growing body of research demonstrates selection for AMR likely occurs at environmental concentrations of antibiotics. However, no standardized experimental approaches for determining selective concentrations of antimicrobials currently exist, preventing appropriate environmental and human health risk assessment of AMR.

Previously published methods and data were used to validate the assay, which determines the effect concentration based on reduction of bacterial community (wastewater) growth. Risk quotients for test antibiotics were generated to quantify risk.

The lack of evidence demonstrating environmental selection for AMR, and of associated human health risks, is a primary reason for the lack of action in the mitigation of release of antibiotics into the aquatic environment. We present a novel method that can reliably and rapidly fill this data gap to enable regulation and subsequent mitigation (where required) to lower the risk of selection for, and human exposure to, AMR in aquatic environments. In particular, ciprofloxacin and, to a lesser extent, azithromycin, cefotaxime, and trimethoprim all pose a significant risk for selection of AMR in the environment. https://doi.org/10.1289/EHP6635

Enrico Coiera,  Guy Tsafnat,  Jonathan Iredell … (2009)
Gene cassettes are small mobile elements, consisting of little more than a single gene and recombination site, which are captured by larger elements called integrons. Several cassettes may be inserted into the same integron forming a tandem array. The discovery of integrons in the chromosome of many species has led to the identification of thousands of gene cassettes, mostly of unknown function, while integrons associated with transposons and plasmids carry mainly antibiotic resistance genes and constitute an important means of spreading resistance. An updated compilation of gene cassettes found in sequences of such 'mobile resistance integrons' in GenBank was facilitated by a specially developed automated annotation system. At least 130 different (<98% identical) cassettes that carry known or predicted antibiotic resistance genes were identified, along with many cassettes of unknown function. We list exemplar GenBank accession numbers for each and address some nomenclature issues. Various modifications to cassettes, some of which may be useful in tracking cassette epidemiology, are also described. Despite potential biases in the GenBank dataset, preliminary analysis of cassette distribution suggests interesting differences between cassettes and may provide useful information to direct more systematic studies.

Davide Giavarina (2015)
In a contemporary clinical laboratory it is very common to have to assess the agreement between two quantitative methods of measurement. The correct statistical approach to assess this degree of agreement is not obvious. Correlation and regression studies are frequently proposed. However, correlation studies the relationship between one variable and another, not the differences, and it is not recommended as a method for assessing the comparability between methods. In 1983 Altman and Bland (B&A) proposed an alternative analysis, based on the quantification of the agreement between two quantitative measurements by studying the mean difference and constructing limits of agreement. The B&A plot analysis is a simple way to evaluate a bias between the mean differences, and to estimate an agreement interval, within which 95% of the differences of the second method, compared to the first one, fall. Data can be analyzed both as unit differences plot and as percentage differences plot. The B&A plot method only defines the intervals of agreements, it does not say whether those limits are acceptable or not. Acceptable limits must be defined a priori, based on clinical necessity, biological considerations or other goals. The aim of this article is to provide guidance on the use and interpretation of Bland Altman analysis in method comparison studies.