What factors are associated with recent intimate partner violence? findings from the WHO multi-country study on women's health and domestic violence 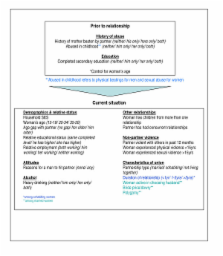 Intimate partner violence (IPV) against women is a global public health and human rights concern. Despite a growing body of research into risk factors for IPV, methodological differences limit the extent to which comparisons can be made between studies. We used data from ten countries included in the WHO Multi-country Study on Women's Health and Domestic Violence to identify factors that are consistently associated with abuse across sites, in order to inform the design of IPV prevention programs.

Standardised population-based household surveys were done between 2000 and 2003. One woman aged 15-49 years was randomly selected from each sampled household. Those who had ever had a male partner were asked about their experiences of physically and sexually violent acts. We performed multivariate logistic regression to identify predictors of physical and/or sexual partner violence within the past 12 months.

Despite wide variations in the prevalence of IPV, many factors affected IPV risk similarly across sites. Secondary education, high SES, and formal marriage offered protection, while alcohol abuse, cohabitation, young age, attitudes supportive of wife beating, having outside sexual partners, experiencing childhood abuse, growing up with domestic violence, and experiencing or perpetrating other forms of violence in adulthood, increased the risk of IPV. The strength of the association was greatest when both the woman and her partner had the risk factor.

IPV prevention programs should increase focus on transforming gender norms and attitudes, addressing childhood abuse, and reducing harmful drinking. Development initiatives to improve access to education for girls and boys may also have an important role in violence prevention.

Prevalence of intimate partner violence: findings from the WHO multi-country study on women's health and domestic violence.

Mary Ellsberg,  ,  Tania H. Watts … (2006)
Violence against women is a serious human rights abuse and public health issue. Despite growing evidence of the size of the problem, current evidence comes largely from industrialised settings, and methodological differences limit the extent to which comparisons can be made between studies. We aimed to estimate the extent of physical and sexual intimate partner violence against women in 15 sites in ten countries: Bangladesh, Brazil, Ethiopia, Japan, Namibia, Peru, Samoa, Serbia and Montenegro, Thailand, and the United Republic of Tanzania. Standardised population-based household surveys were done between 2000 and 2003. Women aged 15-49 years were interviewed and those who had ever had a male partner were asked in private about their experiences of physically and sexually violent and emotionally abusive acts. 24,097 women completed interviews, with around 1500 interviews per site. The reported lifetime prevalence of physical or sexual partner violence, or both, varied from 15% to 71%, with two sites having a prevalence of less than 25%, seven between 25% and 50%, and six between 50% and 75%. Between 4% and 54% of respondents reported physical or sexual partner violence, or both, in the past year. Men who were more controlling were more likely to be violent against their partners. In all but one setting women were at far greater risk of physical or sexual violence by a partner than from violence by other people. The findings confirm that physical and sexual partner violence against women is widespread. The variation in prevalence within and between settings highlights that this violence in not inevitable, and must be addressed.

The world report on violence and health.

Etienne Krug,  J A Mercy,  L Dahlberg … (2002)
In 1996, the World Health Assembly declared violence a major public health issue. To follow up on this resolution, on Oct 3 this year, WHO released the first World Report on Violence and Health. The report analyses different types of violence including child abuse and neglect, youth violence, intimate partner violence, sexual violence, elder abuse, self-directed violence, and collective violence. For all these types of violence, the report explores the magnitude of the health and social effects, the risk and protective factors, and the types of prevention efforts that have been initiated. The launch of the report will be followed by a 1-year Global Campaign on Violence Prevention, focusing on implementation of the recommendations. This article summarises some of the main points of the world report.

Intimate partner violence and women's physical and mental health in the WHO multi-country study on women's health and domestic violence: an observational study.

Tania H. Watts,  ,  Anita Jansen … (2008)
This article summarises findings from ten countries from the WHO multi-country study on women's health and domestic violence against women. Standardised population-based surveys were done between 2000 and 2003. Women aged 15-49 years were interviewed about their experiences of physically and sexually violent acts by a current or former intimate male partner, and about selected symptoms associated with physical and mental health. The women reporting physical violence by a partner were asked about injuries that resulted from this type of violence. 24,097 women completed interviews. Pooled analysis of all sites found significant associations between lifetime experiences of partner violence and self-reported poor health (odds ratio 1.6 [95% CI 1.5-1.8]), and with specific health problems in the previous 4 weeks: difficulty walking (1.6 [1.5-1.8]), difficulty with daily activities (1.6 [1.5-1.8]), pain (1.6 [1.5-1.7]), memory loss (1.8 [1.6-2.0]), dizziness (1.7 [1.6-1.8]), and vaginal discharge (1.8 [1.7-2.0]). For all settings combined, women who reported partner violence at least once in their life reported significantly more emotional distress, suicidal thoughts (2.9 [2.7-3.2]), and suicidal attempts (3.8 [3.3-4.5]), than non-abused women. These significant associations were maintained in almost all of the sites. Between 19% and 55% of women who had ever been physically abused by their partner were ever injured. In addition to being a breach of human rights, intimate partner violence is associated with serious public-health consequences that should be addressed in national and global health policies and programmes.