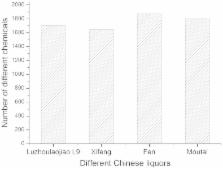 Luzhoulaojiao liquor is a type of Chinese liquor that dates back hundreds of years, but whose precise chemical composition remains unknown. This paper describes the screening of the liquor and the identification of its compounds using comprehensive two-dimensional gas chromatography/time-of-flight mass spectrometry (GC × GC/TOF-MS). Samples were prepared by both liquid-liquid extraction and solid-phase microextraction, which facilitated the detection of thousands of compounds in the liquor, thus demonstrating the superior performance of the proposed method over those reported in previous studies. A total of 320 compounds were common to all 18 types of Luzhoulaojiao liquor studied here, and 13 abundant and potentially bioactive compounds were further quantified. The results indicated that the high-performance method presented here is well suited for the detection and identification of compounds in liquors. This study also contributes to enriching our knowledge of the contents of Chinese liquors.

Bettina Keller,  Thomas Grau,  Ronald G. Schoenmakers … (2008)
Synthetic biology provides insight into natural gene-network dynamics and enables assembly of engineered transcription circuitries for production of difficult-to-access therapeutic molecules. In Mycobacterium tuberculosis EthR binds to a specific operator (O(ethR)) thereby repressing ethA and preventing EthA-catalyzed conversion of the prodrug ethionamide, which increases the resistance of the pathogen to this last-line-of-defense treatment. We have designed a synthetic mammalian gene circuit that senses the EthR-O(ethR) interaction in human cells and produces a quantitative reporter gene expression readout. Challenging of the synthetic network with compounds of a rationally designed chemical library revealed 2-phenylethyl-butyrate as a nontoxic substance that abolished EthR's repressor function inside human cells, in mice, and within M. tuberculosis where it triggered derepression of ethA and increased the sensitivity of this pathogen to ethionamide. The discovery of antituberculosis compounds by using synthetic mammalian gene circuits may establish a new line of defense against multidrug-resistant M. tuberculosis.

Recent developments in the application of comprehensive two-dimensional gas chromatography.

J Beens,  M Adahchour,  Udo A Th Brinkman (2008)
The literature on comprehensive two-dimensional gas chromatography (GC x GC) is reviewed, with emphasis on application-oriented studies published in the period 2004-2006. The various strategies that can be used in such studies, the state-of-the-art analytical performance and the high potential of GC x GC combined with time-of-flight mass spectrometric detection are highlighted.

Shukui Zhu,  Xin-xin Lu,  Keliang Ji … (2007)
In this paper, a method to characterize the volatile compounds in Chinese liquors by comprehensive two-dimensional gas chromatography/time-of-flight mass spectrometry has been developed. The selection of column combination and the optimization of temperature program are discussed. With the optimized conditions, ordered chromatograms are achieved in the two-dimensional plane, which is useful for the identification of unknown compounds. According to the automated data processing by TOFMS software, combining with the ordered chromatogram and the retention index database developed by our group, a total of 528 components are identified in a Moutai liquor sample, including organic acids, alcohols, esters, ketones, aldehydes, acetals, lactones, nitrogen-containing and sulfur-containing compounds, etc. In addition, the contribution of some important aroma compounds to flavor of Moutai liquor has also been studied.