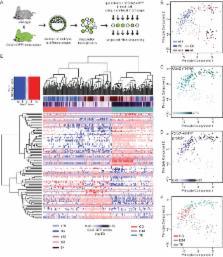 The segregation of the trophectoderm (TE) from the inner cell mass (ICM) in the mouse blastocyst is determined by position-dependent Hippo signaling. However, the window of responsiveness to Hippo signaling, the exact timing of lineage commitment and the overall relationship between cell commitment and global gene expression changes are still unclear. Single-cell RNA sequencing during lineage segregation revealed that the TE transcriptional profile stabilizes earlier than the ICM and prior to blastocyst formation. Using quantitative Cdx2-eGFP expression as a readout of Hippo signaling activity, we assessed the experimental potential of individual blastomeres based on their level of Cdx2-eGFP expression and correlated potential with gene expression dynamics. We find that TE specification and commitment coincide and occur at the time of transcriptional stabilization, whereas ICM cells still retain the ability to regenerate TE up to the early blastocyst stage. Plasticity of both lineages is coincident with their window of sensitivity to Hippo signaling.

In female mammals, conception is a complex process that involves several stages. First, an egg is released from the ovary and travels along a tube called the oviduct, where sperm from a male may fertilize it. If the egg is fertilized, the newly formed embryo moves into the womb, where it will then implant into the walls. In mice, it takes around four days for the embryo to implant and during this time, the cells in the embryo divide several times and start to specialize to form distinct cell types called lineages.

The first two lineages to form are known as the inner cell mass and the trophectoderm. The inner cell mass forms a ball of cells within the embryo and contains the precursors of all cells that build the animal’s body. The trophectoderm forms a layer that surrounds the inner cell mass and will become part of the placenta (the organ that supplies the embryo with nutrients while it is in the womb). The embryo can organize these lineages without any instructions from the mother. However, it is still not clear when the cells start to differ from each other, and when they ‘commit’ to stay in these lineages.

Cells in the inner cell mass and trophectoderm have different gene expression profiles, meaning that many genes display different levels of activity in these two lineages. Posfai et al. use a technique called single-cell RNA sequencing to analyse gene activity as the inner cell mass and trophectoderm form in mouse embryos. By measuring changes in gene activity, it is possible to track their development and show which genes change expression levels when each lineage specifies and commits.

These findings suggest that the different timings at which these cell lineages form might provide embryos with the means to organize their own cells. An important future challenge is to understand exactly how the cells commit to their fate.

Sarah Teichmann,  Simon Anders,  Valentina Proserpio … (2013)
Single-cell RNA-seq can yield valuable insights about the variability within a population of seemingly homogeneous cells. We developed a quantitative statistical method to distinguish true biological variability from the high levels of technical noise in single-cell experiments. Our approach quantifies the statistical significance of observed cell-to-cell variability in expression strength on a gene-by-gene basis. We validate our approach using two independent data sets from Arabidopsis thaliana and Mus musculus.

Guoji Guo,  Mikael Huss,  Guo Qing Tong … (2010)
Three distinct cell types are present within the 64-cell stage mouse blastocyst. We have investigated cellular development up to this stage using single-cell expression analysis of more than 500 cells. The 48 genes analyzed were selected in part based on a whole-embryo analysis of more than 800 transcription factors. We show that in the morula, blastomeres coexpress transcription factors specific to different lineages, but by the 64-cell stage three cell types can be clearly distinguished according to their quantitative expression profiles. We identify Id2 and Sox2 as the earliest markers of outer and inner cells, respectively. This is followed by an inverse correlation in expression for the receptor-ligand pair Fgfr2/Fgf4 in the early inner cell mass. Position and signaling events appear to precede the maturation of the transcriptional program. These results illustrate the power of single-cell expression analysis to provide insight into developmental mechanisms. The technique should be widely applicable to other biological systems. Copyright 2010 Elsevier Inc. All rights reserved.