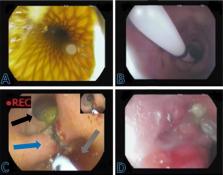 This is a retrospective study of consecutive patients referred to our hospital from 2015 to 2017 with post laparoscopic one anastomosis gastric bypass complications. Therapy was tailored to each case, including fully covered self-expandable metal stents, fibrin glue, septotomy, internal drainage with pigtail stents, through-the-scope and pneumatic dilation. Success was defined as resuming oral nutrition without enteral or parenteral support or further surgical intervention.

Nine patients presented with acute or early leaks: 5 (56%) had staple-line leaks, 3 (33%) had anastomotic leaks and 1 (11%) had both. All were treated with stents. Adjunctive endoscopic drainage was applied in 4 patients (44%). Overall 5 patients (56%) with acute/ early leaks recovered completely, including all 3 patients with anastomotic leak and the patient with both leaks but only 1/5 with staple line leak (20%). Complication rate in the leak group reached 22%. Eight patients presented with strictures, 7 at the anastomosis and one due to remnant stomach misalignment. All anastomotic strictures were dilated successfully. However, the patient with the pouch stricture required conversion to Roux-en-Y gastric bypass after 3 failed attempts of dilation.

Laparoscopic Roux-en-Y vs. mini-gastric bypass for the treatment of morbid obesity: a 10-year experience.

Kong-Han Ser,  Chien-Chou Chen,  J-H Tsou … (2012)
Laparoscopic Roux-en-Y gastric bypass (LRYGB) is considered the gold standard for the treatment of morbid obesity but is technically challenging and results in significant perioperative complications. While laparoscopic mini-gastric bypass (LMGB) has been reported to be a simple and effective treatment for morbid obesity, controversy exists. Long-term follow-up data from a large number of patients comparing LMGB to LRYGB are lacking. Between October 2001 and September 2010, 1,657 patients who received gastric bypass surgery (1,163 for LMGB and 494 for LRYGB) for their morbid obesity were recruited from our comprehensive obesity surgery center. Patients who received revision surgeries were excluded. Minimum follow-up was 1 year (mean 5.6 years, from 1 to 10 years). The operative time, estimated blood loss, length of hospital stay, and operative complications were assessed. Late complication, changes in body weight loss, BMI, quality of life, and comorbidities were determined at follow-up. Changes in quality of life were assessed using the Gastrointestinal Quality of Life Index. There was no difference in preoperative clinical parameters between the two groups. Surgical time was significantly longer for LRYGB (159.2 vs. 115.3 min for LMGB, p < 0.001). The major complication rate was borderline higher for LRYGB (3.2 vs. 1.8%, p = 0.07). At 5 years after surgery, the mean BMI was lower in LMGB than LRYGB (27.7 vs. 29.2, p < 0.05) and LMGB also had a higher excess weight loss than LRYGB (72.9 vs. 60.1%, p < 0.05). Postoperative gastrointestinal quality of life increased significantly after operation in both groups without any significant difference at 5 years. Obesity-related clinical parameters improved in both groups without significant difference, but LMGB had a lower hemoglobin level than LRYGB. Late revision rate was similar between LRYGB and LMGB (3.6 vs. 2.8%, p = 0.385). This study demonstrates that LMGBP can be regarded as a simpler and safer alternative to LRYGB with similar efficacy at a 10-year experience.

The laparoscopic mini-gastric bypass: the Italian experience: outcomes from 974 consecutive cases in a multicenter review.

M Musella,  A Susa,  F. GRECO … (2014)
Due to the failure of the "old Mason loop," the mini-gastric bypass (MGB) has been viewed with skepticism. During the past 12 years, a growing number of authors from around the world have continued to report excellent short- and long-term results with MGB.

Deborah Fantini,  G Casella,  F. Fiocca … (2009)
Laparoscopic sleeve gastrectomy (LSG) is gaining popularity as a "per se" bariatric procedure due to its effectiveness on weight loss and comorbidity resolution. The most feared and life-threatening complication after LSG is the staple line leak and its management is still a debated issue. Aim of this paper is to analyze the incidence of leak and the treatment solutions adopted in a consecutive series of 200 LSG. From October 2002 to November 2008, 200 patients underwent LSG. Nineteen patients (9.5%) had a body mass index (BMI) of >60 kg/m(2). A 48-Fr bougie is used to obtain an 80-120-ml gastric pouch. An oversewing running suture to reinforce the staple line was performed in the last 100 cases. The technique adopted to reinforce the staple line is a running suture taken through and through the complete stomach wall. Staple line leaks occurred in six patients (mean BMI 52.5; mean age 41.6 years). Leak presentation was early in three cases (first, second, and third postoperative (PO) day), late in the remaining three cases (11th, 22nd, and 30th PO day). The most common leak location was at the esophagogastric junction (five cases). Mortality was nihil. Nonoperative management (total parenteral nutrition, proton pump inhibitor, and antibiotics) was adopted in all cases. Percutaneous abdominal drainage was placed in five patients. In one case, a small fistula was successfully treated by endoscopic injection of fibrin glue only. Self-expandable covered stent was used in three cases. Complete healing of leaks was obtained in all patients (mean healing time 71 days). Nonoperative treatment (percutaneous drainage, endoscopy, stent) is feasible, safe, and effective for staple line leaks in patients undergoing LSG; furthermore, it may avoid more mutilating procedures such as total gastrectomy.